We made land fall around 0730 but there was very little land to see as the whole island was covered in rain showers. Rains showers before arrival are always good. They wash the salt off the decks and what falls before arrival cannot fall while you are going ashore. That worked out quite nicely as during the day we only had one bit of drizzle and for the rest sunshine only. The two other cruise ships were already docked and that left the port wide open to an unhindered approach for us. Normally the pilot comes out in a sort of workboat, called the bath tub by us, but it seems that some investments have taken place by the port authority so there is now a real pilot boat, nice and shiny that came alongside a lot easier than the contraption they used in the past.  The pilots here can work in at least three languages for piloting, Dutch, English and local and as our official shipboard language is English, all conversation took place in English although all on the bridge were completely Dutch. While the pilot was sailing the ship in on the correct courses, I concentrated on the slowing down of the ship, as we had to come to an almost complete standstill in order to make a 90o turn into the side berth. At the same time you want to keep “flow” on the rudders so the quartermaster can keep steering the pilots courses. That means that you have to slow down very gradually so the flow around the rudders also gradually gets less. That went well and with 1 knot headway we started to make the turn.

It just fits in between the two Piers.

It was very easy this time, the wind was pushing nicely on the funnel and I had hardly anything to do. It looked like as if the ship knew where she was going. Only once inside the slip I had to reduce speed more and gradually brought the ship closer to the dock.  We ended about 10 feet from the cross pier, having as much ship inside the berth to be able to set out good lines. The ship is 220 meters long and so is the pier and thus it just fits.  In the old days nobody would have dreamt about putting a ship like that alongside a berth but with cruising so popular, the ships are parked anywhere and everywhere that is convenient for the guests and the ships captains do not think anything of it. The good thing was that this berth has the shortest walking distance from the main street and that is in the warm weather not an unpleasant advantage. 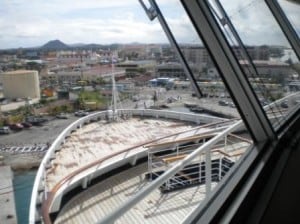 Cannot get any closer, even if I wanted to.

We stayed here until 1800 hrs and while the guests enjoyed Aruba, we continued with our inspection. Today we had an abandon ship drill on the list and again this berth was to our advantage as it sheltered the boats from the current that runs through the bay. Once that was done the divers moved in for a complete underwater inspection of the hull, rudders and propellers which is also part of the proceedings.  This inspection is monitored by the Lloyds inspectors on a remote camera/display and they can re-direct the divers to whatever they want to inspect more closely. The divers reported that everything was still attached and they could see that easily as we just had our hull cleaned during last call Fort Lauderdale. That was done by two divers with a sort of up-side-down brushing machine that runs on wheels along the hull. Apart from it being needed for this inspection, the cleaner the hull is, the less resistance through the water and the least fuel we use. Important, as the fuel prices keep going up. 4 weeks ago we paid $ 639 for a ton of HFO, this time it was $ 681 and Fort Lauderdale is not even one of the most expensive ports.

That all had to be done within the time frame of being in port as I needed to  leave on time in order to get to the Panama Canal.  I will only get the transit schedule tomorrow so I have to assume for the time being that they want us very early. So I am aiming for 0500 breakwater at Cristobal, as it is seldom any earlier. If it is going to be later, I can always slow down tomorrow.

Tomorrow is a sea day and I am looking at it with mixed feelings. Things are turning very nasty around Cuba at the moment with yet another front coming through and that is pushing a lot of rain and wind towards us. For Panama things look ok but tomorrow morning might be a wet and windy affair.