Around midnight we rounded Cabo Maisi, the east point of Cuba and entered the Windward Passage. It takes about six hours to sail through the passage and then you emerge south of cape Tiburon in the Caribbean Sea. Cape Tiburon is the south western point of Haiti. This area is called the Jamaican Passage as it is connected to that body of water between Jamaica and Cuba. We do not get even close to Jamaica but the area is called so nonetheless. The island of  Hispaniola, made up of Haiti and the Dominican Republic, acts as a sort of windbreaker, spoiler, for the trade winds that are blowing here. Thus the moment we disappeared under the coast of Haiti, the wind died down and that remained so until an un-interrupted flow could reach us again when we cleared Hispaniola mid morning. Then we were back to our regular trade wind influence of about 20 to 25 knots. That wind will remain with us all the way to Aruba and there on the lee side it should be slightly less as Oranjestad is on the Southside of the island. It is even in the shelter of the one mountain that they have there, (the Hooiberg, or haystack) which rises a majestic 300 feet above its surroundings. I want a weak wind on arrival as I have to angle the ship into the side pier, berth F, as the main cruise terminals are taken up by the Island Princess and the Horizon of Pullmantur. Berth F, is in principle the best berth as it has the shortest walking distance into the town. Easier for the guests, just a bit more work for me.

In the mean time life on board goes on and thus the inspection program of our Lloyds friends. Today it was testing pumps and pipe systems in the engine room and fire dampers all around the ship. Firedampers are shutters that can be closed to switch off ventilation and air-conditioning ducts from one area of the ship to another. In case of a fire you can isolate a whole section of the ship and so stop the fire from spreading from area to area. The fire gets boxed/contained in and then the fire squads can do the rest. We have a few hundred of these dampers on board and they all get tested on a regular basis. Thus Lloyds goes around and does spot checks. Based on their experience they know in what area’s you can expect problems (dampers exposed to sea air, or engine exhaust) and naturally they focus on those dampers more closely. We can close all the dampers from the bridge but they can also operated locally, one by one, something that is always preferable as then you can isolate one section but do not need to affect the rest. 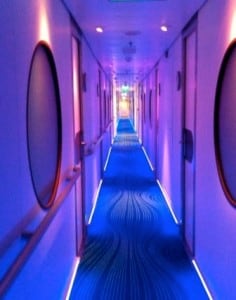 Corridor lighting, including the low level lighting strips near the skirting boards. Do not worry, this is not a corridor on a HAL ship.

Another item that generates a lot of attention is our low level lighting. Since about 10 years, ships are equipped with these strips of lights in the hallways and staircases. An idea that was taken over from the airline industry. Inspectors are quite hot on this item, because A it is a very important safety device but B it is prone to very much wear and tear due to traffic. For us in the ship it is a never ending story to keep the strips in good operating condition. People walking through the corridors, trolley’s, housekeeping with the shampooing and hovering, these strips get beaten up constantly. Therefore you seen them lit up quite often during the night. The night guard checks them all during his regular security rounds and then reports any omissions the next morning.  Thus an inspector will want to check if the system is fully operational and if it’s regularly maintained.

Down in the engine room the inspections also centre around tanks. Tanks get inspected on a regular cycle but there is always one or two due around the time of the PSSC and that then counts as an acceptable spot check. If they are double bottom tanks, then they have to be inspected in port. Opening up a tank cover at sea would endanger the safety of the ship in case we would get a collision or a grounding right at that time.  A remote chance but stranger things have happened at sea.

Tomorrow we are in Oranjestad Aruba . I expect to make land fall around 07.30 and to be at the pilot station at 08.45 with good warm weather and the occasional shower.