The Weather Gods are not always smiling upon us and today it looked like as if they had taken a break altogether from regulating the weather. On arrival the sky was overcast, it was rainy, windy and bleak. Apart from the wind strength forecast not being in synch with reality even the wind direction was different. Instead of the predicted NE wind (which we like as it keeps the ship away from the island) it was blowing instead from the SSE. (Which we do not like as it pushes the ship towards the island.

But it was workable thus we dropped anchor and kept one of the Azi pods going to provide a lee for the tenders along the boarding platform and to keep us away from the beach. The weather had one direct influence on the island pattern of the day: drinks were down and coffee consumption was up. Maybe something for market researchers to look into; an increase in clouds results in an increase in coffee consumption. The weather improved during the day but it never became a great day. 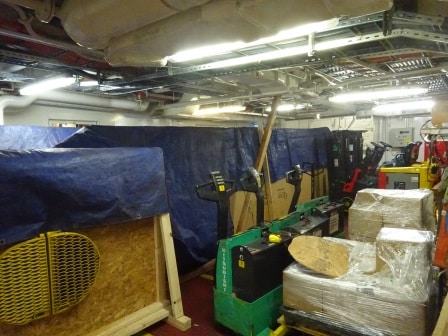 The tank as being rebuilt in the luggage area

I still have an outstanding matter to report and that is in relation to confined space training which I mentioned a few days ago. We did our training in St Thomas and for me the challenge was to come up with something realistic. With a confined space the main challenge is to create something which resembles reality, is within in the safety margins and can be built on board. The latter can be an issue as we do not have unlimited materials on board for everything we would like to do. 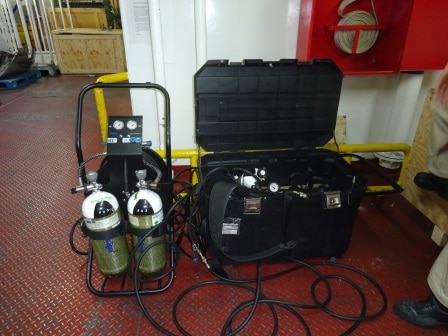 Air bottles for the rescue team.

But we managed. A combination of luggage bins (tank frame) half size pallets inside (simulating the frames in a tank) and a cover /tarpaulin over it (to make it dark) and we were in business. My main concern was the safety of those going in. Although it was only a mock up, you never know if somebody suddenly discovers he/she is claustrophobic. But we solved that one by using carton for the side walls which we could slide away in case of such an emergency. My class of eager beavers were quite proud of themselves when it was finished. 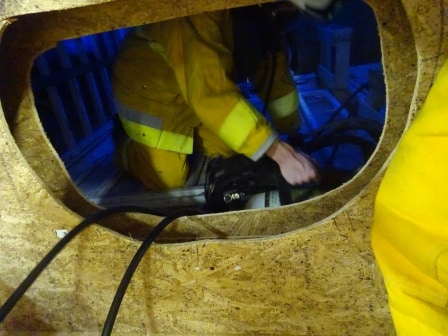 A tank opening is not easy to get into.

A confined space drill is about rescuing somebody from a tank or other enclosed space. That is the simple part. What happens in real life is, is that a second person goes inside without air supply and suffers a similar fate as the person already inside and who is supposed to be rescued.   Thus the mantra is all the time: first the equipment for yourself and then go for the casualty. We have all sorts of gadgets available for this and today we used it. Hip bottles for air, air bottles on carts with a long supply hose, stretchers, gas meters, checklists, it all came out and it was all used. 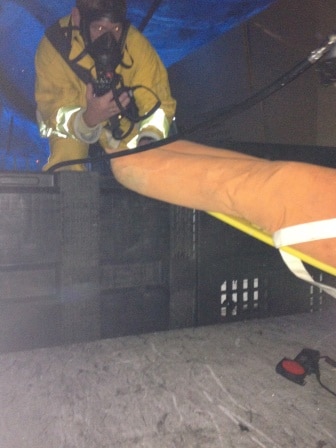 Getting the casualty out.

Drills are about learning and gaining experience. What did we learn? First, with a larger tank you need a dedicated (extra) person inside the tank for communication only. Somebody who can narrate to the outside world what the rescuers are doing, how the progress is and who can pass advise back. Secondly that small portable air bottles have preference over back packs. Thirdly that it is not easy to bring out an 80 kg. (160 pounds) unconscious casualty (dummy in our case) if you have to climb over steel frames and have to protect the casualty at the same time. The small “plank” stretcher proved invaluable. 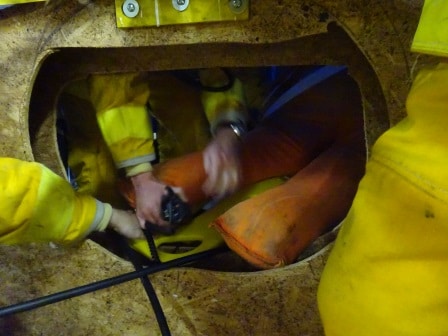 It was a great learning experience and the teams involved gained a lot of insight in safely retrieving somebody from inside a confined space. I hope to be able to repeat it on the other ships.

Today is the last day of the cruise, tomorrow the Westerdam will be back in Fort Lauderdale. Weather is supposed to look a lot better than here today with partly cloudy skies and decent temperatures. My class will go home and so will I.  So there will be one more blog to follow before I start enjoying my vacation.