Today we enjoyed a glorious day at sea. Following winds, partly cloudy skies and smooth seas. A perfect day to be on board. The guests had to make the difficult choice between enjoying this outside weather or partaking in the daily program activities, or the Mariners luncheon, or going to the sales in the shops. Not easy, especially not the sales, as we are getting closer to Christmas. Today the focus was very much on watches and related items as it is one of the things which will draw in men as well. As part of the retail experience the hope is then for the flow of traffic to start at those watches and then slowly move towards the more expensive items and ending up in the Mirabella store for the very good items. I have always lived by the 50% rule: I buy a book for 50 dollars and my wife a dress of 500 dollars and I think the shops hope that the couples flowing through live under a similar credo. He gets a cheap watch, she a nice ring.  It does keep for a happy marriage. 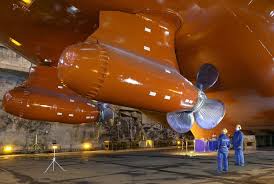 Pods are unusual in the way that the propeller is in the front. It pulls the ship forward instead of pushing it as a conventional propeller does.

In the meantime Captain van Eerten had set my class another challenge. Prepare a departure plan for Half Moon Cay and the one who wins will be allowed to “command departure” according to that plan.  The challenge here is to maneuver with the Azipods and that is a totally different ball game than with regular propellers. The way you handle Azi pods has more to do with thinking in handling the outboard engines of a speed boat than the regular way of the conventional ships. 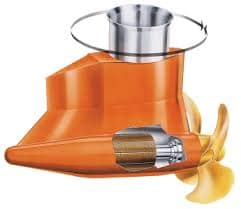 A Pod can turn 360o and provide the same power in each direction. Contrary to a conventional  propeller which has more power to give going forward than when going astern.

The great advantage of an Azipod is the flexibility and easiness of handling the thrust. Rudder, stern thruster and propeller are all combined. The challenge is to have the angles under which you set the pod right to insure the hull is pulled in the right direction and with the right inertia. Figuring out the optimum angles and thrust is the most complicated part of the maneuver.

In principle everybody can pull the handles. Push the arrow in the direction you want to go and the pod will start pushing that way. But only the point where the Pod is attached to the hull will go exactly that way.

The rest of the ship will follow but not as envisioned as there is water resistance, the length of the ship and the forces going through the ship which carry the momentum forward and the final force is not necessary where you thought it would go.

Thus you have to start thinking of the angle of the thrust in relation to the hull to get the required movement of the hull. The bow can be helped with the bow thruster but with two pods at right angles you can often get the correct turning and/or movement just on the pods alone.  Everybody can learn to use pods very quickly; in the same way as steering an outboard engine in a boat is not so difficult either. However to master the perfect use of a Pod, the right thrust with the right angle in every situation is an art which takes a very long time to learn and master.  Even captains who have been playing with Azipod ships for years are still learning new things if they are willing to experiment and look for the optimum. 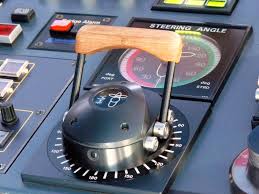 The bridge conttrol of the pod. The black knob turns 360o for the Pod and the handle provides the amount of thrust.

Thus the team had to prepare a plan to maneuver safely away from the anchorage by having the settings of the pods with the right (read the best) angles. It should result in an optimum turn of the ship to sea while using as little power as possible. So tomorrow afternoon we will have one of the group on the bridge and the others raising the anchor. The better the maneuver is conducted the easier it will be for the rest of the group to get the anchor out of the water and back up on deck again. So there is a little peer pressure involved as well.

In the meantime the ms Westerdam III (our first one sailed for Holland America in 1946 and the 2nd one in 1988) sailed happily onwards in the sunshine with very little swell around her and thus she was rock steady. Late this evening the set courses will bring the ship between the Bahamian Islands and then tomorrow morning we will approach Half Moon Cay anchorage from the south to drop the anchor at 07.30 to start our tender operation by 08.00 hrs. We are the only ship in and although the island can easily accommodate 5000 people without feeling crowded; being alone is nice as well.

The weather forecast predicts 78oF or 26oC. and very little wind and that should give a very warm day. However there is a good chance of a shower during the day and that will cool things down again.