It has been a long time since I saw a flat surfaced sea but that is what we had during the night and morning while we approached the port. It is nearing full moon and that moon hung as a big Dutch cheese in the sky with the bottom part cut out. The pilot station for Zeebrugge is quite a ways away from the port and thus we needed to be early. By 04.30 we were at the Wandelaar pilot station. “Wandelaar” means casual walker in Dutch and is the name of a sand bank in the area, which is know to shift around. The whole area is very shallow and full of sand banks, with only about 30 feet under the keel, hence the need for the pilot station to be so far out from the coast. The pilots are waiting on a large mother ship and are transferred to the approaching vessel by means of a small skiff. The Prinsendam is a firm favorite among the pilots as we have this very low side door that makes it possible for the pilot to walk straight into the ship without having to use a pilot ladder. Only if the pilot boat is very large itself, then we have to rig up the pilot ladder from a higher deck.

Zeebrugge is a port that developed because of Bruges and Bruges is the reason that we call at this port in the first place. In the old days Bruges was a itself major port but when the entrance river silted up, it lost it’s prominence. Slowly but steadily the little town of Zeebrugge at the coast gained more and more prominence and it is now the biggest Ro-Ro port (car imports) in Europe, the 2nd biggest container port in Belgium (after Antwerp) and also quite important for chemical products. The port consists of three parts. The inner port, which is inside a lock system to keep the tide out; the old outer port which is tidal and the new port which was constructed not that long ago outside the old breakwater. All in all it is a big spacious area with good facilities. We were docking in the old outer port. The old breakwater has been incorporated into the port and here we have ferries and cruise ships docking. There is not a real big terminal for cruise guests but it is adequate for a day call. 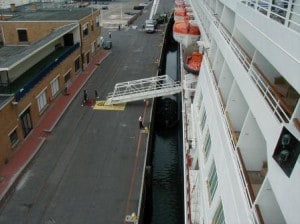 The peculiar thing is that when they made the old breakwater ready for use for berthing ships, they did not straighten the pier out. The old breakwater was curved and now the dock still is. It is really strange to bring a ship alongside there as you do not have any perspective what so ever whether you are alongside or not, or whether the stern will hit the pier or not as the pier curves around. The first time, when I docked there, I really had to get used to this. Now I have found the trick, that works the best and that is simply not look at the dock. To make sure that the ship does not hit the pier because of this curvature, the port supplies two enormous Yokohama fenders. These are wide enough to keep the ship from touching the dock as long as the ship centers itself correctly. So this time, I was ready and just watched these fenders. One under lifeboat 1 and one under lifeboat 9 and we were in business. My chief officer who had not seen this dock now went through the same confusion as I did the first time, will the stern touch or not…….. It did not but it looked like it.

So we docked the ‘curved” way and had a beautiful day in Belgium. The majority of our guests went off to Bruges and quite a few of those who had been there before took the train to Antwerp or Brussels or simply stayed in Zeebrugge for mussels. The latter seems to be very good at the moment and the Belgian cuisine has a name to keep when it comes to cooking mussels. The mussels itself come from Holland but that is a minor detail.

We left by 1600 hrs and I was in a hurry as we have to cross the Bay of Biscay on our way to the next port of call La Coruna in Northern Spain. The weather for the area looks quite good but there is a lot of bad weather above Ireland and near Iceland and that will sent waves all the way down to the French coast. The same sort of waves that made us cancel Foynes in Ireland 14 days ago. Thus I wanted to get out of Zeebrugge at the end of the flood tide and then sail through the English channel on the ebb tide. That way I could maximize my speed with a good push from the ebbing tide, while we were still in the shelter of the English Coast.

Tomorrow, when we clear England and the swell comes in, I can slow down gradually and rides the waves the best way possible. It is going to be windy and wavy tomorrow, but not that bad as we are mostly going with it.