All our guests made it safely onboard during the embarkation day yesterday. This morning they had the option to explore Greenwich and it’s surroundings but the majority stayed onboard. Trying to get over their jet leg I assume as until 11 am it was rather quiet in the ship. I was involved in two meetings which pertained to building a new cruise terminal in Greenwich. A terminal where the ship can dock and the people can walk off the ship and directly onto the shore. If all plans come to fruition the terminal would be ready before the 2012 Olympic Games in London. Greenwich has been working on plans for a cruise terminal for a long time already and they now hope that the stimulus of the Games can get these ideas finalized. Let’s hope it all becomes reality. Greenwich has a lot to offer but the current situation is far from ideal. So I am glad that I was able to help, if only a tiny bit by offering the hospitality of the Prinsendam. 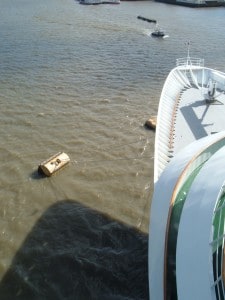 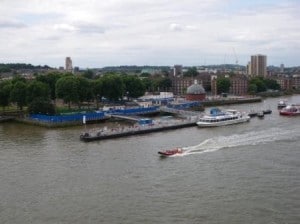 The buoys we docked on and the place we called at. Photo courtesy Captain Albert Port database.

By 14.30 in the afternoon the high tide was approaching and time for us to leave. The welcome barge was cast off and one by one we let go the ropes that were hooked up to the six buoys. Then we travelled 1.5 miles down river; going stern way we swung around in the entrance to the East India docks, the first location where the river is wide enough to accommodate the Prinsendam with its 204 meters in length. Due to the perspective with the high rises on the north bank it looks as if we were ploughing with the stern through the front gardens of some of those apartment buildings. It gave the same sort of feeling that we had a few weeks ago when in Lysefjord Norway. Here we thought that we were almost touching the cliff walls but when we measured the distance on the radar we still had 2000 feet spare. Vertical distances above water make you loose your perspective very quickly.

However we swung around safely and sailed past the Isle of Dogs, through the Thames Barrier and past the Woolwich ferry. This is a major crossing point in London but because it is densely populated on both sides, they have never been able to build a tunnel here, or a bridge. Hence ferries go to and from 24 hrs a day and there is always a line of traffic waiting. Quite close to it is the Royal Arsenal, which once was an important army compound. You could see that part of the area is now handed over for commercial purposes but there is a still an army presence with the royal Artillery Museum. I am not that much into army stuff; my passenger ship hobby keeps me busy enough, but they say the museum is very worthwhile to visit. So I might go there one day during our regular visits to London when my wife wants to see the West End shows.

Shortly after the Thames Barrier, the scenery becomes less interesting and much less pretty. However from an urban-study point of view it is of interest, as this area is very much in transition. A lot of old industries have disappeared and the areas that have become vacant are now used for housing developments. Thus you see high rises next to petrol chemical industry and one set of buildings looks straight across to………… London Hill. That being the garbage dump. Eventually the whole area will be changed into suburbia and the garbage mountain into a sort of park. (I would put a ski slope on it) However at the moment it looks very hodge podge when seen from the river.

We passed our Tilbury terminal again and here we changed our river pilot for a sea pilot. Time to meet an old colleague. The pilot who boarded was ex Holland America and I sailed with him about 12 years ago. He married an English lady and when babies came in the picture he became a Thames estuary Pilot. Nowadays, under the EU rules, there is free exchange of labor, so you will find English pilots in Holland (If they can master the lingo) Greek pilots in Germany and Dutch pilots in England. Further back in the archives you can find a description of a Belgium pilot in Belfast as well. So while racing down the river on the ebbing tide, we had time for a lot of gossip about the good old days.

By 20.30 we were out in open waters and I had missed the first sitting “Welcome onboard champagne toast” The Cruise Director said he muddled through but it was not the same. I will show my face tomorrow evening briefly before the first show starts. It is always nice for the guests to see what the driver looks like.

Tonight we will go with slow speed across the North Sea as the other side is not that far away and then we will be in Zeebrugge for a full day call. The weather is supposed to be gorgeous with sunny skies temperatures in the high 70’s and no wind.