Rather un-expectedly I ended up on the Koningsdam for one cruise. My original schedule called for joining the Nieuw Statendam on October 05 but that was rescheduled to October 26, leaving me with a small gap in the program. Hence the option came up to go for one cruise to the Koningsdam for a project that will also be useful for the Nieuw Statendam when she starts sailing. It all has to do with fine tuning a special safety feature the ships have that were constructed after 2014. More about that during one of the coming days.

The Koningsdam is currently making Mediterranean cruises from Civitavecchia and today it will commence a West Mediterranean cruise with a length of 10 days, sailing from Civitavecchia to Cartagena (Spain), Ceuta, Spanish Morocco, Cadiz, Barcelona, Marseille, Monte Carlo and Livorno. Then the next cruise will go to the East side of Italy to Croatia and Greece. The cruise world is still monitoring the situation with Turkey so for the time being the cruise ships (of all the major company’s) are not doing the longer loop cruises which would include Kusadasi and Istanbul. 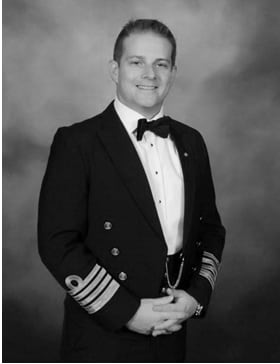 Captain Noel O’Driscoll has been at sea for 24 years of which 19 with Holland America. See his bio on this blog site.

Master of the ms Koningsdam is Capt. Noel O’Driscoll formerly of the ms Veendam who joined this ship in June  after having played with the 3rd oldest ship in the fleet, he is now in charge of the newest ship in the fleet. In the olden days of yore the youngest captain would start on the oldest or smallest ship and then go by seniority to the larger and newer ship once those ahead of him had moved up and the oldest, normally the commodore, retired. Then we had a period when each ship had a senior master and a Jr. Master would fill the gap when the Sr. went on vacation.  When we went to the 3 on 3 off schedule that did not work anymore either as both captains now served equal time and the younger one did not fill in anymore when it was just convenient for the Sr. Captain.

When the 3 on 3 off schedule for all captains (and other Ships staff members) was established, the company went to teams and that made it possible that a very senior captain would sail on an older and smaller ship and a less senior on a newer and larger one. It came down to personal preferences and where the gap was when you started out. Nowadays the whole system fluctuates even more as several captains do stints at our Simulator school in Almere and when they step out, those gaps have to be filled by whoever is available. The company does like to keep captains with their teams on the same ship but you will see more variation in who is on board a ship nowadays than a few years ago. Once the Nieuw Statendam is in operation, there will be a re-alignment again as it means an addition to the fleet with no ship leaving.

The first ship that will leave will be the ms Prinsendam on 1 May 2019 but in the period afterwards there might also be some captains retiring and that will start another musical chair dance. (I cannot say who is going to retire as they might change their mind again……….. sailors love playing with their boats and the thought of having only a rubber duck in the bath tub to play with, does make many change their mind)

Today in port we have the Costa Magica and the Vision of the Seas so at 17.00 hrs. or just thereafter we should have a nice sail away from the port and heading into the Thyrrenian Sea. It is and will continue to be a beautiful day here, mid 70’s and sunny with a gentle sea breeze and that will give a good start to our new cruise. We have quite a few back to back cruise guests on board who are spending 3 weeks on board and then have the chance to see both the east and west Mediterranean during one vacation.

Most of them took the train to Rome or walked into Civitavecchia today to avoid the mayhem of change over day. Tomorrow we are at sea then we will have our first port of call Cartagena Spain, which came to cruise prominence after the year 2000 and although very popular is still a bit off the beaten track. Yes you can buy the T shirt there but you have to look for it.