As the distance between Civitavecchia is not one that requires a top speed, the captain could wait with sailing until all the guests were on board. Guests departing late from Rome, or returning from tours (I just found out we have over 500 back to back guests on board, that is over 20% of all on board) can have delays on the roads out of Rome or from the airport. Looking at the number of small cars parked everywhere in Rome, it seems that public transport is not that popular and all those little cars come racing out of all the small roads of Rome any time after 1600 hrs.; to into the country side and or into the suburbs. And racing the Italians do like. I was picked up yesterday by a private Mini Van from my hotel near the airport and the driver was clearly training for the next Grand Prix. Normally it takes at least 45 minutes on the motor way, or autostrada, to reach the outskirts of Civitavecchia and he did it in 32 minutes. The speedometer seldom went under the 140 (90 miles) kilometers an hour and thus we overtook anything and everything. And that in a country where even the Garbage Vans thunder by with 100+ (62 miles) kilometers an hour on the motor way. I did not mind as I would not have to pay the speeding ticket and there was no opposing traffic as this was a multi lane motorway.

The Koningsdam did not go for 90 miles an hour; we leveled off at 17 knots. That brought us to the Bonifacio Passage or strait between Corse and Sardinia around 10 pm. last night. A pity as it is quite scenic during day time. But with autumn in full swing it was dark by this time and the sides of the strait are only sparsely populated so it is not as if you are sailing into New York or through Istanbul. We go through the strait as it saves more than 4 hours sailing at full speed, compared to going around the south side of Sardinia. The strait is 11 kilometers wide or six nautical miles and the fairway is not straight but has a bend in the middle which can be a challenge during bad weather; or with a lot of shipping and or fishing boats in it. Nowadays with the modern navigation equipment it is not such a challenge anymore but in the old days most ships did avoid the strait, especially if the Captain did not have any local knowledge. There is current, and it can blow very hard through the hole, shoals are not always clearly marked if you stray a just little bit off course and on the west side near the town of Bonifacio there are ferries crossing and they take the “right of way” even when they do not have “the right of way”. The latter is mainly caused by the fact that they consider a “big passing distance” what we consider a “near miss”. There is pilotage available for the Strait but it is only compulsory for tankers and strongly recommended for ships not as well equipped and maneuverable as the cruise ships are.

The Strait of Bonifacio. Named after the town at the Western Entrance.

Once through the strait you leave the Tyrrhenian Sea behind and you are sailing in the West Mediterranean Sea, which showed us this morning that autumn has arrived in the Med. The weather is changing over from Sun & Wind, to Wind & Thunder storms, but there is still a lot of sun once the thundering is finished. Early this morning we passed through a band of rain and the electric show was quite impressive. And that weather we kept most of the day while sailing under the Balearic Islands of Mallorca, Menorca and Ibiza. Ports we also regularly call at but not during this cruise. 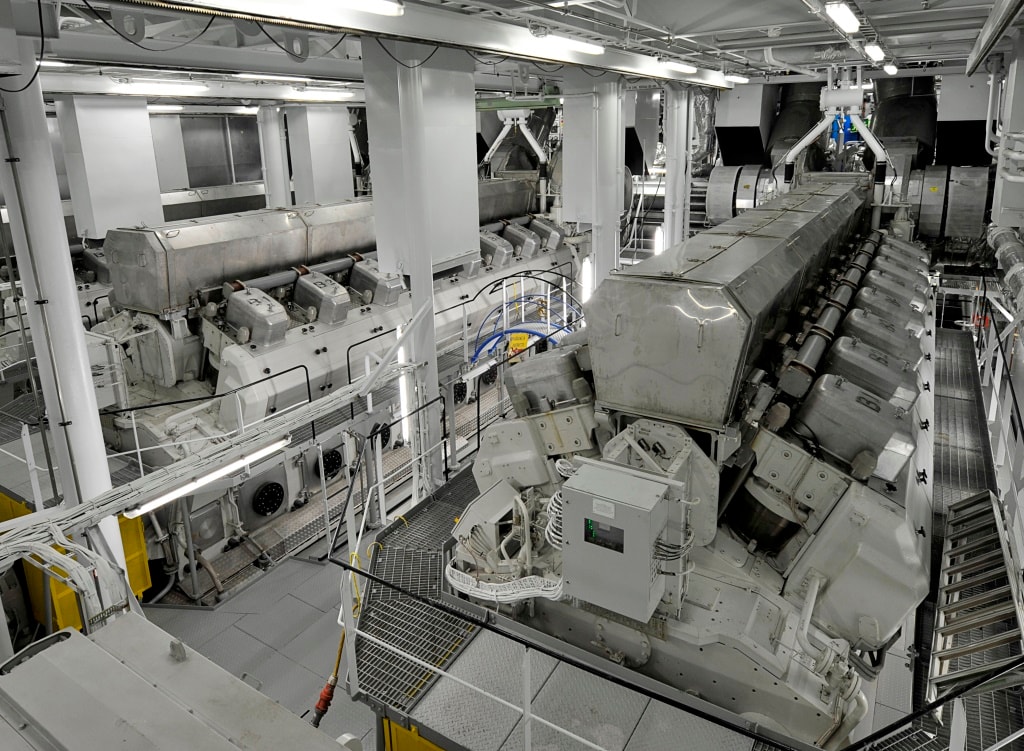 The top of one of the four MaK engines that provide all the power for the ship. The ship can make just over 17 knots on two engines and over 22 knots on four engines.

Tonight the captain will put three engines on line, so we will go a bit faster and then we will arrive nicely on time in Cartagena. The ms Koningsdam has four main engines connected to generators which provide all the power for the ship. So what is normal in the cruise industry, is that you run an average maximum speed which is a little bit too high and then you “drop an engine” when that average speed to maintain is the same as what one engine less can deliver. Or you start with just sailing on the edge of the correct speed and you switch another engine on “to make up” if you are just not going fast enough. That was decided this time as on departure Civitavecchia it was not known how much time the ship would lose while going through Strait Bonifacio and how much favorable current the ship would get once sailing under the Balearic Islands. Thus tonight we go to three engines unless Mother Nature gives us an extra free push in the right way tonight.

This evening we will sail under the coast of Spain until we come to the deep bay of Cartagena after sunrise. If there is no delaying traffic we should be docked fairly quickly as the distance between the pilot station and the cruise ship dock is not much more than 2 miles.

Weather for tomorrow should be good. The band of rain we have seen today will be completely gone by the time we get to the port and the weather gurus are expecting a dry and sunny day with very little wind. Temperatures around 76oF or 24oC. Nice weather for sightseeing or sitting on a terrace to see the world go by.