Today we are sailing in the Gulf of Alaska which is behaving itself very nicely. There was on and off fog during most of the night and that might not have been very nice for the balcony cabins as the fog horn was blaring its repetitive message every two minutes. The Collision Regulations say that the whistle shall be blown at least every 120 seconds when sailing at sea. And I always find it amazing that on every ship I sail on it is set on exactly 120 seconds of the maximum limit of 2 minutes. That is simply a sort of default setting as nobody wants to hear more noise than necessary. If ever in the future the 120 seconds would be increased to 150 seconds or reduced to 100 seconds then that would very quickly become the standard setting for all the ships. The law gives 120 seconds as a maximum so shorter intervals can be chosen. I have that seen happening and have done it myself as well. Especially on rivers and when near ports with a lot of Sunday sailors around. Los Angeles / San Pedro is one of those areas. There is a very complicated Vessel Traffic Separation Scheme regulating the flow from the North, the South and from San Pedro and Long Beach harbors; and in the weekends it is full of boats who do not have a clue about those arrangements and happily sail towards every sound they hear. And we cannot see in the fog what a big ship is or a small boat is as radar reflectors just give an average echo and the absence of an AIS signal does not mean it is a small boat. Luckily here in the Gulf it is a lot quieter. Apart from an occasional fisherman or a tug and tow there is no traffic. But still we blow the horn as you never know.

Sailing across the Gulf of Alaska is basically straight once you have excited Resurrection Bay at which end Seward is located. Then there is only one course change (to avoid an underwater bump) and that course change brings you to Cape Spencer where the Alaskan Inside Passage Starts. There we pick up the Alaska Pilots and then sail up to Glacier Bay. The only real problem the Gulf brings is in the autumn when the October Storms start blowing. And as Mother Nature does not care very much about the way we name the months of the year, the October Storms are sometimes already there in September. That does not make the Gulf out of bounds; we just have to go a little bit slower to ride the waves more comfortable. That has been put in the cruise schedule and thus we sail today with a sedate speed of 12 knots to maintain that schedule. Now with beautiful weather we could go a lot faster but Glacier Bay by night is not really that exciting. But we do need that spare time in autumn as then 12 knots is about the maximum we can do. Anything more and the ship becomes a roller coaster and that is not good for our customer service. 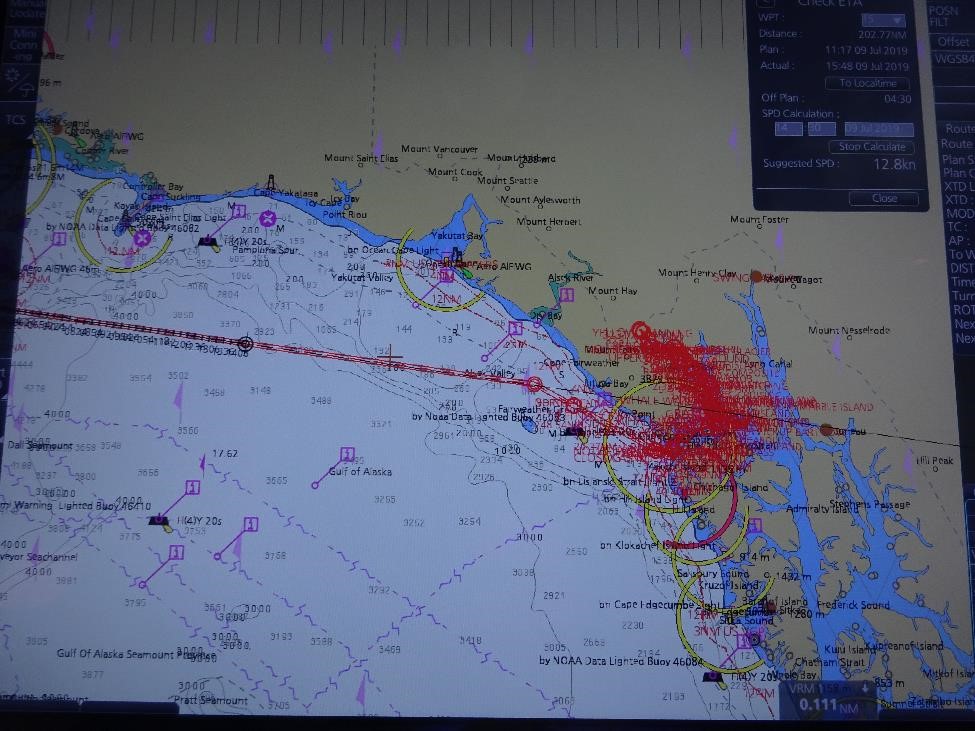 The electronic chart. The red mass to the right are all the course change points  when going into Glacier Bay and due to the scale they are very close together. The magenta flags in the sea indicates that there is some additional  navigational information available for that location.

Although we are in open waters it is requirement that we sail with the watertight doors closed while we are in areas of reduced visibility. That precaution is in the Holland America Line rules as you never know if a ship might be in the fog and is not picked up on the Radar. So for the service areas on B, C and D deck, the doors are opened and closed by staff when they have to go through. That is a bit of a nuisance but safety comes first. To ensure that any staff does it properly, e.g. opening and closing a watertight door) they receive training. Watertight doors are lethal as they are normally on a self-closing setting and still crew die on ships because they do not follow the correct procedures. Thus crew who have to open these doors receive training with an exam and then their Crew ID card is annotated so everybody can see that the person concerned is a certificated WTD operator. Because this is so important we have a dedicated monitor on the bridge with the Water Tight Door layout of the ship which gives the real time situation. 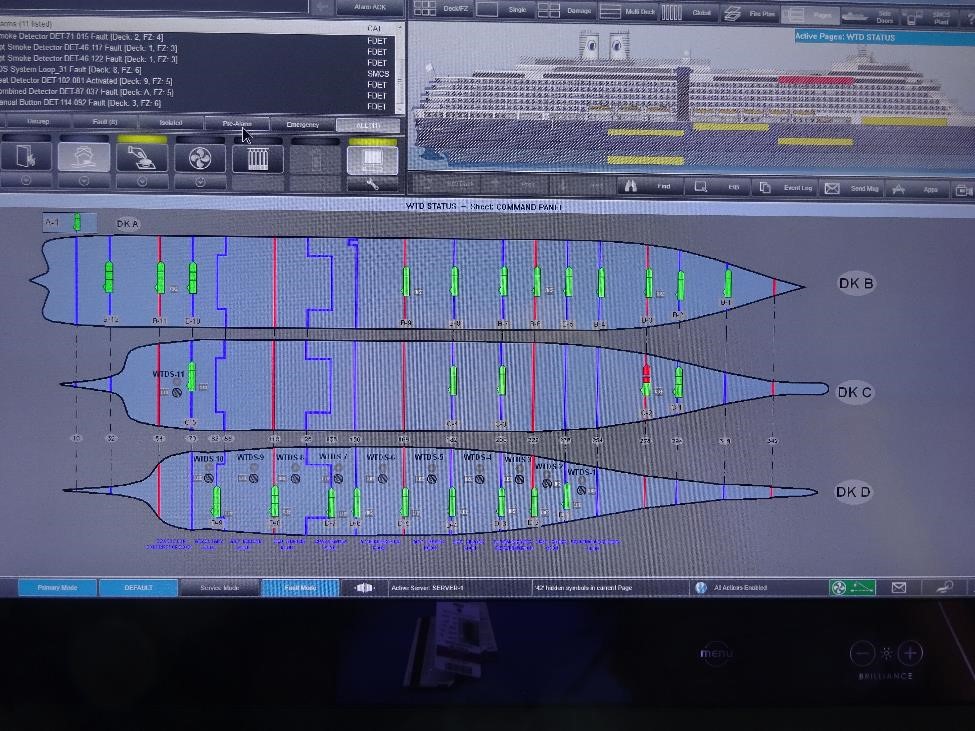 The Water Tight Door bridge monitor.  B deck is the first deck under the water line. Here live some of the crew. As each section (watertight compartment) between two doors always has a vertical staircase, there is no need to open doors here.  C deck forward is where the ships laundry is located and you can see one door (half red) being opened for laundry to be transported from the washing  and drying area to the clean linen rooms. D deck is where the main engine room is located which runs the whole length of the ship  and as all doors are green, there is no engineer moving through.

This is monitored during the watches on the bridge. To ensure that can safely happen the bridge at sea is constantly manned by two navigators and two AB Helmsman. One Navigator has “the conn” which means that he/she is actively navigating the ship, the other one is the assisting navigator who takes care of the telephone calls, monitoring of systems but also monitoring the lead navigator. The two navigators can switch position so they both stay fresh and alert but the senior navigator is always in charge of the watch and has the final responsibility.

For tomorrow in Glacier Bay we are looking at a nice day, partly cloudy with temperatures around 7oC / 50oF in the upper bay and with little wind and that makes for a nice viewing day. I prefer a completely overcast day as it is better for the taking photos. No glare but the sun on the snow and ice makes it look prettier.