And thus I arrived on my next ship the ms Westerdam. After a quick visit to Seattle Office, where I got equipped with a new cell phone (I am now entering the “Apple” phase of my life), a new laptop and a new ID card.  As it was right around the 4th. of July, it also gave me the chance to see the Seattle Fireworks around Lake Union. Very nice; but I always have a challenge to bring up much enthusiasm for fireworks as I have seen them in Sydney Australia, and what else can you then ask for. Still Seattle is famous for its local craft beer so I had nothing to complain about. The only way to reach a ship in Seward is to fly to Anchorage and from there take a 2 hr. shuttle/taxi drive to the port. There is also a small plane service but you never know if it can fly or not so the agents bundle arriving people in taxis. I was quite happy with that, as I got worried about the plane option as there are forest fires raging at the moment and most of the time.  And indeed most of the time we drove through mountains ridges enveloped in a brown haze. Where there was no haze, the scenery was impressive as usual. Once approaching Seward port it was dense fog (less than 1000 feet visibility) and again I severely doubted if the local plane option would have been feasible. 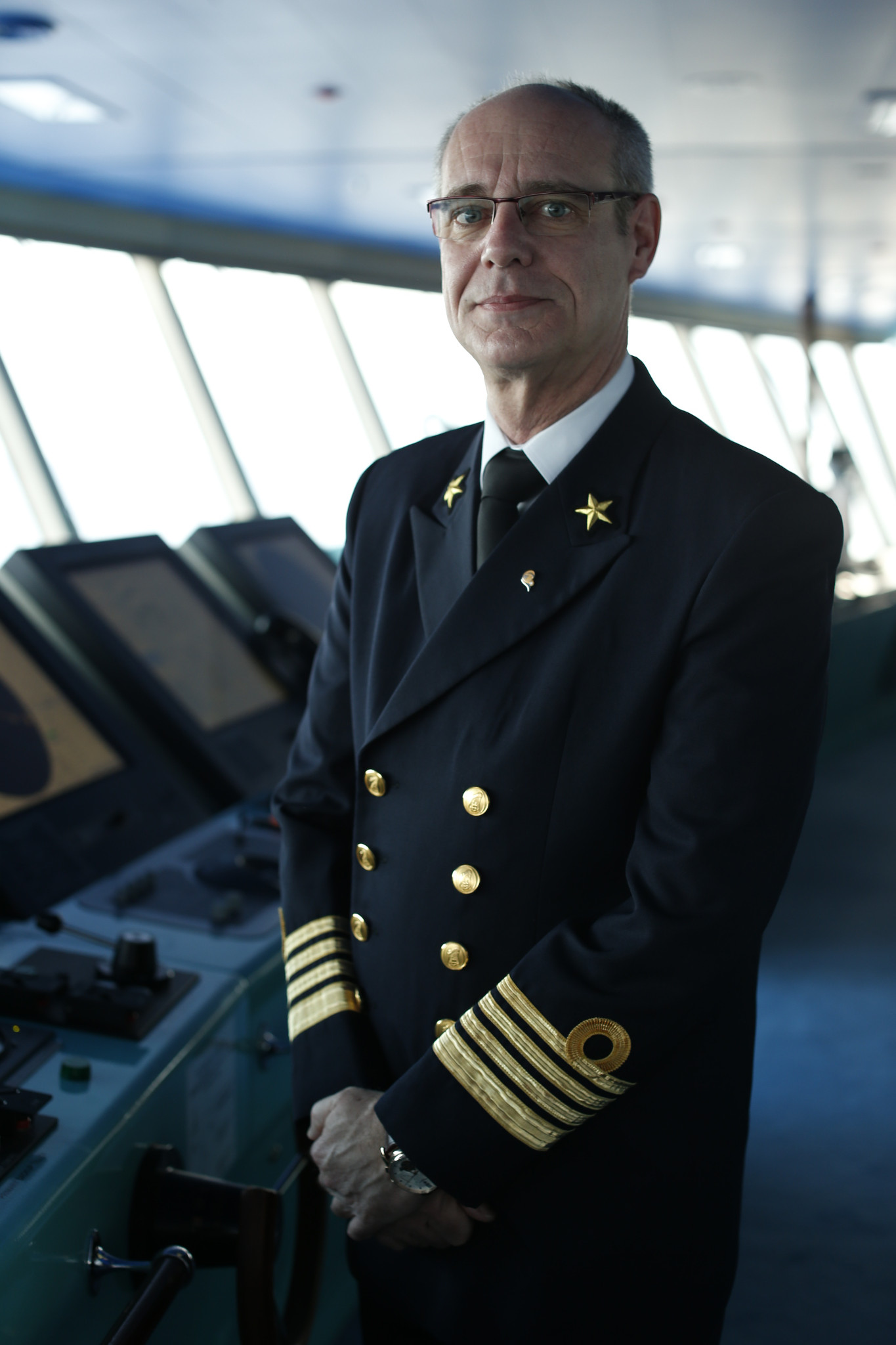 I will remain on the ms Westerdam for a regular visit, which means three weeks, and during that time I will offer the Captain my regular support program do so whatever he thinks is necessary for the ship. Master of the Vessel is Capt. Vincent Smit, one of the two Smit’s we have in the company as captains. He joined the company in 1992 and has thus been with us for 27 years. The other is Capt. Ane Smit of the Zaandam see my blog from several weeks ago.

The Westerdam is making 14 day cruises from Vancouver to Seward and back. You can take the 7 day and then go overland or go home from Seward / Anchorage or do the 14 days by sailing back down again. Her sister ship the Noordam is doing the opposite, so every Sunday there is a departure from Vancouver and from Seward. Both ships follow the regular schedule: Vancouver, Ketchikan, Juneau, Skagway, Glacier Bay, and Seward and on return Glacier Bay, Haines, Juneau, Ketchikan, and Vancouver. Holland America has been the pioneer with sailings to Seward starting in the 1990’s with the Rotterdam V. As usual if one is successful other company’s follow and thus we saw Princess and Celebrity showing up as well in later years. Princess used to call at Whittier which is just around the corner but that is a much more wind exposed port and it is easy to understand where the Captain’s preference lays.  A nice thing about Seward is, that there is only room for two ships and thus it is never overcrowded. Not for those going into the interior, nor for those who do the up and down and wander into Seward itself. 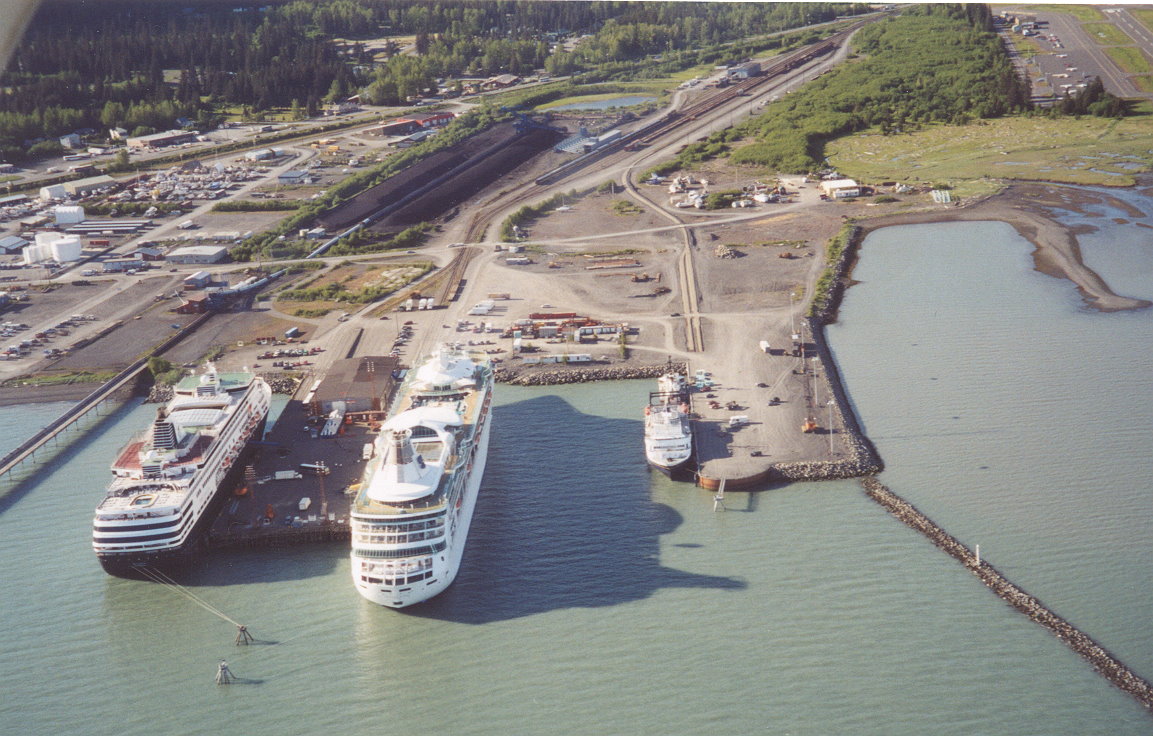 This is an old air photo from Seward dock. But not much has changed apart from the ships. Dock 2 is the smaller dock which is used for barges bringing and taking containers. The rail road dock to the left is used for the cruise ships. It is called the rail road dock as in the old days the trains came unto the dock. Now the platforms are across the street.

Seward can be overcrowded but that is caused by the large number of campers / RV’s that descend on the town in the summer. Some for the scenery but most of them for the fishing and a lot of them bring their own boat, hooked up behind the camper. For some of them it might be a relaxing way to pass the time but for some it is far beyond that and they show up with equipment that runs in the thousands of dollars. Once a year there is the Silver Derby for the salmon catching and then there is an in-crowd which shows up year after year and often also produce the winners, year after year. While driving down to Seward this morning, I saw quite a few of them heading back to anchorage as they had spent the days around the 4th, of July in Seward.

What is completely different to other change over ports during a cruise, is the disembarkation and embarkation system. While in other ports everybody disembarks between 0700 and 09.30 /10.00, here in Seward is lasts well into the afternoon.  Guests travel with the train or with buses up to Anchorage and/or directly into the interior and they only leave the ship when their “tour” is scheduled to go. The buses and the train that are destined for Anchorage, then returns with new guests. Thus today we had guests leaving at 12.30 and new guests were already joining at 11.30.  This asks for a bit of creativity from the Cabin stewards who have to work around the various departure times but in general it works out well as the “early joiners” often are assigned the cabins of “early leavers” in the cycle and thus there is no waiting time.

Tomorrow we will be at sea, sailing through the Gulf of Alaska and the then next day it is Glacier Bay day. Weather is looking good and there is a high pressure system laying over the South of Alaska and that gives calm waters. But there is also a heat wave (3 days ago they had record temperatures of well into the 90’s) and that means a heightened chance of zero visibility in the open waters. The Captain will be busy with pulling the Fog whistle again.