It is only an odd 90 miles from Cartagena to Malaga and we followed the Spanish coast line travelling westbound while doing so. Hugging the 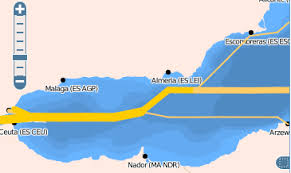 Traffic flows in the Wed Med. Although this area has its own name and is called the Alboran Sea.

coast does not really work here as the Spanish have created a Vessel Traffic Separation Scheme more than 12 miles out of the coast at Cape or Cabo de Gata. Here the shipping route make a 45o turn and in the past ships cut the corner as much as they could with the danger of collisions, followed by groundings or oil spills or both. So all shipping that is not approaching a port nearby, has to sail out into deep water and follow the Traffic Scheme. And has to report in to Gaita traffic to advise what they are doing and why. It saves accidents, it saves pollution and thus I am all for it. As a result ships are following established routes that keep them away from the main land.   And then by 0600 this morning, the Koningsdam made a 90o turn to the North and sailed into Malaga. The port is a sort of inner bay, most of it man made and of a North – South aspect. Hence the 90o turn.

It was a nearly full house with four cruise ships in. The Horizon of Pullmantur was already inside as she was doing an overnight, then us, followed by the Costa Favolosa and the Explorer of the Seas. So a good 9000 guests going into town or on the excursions. Luckily Malaga and the hinterland is so large that it can easily absorb the 9000 without having crowd issues. The only congestion I observed was with the Big Red Bus. That tour company lays extra buses on to cope with the extra tourist influx but it is hard to cope with the traffic if the major wave of eager explorers comes off,  in one go, around 0900 when breakfast is finished. It looks like Costa and RCI have the same breakfast times as we have as the wave came out of the three ships at the same time. The Costa Favolosa produced another wave and one of bikers. From the lower gangway several groups of 50 bikers were let loose to go bicycling in the Malaga area. Good area to do so as the coastal area is almost flat. I wonder how security is going to feel when they all come back and all the metal detectors are set off by the bikes. 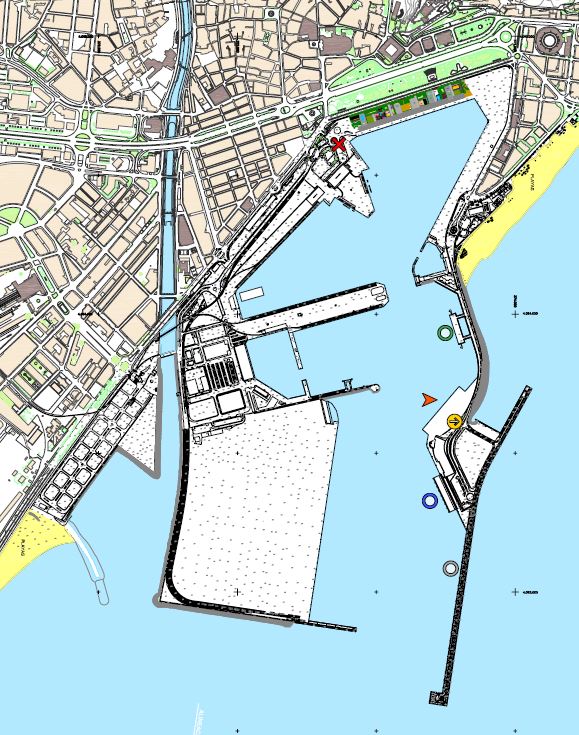 The port of Malaga.  The green rondel is the Horizon, the red arrows are we, blue the Costa Favolosa and black is the Exlporer of the Seas. The captain had docked the Koningsdam nose out so the forward gangway was as close as possible to the terminal entrance. Saved a 1000 feet of extra walking. (Diagram courtesy of the Malaga Port authorities)

I never had a bicycle – bike cruise charter or part charter on board; but did have once a motor bike group of board of 42. The big boys with Harleys and the touring versions of the BMW and other brands that produce bikes that were are not for racing but for easy riding activities. They had all their bikes parked in the marshaling area in the ship, (where we load stores and luggage) and then we would rig a gangway there so they could drive out. The only challenge was that we cannot allow fuel to remain in the tanks overnight. So each evening the tanks had to be drained, the fuel stored on the aft mooring deck and then put back on arrival at the next port of call. A few bikes had been designed in such a way that the tanks could easy be removed from the bike but with other bikes the tanks were too much integrated so it was a cumbersome process. Still it was quite impressive to see bike after bike racing out of the side door and into the terminal area. Officially they were only allowed to start their bikes outside the ship but most bikers suddenly did not speak English anymore when that topic was discussed.

We are in Malaga, except for Malaga itself, also for the tours into the interior with the Alhambra in Seville being the most important attraction. That is a full day tour and has a tendency to delay the departure of the ship due to the congestion of the roads. At least when you have a departure time of 1700 hrs. And today the captain really does not want to stay longer as it is an 18 knots average speed cruise to Funchal in Madeira. And for the next 12 hours or so the wind will not be our friend. Although we had a beautiful sunny day here today, in the late morning it really started to breeze up from the North West. Courtesy of that weather disturbance that is coming towards the Gulf of Biscay. Once we are outside, out of the lee of the Spanish Main, that wind will be quite strong and the ship will have to push against it. 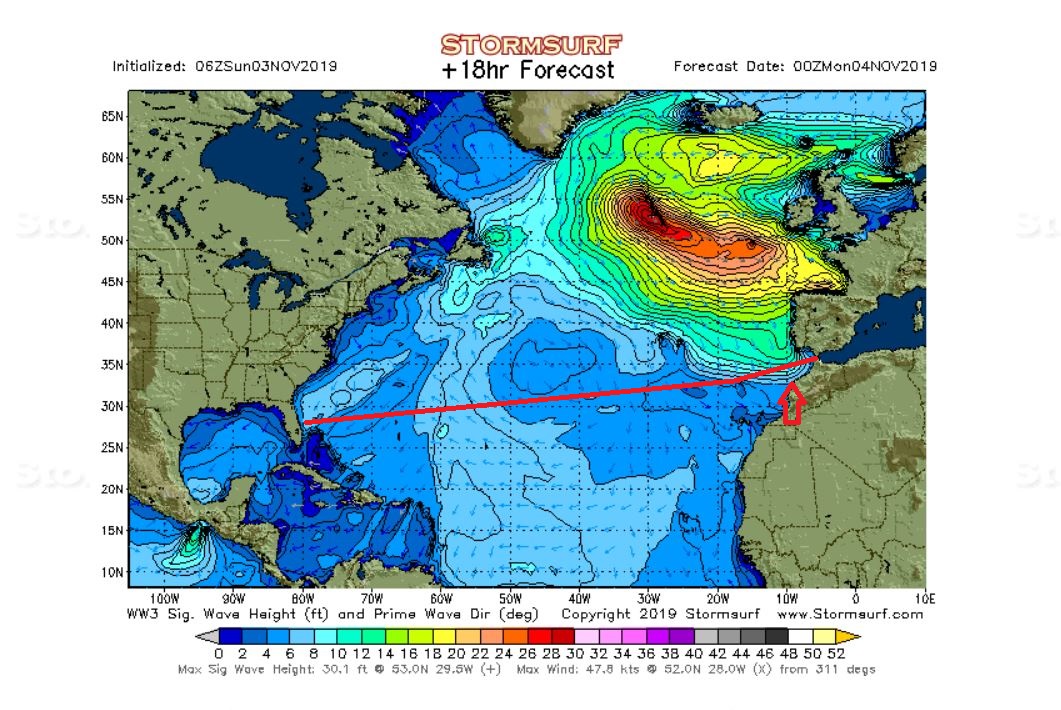 The wave chart for tonight. As you can see our red course line s just skirting the 10 to 14 wave boundaries so  we will find out what we get there, when we get there,

By 8 pm. or so we will pass the Rock of Gibraltar. And although it will be dark, the rock is normally quite well visible as the base is lit and it has multiple red lights on the top to prevent airplanes from bumping into it. From the Rock it is then another hour before we will feel the motion of the Ocean.  The captain has hatched the plan to race full speed, about 21 knots, out of the Straits of Gibraltar. First of all as we have to maintain an average speed of 18 knots anyway, but secondly if we do this then we might just run ahead of the wave field that is pushed down by the storm that is heading into the Gulf of Biscay. (I do not know if there are currently any cruise ships in Bordeaux, Santander or A Coruna, but if so, they might be there for a while or have an extremely bumpy ride getting out)

The in the afternoon of tomorrow the winds should abate but what the swell will do will be anybody’s guess as we are sailing right on the edge of 10 to 14 feet wave height. Around the 10 feet and we should be as steady as a rock, going over the 14 feet and that “steady as a rock” might start to crumble at little bit. 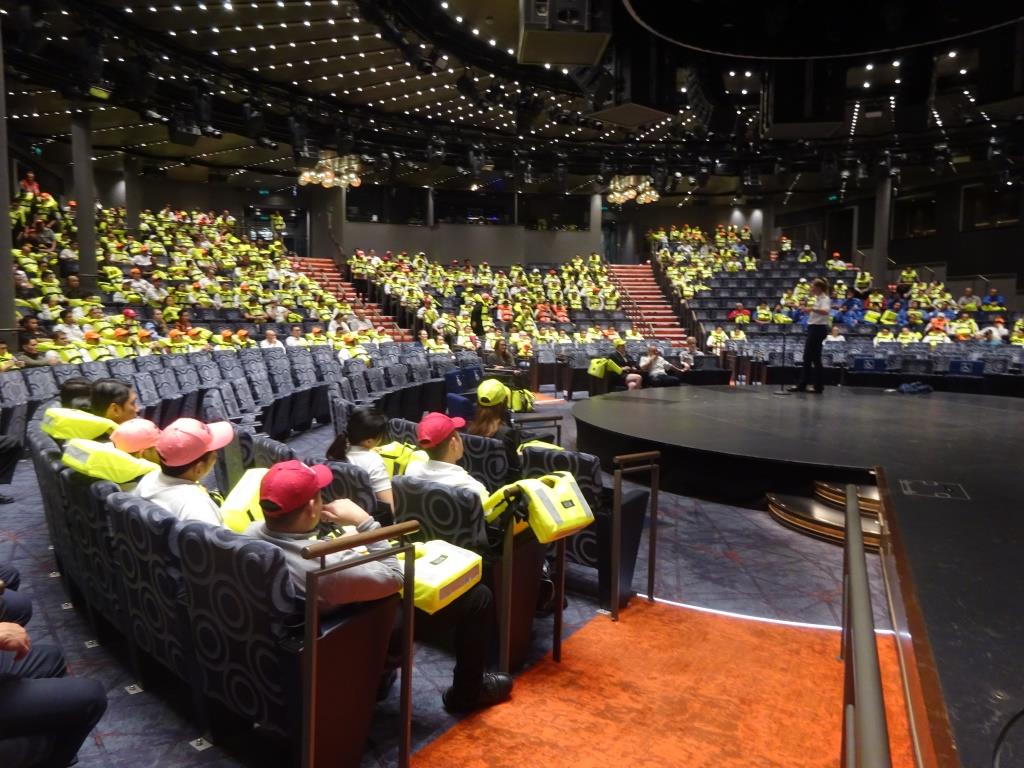 From yesterdays drill. We have on the ship this beautiful “Main Stage” show lounge which sits 800 guests. So it can also seat 800 crew. And our training officer, 2nd Officer Jessica  (on stage) was quick to take advantage of that option and got them all in for a safety training.