While here at home, I am busy with creating a number of training modules that will eventually be presented on the fleet to support the Master in his work. One of those modules is dealing with Flag State legislation. This legislation ensures that only qualified seafarers are working on board the ship. The legislative world in which ships are operating can be a complete nightmare as is usual in the shipping business, the Master is directly responsible for everything. That does not mean that he is not supported and protected by the head office. Far from that, but, in the same way as in European football or soccer, the keeper gets the ball first shot at him and behind him is a safety net.

So let me take you through the maze of rules and regulations that are out there. In a larger frame work the ships operate under “four pillars of wisdom”: 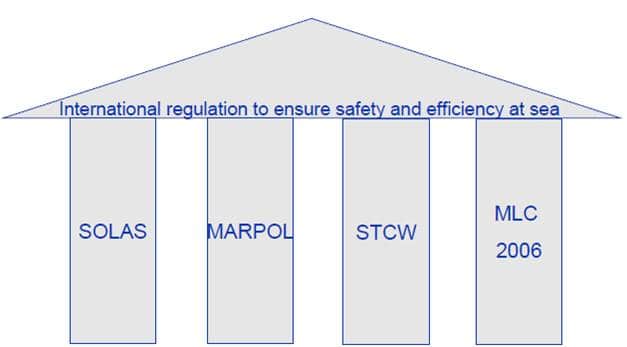 Now the Challenge starts. These international laws which are implemented by the I.M.O  (International Maritime Organization) have to be incorporated in the National Laws of each country that has a Merchant Navy Fleet. That is nearly every country in the world, including Switzerland which has no seaports at all.   As soon as sufficient countries have ratified the convention, it becomes the law worldwide; even for countries that have not ratified it yet or do not want to. The only thing these countries can do is exempt their domestic/coastal fleet. That ratification might take a while as each convention has to be incorporated into the National Law of each country. If one sees the antic of politicians on the TV, you will understand that it might take a long long time.

There is a little clause in each convention which says that nothing will stop the local Administration, which is the individual country, from implementing it in their own way. For the Master who thinks that he can now get around the world, sitting on his four pillars of wisdom, there is bad news.

Basically dealing with this issue, falls into two categories.  Flag State and Port State.  Flag State is the country who’s Flag the ship flies at the fantail. In our case the Dutch Flag, or officially the flag of the Kingdom of the Netherlands.  Then there is Port State. That is the country that the ship visits. And although countries like Canada and the USA are closely aligned neighbors they still vary greatly in their approach in dealing with Shipping Legislation.  Let alone the rest of the world.

Then there is a 3rd factor that has an influence and that is the legislation of the country in which the company is located. As Carnival Corporation is an US based company, Holland America as a full subsidiary has to deal with a lot of American Corporate and other legal legislation that has its influence on the ships as well.

The Captain first has to comply with the Flag State legislation, which issues the passport of the ship so it can sail; then he has to make sure that when he visits a port, the authorities are happy there, and on top of that he has to ensure that whatever is going on, it does not upset American Legislation either. The company in Seattle is deeply involved with this of course and enshrines everything in policies to ensure that it all interlinks and does not cause issues. All the guidelines needed are incorporated in policies which are documented in books that we call Marine Regulations which form part of the company’s Safety Management System.

But that is such a lot of material, that it is quite easy for a captain not being able to see the forest for the trees anymore. And of course……………..it keeps changing.

Thus it is an item that I am working on for the coming period. More to follow…………….