And thus I transferred ships yesterday; walking across the street from Pier 26 to Pier 21 and after safely negotiating around a speeding Park and Ride shuttle, I made it on board the ms Veendam. The Veendam is of course one of my old ships and has not changed very much inside since 2006 as it is too small to really incorporate the Music Walk in all its options.  That does not make the ship less popular it just means that the focus is much more on the destination than being a destination in itself. But the latter still appeals to guests as well as the Veendam had in the recent past a few guests who remained on board for nearly a year, making the Veendam their permanent home.  It can be a lot cheaper than a retirement home, but you need to have good insurance as we are not a retirement home, so there has to be a plan B for the case of. 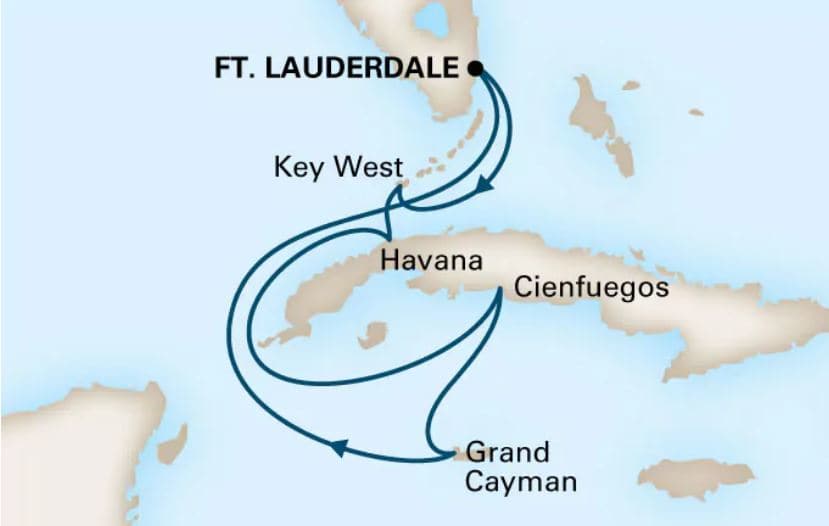 Our 7 day cruise with focus on Cuba.

The Veendam is the ship that has been assigned to open up Cuba for the company and the ship has made a few calls there already. On some cruises it is just Havana but this cruise we are doing two ports, Havana where we stay until 2 am. the next morning and Cienfuegos, located on the south side of the island, where we anchor inside a large bay. Both ports are new to me and even after 39 years at sea I have still something to be excited about.

However we are calling at Key West first and that is today. We sailed shortly after 1700 hrs. and followed the coastline of Florida all the way along the keys. It has been a while since I saw the sun setting over Miami but last evening the skies were so clear that the guests had ample opportunity to take a photo of Skyscrapers bathing in the golden rays of a sun not obscured by clouds. Shortly after Miami the Florida Keys start and then it is hard to see very much. Plus we have to stay a considerable distance away from from them as most of the area is protected by a Conservation Order to ensure the fragile eco systems are not endangered.  The ship tries to stay as close as possible to the border line of these areas to avoid the edge of the Gulf Stream. We would not affect the areas anyway as we keep all over boards inside except water called permeate, from the filter plant we have on board. There grey and black water is cleaned back to potable water, although the health laws prohibit us from using it as such. Therefore we call it technical water and use it for cleaning the ship when needed. But at sea we make too much with all the guests on board and thus we are allowed to discharge this extra clean water anywhere 24 /7. 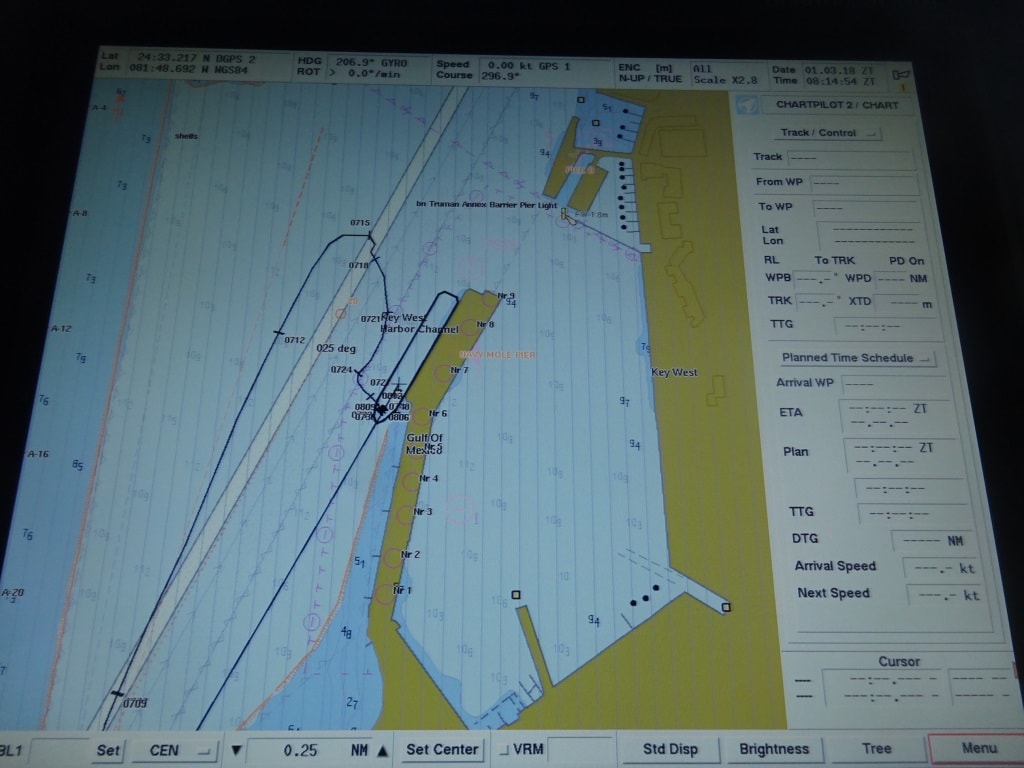 Our dock is really the breakwater/ outer pier of the Navy dock. By modifying the top end, it can now be used for large ships. The track shows that we swung on arrival at 07.15 hrs. and we did so as it was flooding and that way we could keep the flood on our starboard side and help us push towards the dock.

Key West has three piers, Mallory in downtown at Mallory square, the B pier opposite the White Hotel and the Navy Pier outside dock which is now permanently available to cruise ships as the Navy scaled down their operations here a number of years ago. We were the only ship in today but had to dock at the Navy pier which is the furthest out and it is even a long way to the gate. To alleviate that problem they run these little tsjook-tsjook trains to and from the ship. Why can we not dock in downtown?, because we are leaving too close to sun-set. Watching sunset from Mallory square, surrounded by buskers and all sorts of other artists, is a time honored tradition and the locals and non –locals ferociously protect that right. With three ships in you can get a number of exemptions, so you can stay past dark but they are not easy to obtain and the complaints are loud and clear when one is given. So we happily docked at the Navy pier and the small trains shuttled everybody out of the port.

Havana is located just at the other side of the Straits of Florida and when we sail out, we have to kill some time by going slow in the Gulf Stream. That will bring us to Havana pilot station by 06.15 and then we should be docked by 07.00 hrs.

Weather for tomorrow: 30oC / 86oF and very little wind. It will be a warm day.