It is only short hop from sea buoy to sea buoy and thus the Veendam drifted around a little bit during the night and then made with great precision the exact pilot time of 06.15 in the morning. Getting into to port is a very short run, you hardly have time to speed up and then you have to put the brakes on again to make the turn to the cruise terminal on the western side of the harbor. The terminal is an original from the 1950’s and probably from even earlier, when the ships were not so large as nowadays and a regular size ocean liner would be about half the size of the Veendam. 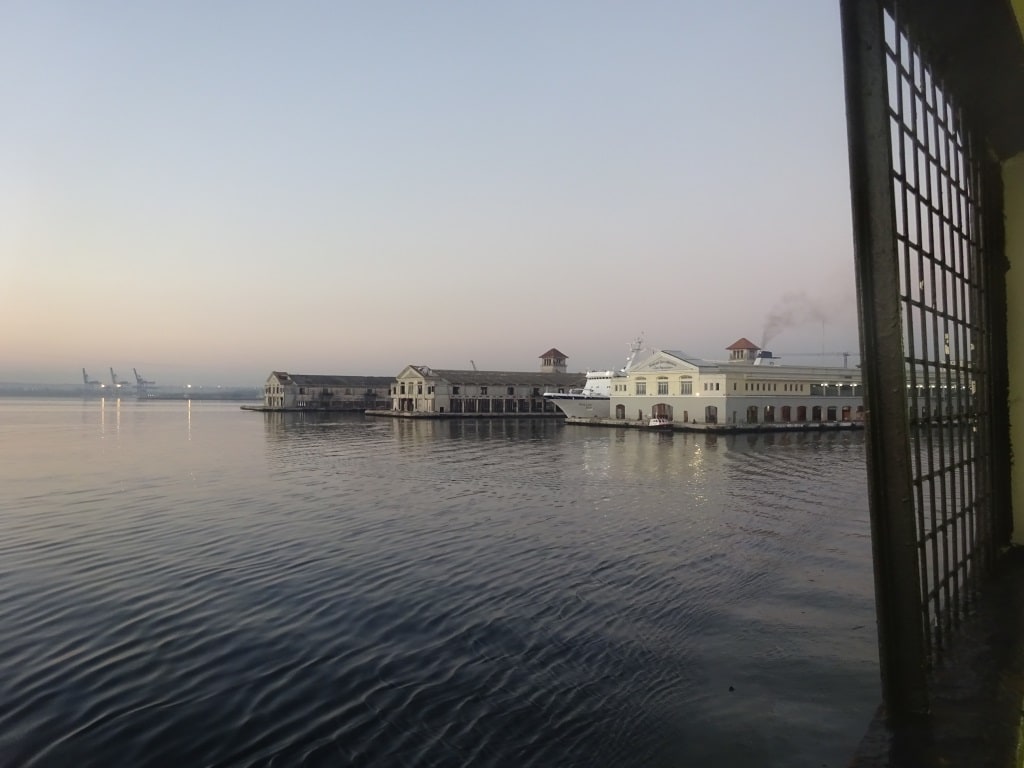 Three terminals from the old days. The first one has been spruced up and listens to the beautiful name of Terminal Sierra Maestra San Franciso. (Sounds a lot better than Terminal B……) the 2nd cruise ship was the Berlin, sailing for the German market. she is a lot smaller and just fitted inside.

Thus we stuck out by about 30 meters, leaving the stern overhanging considerably and all the stern lines were running as spring lines thus leading forward. If we had had a strong North Easterly wind today we would have needed a tugboat to have kept the stern against the dock. The only other option would have been to have dropped the hook in the large inner harbor and have run a tender service or dock somewhere at a larger cargo terminal.  Tendering would not have been much fun as the water in the harbor has a very special fragrance and it is not one that you buy in little bottles. 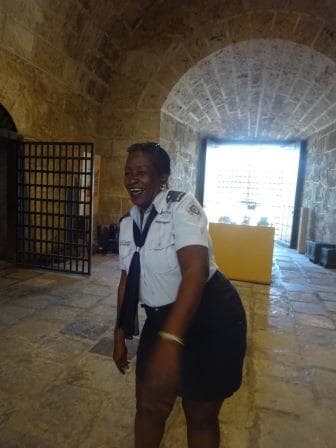 A friendly guard in the maritime musem. She had family in Zeeland, the Netherlands and set me on course for the National Archives.

The ship is still gearing up for all my activities that I want to conduct here on board and while waiting for that I had time to run ashore. I had never been to Cuba nor has anybody else who has sailed for a long time with Holland America. From the good old days the port has three passenger terminals left over, two are in very bad state but the 3rd one has been nicely restored into a regular cruise terminal complete with an embarkation terminal, Money exchange and souvenir shops. Wages are not that high in Cuba so no lack of man & woman power and I have never seen so many Customs people in place, doing both the passport checks and the security scanning. Funny thing is, they scan you going out and going in, so you can not take anything dangerous ashore but you also cannot to take it back. And after having walked through the sealed off Customs area, the ship scans everybody one more time. I have seldom felt so safe in my life. It almost looked like Charles de Gaulle Airport in Paris.

Downtown is not far, as a matter of fact the nose of the ship is in down town. It just depends which way you want to go. The whole old city is right in front of the terminal but the main museum area is a little bit to the west, closer to the sea and that was also my first focus point. I was heading for the Maritime Museum housed in a fort/ castle and called Castillo de la Real Fuerza. It was originally built to protect the harbor but then they realized that is was too far inland, so they had to build another one and made this one the Governors Mainson. (In the days that Cuba was Spanish.) 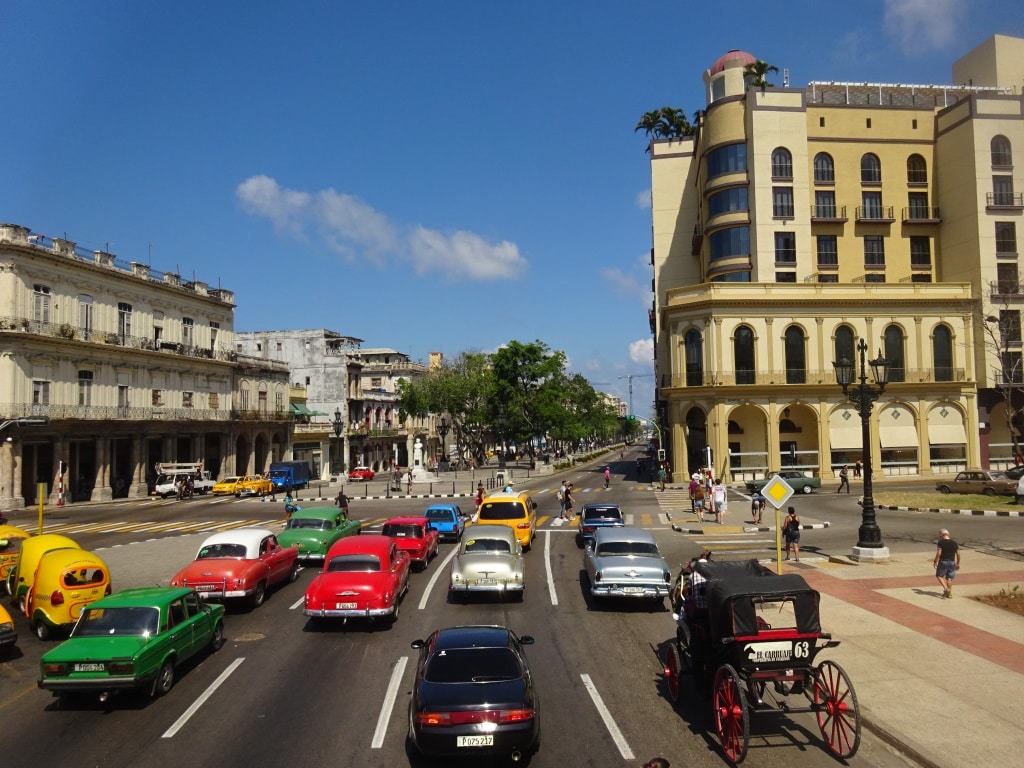 Three forms of transport in Havana. Those yellow eggs to the left are scooters which can take two passengers all over town. In the center the old American cars and a green Lada and to the far right, Horse and Cart sightseeing tours.

I wanted to find out if the museum had anything about Holland America but the collection is mainly focused on the days of the Gold and silver export from South America. A very nice lady told me that all the paperwork was most likely held at the National Library, just around the corner, so that was the next stop.  This was bit more complicated as what I wanted was a bit out of the routine of the Security (All ladies, in both Musea) but eventually a young lady on high heels introduced herself as the Curator of the uncatalogued collections and explained that she thought there were photos from the port from before (before meaning here before the revolution) but she had no idea what and she could not get at it. What a pity, I wished that all museum curators looked like her; then the reading rooms would be a lot fuller than they are now.

It gave me a good feeling, this natural way of trying to help. So I like the people here, friendly and warm; and Ladies if you go ashore here, keep your husbands on a short leash as the ladies are beautiful, there are lots of them, the dresses or jeans are very tight and it all jiggles in the right places. Even in the museums. Luckily I am happily married. 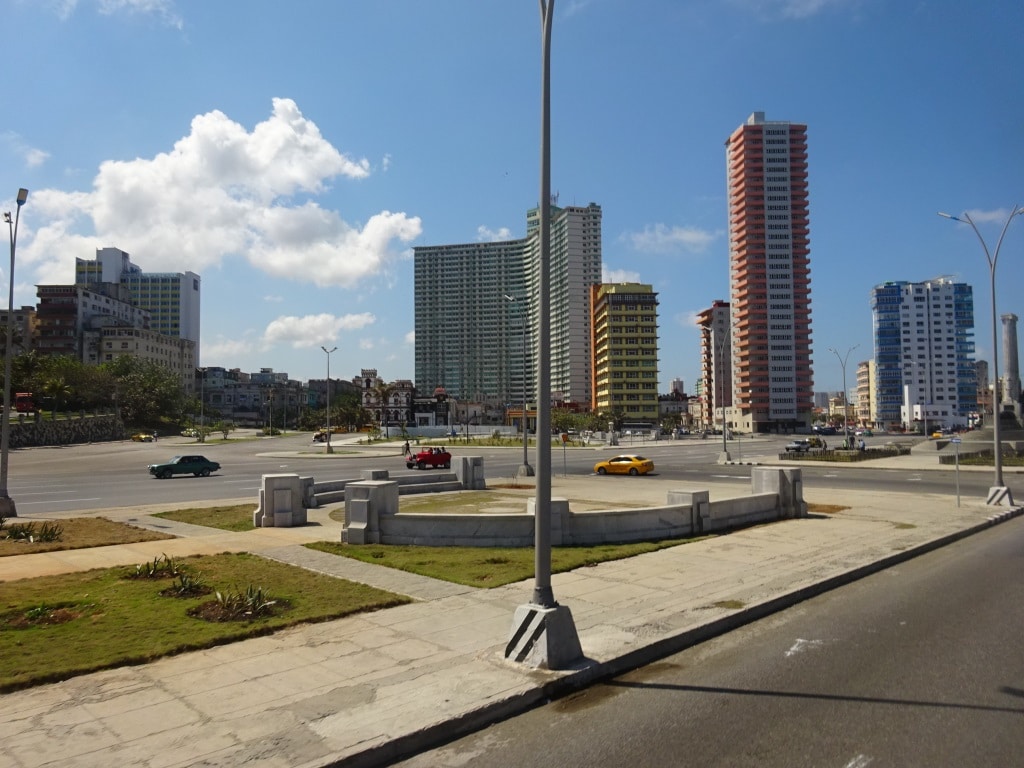 Modern Havana. High rises just off the coast line. The area with the tourists hotels starts right behind it.

Next stop, after a walk through the Old City, was Central Square, looking for the hop on hop off Bus. They have one but it is operated by a governmental travel agency and thus it has not the familiar red colors but its blue and it has a ticket stand inside the Bus. Then for the next 105 minutes (At $ 10 a person) the bus went all around the west side of the city. That is everything west of the old town. Apart from the main thru fare as you cannot get a big bus through the old streets but the route stayed away from the South East part leading towards the lower side of the inner harbor. Still it gave a very good impression of Havana. The wide boulevards which must have been very impressive in the old days, the run down Villa’s (although there is a lot of refurbishment and restauration going on) the communist new builds (some of them very colorful) the Colon Cemetery, very impressive if you are into that sort of thing and of course the Plaza de Revolution with a concrete pole in the middle, which you could see as a space rocket station if you did not know any better. A lot of guests took a tour around the city in one of the large number of old American cars, many of them convertibles and all in very good condition (at least on the outside), but I prefer  the open top bus as you sit higher and have a better overview. 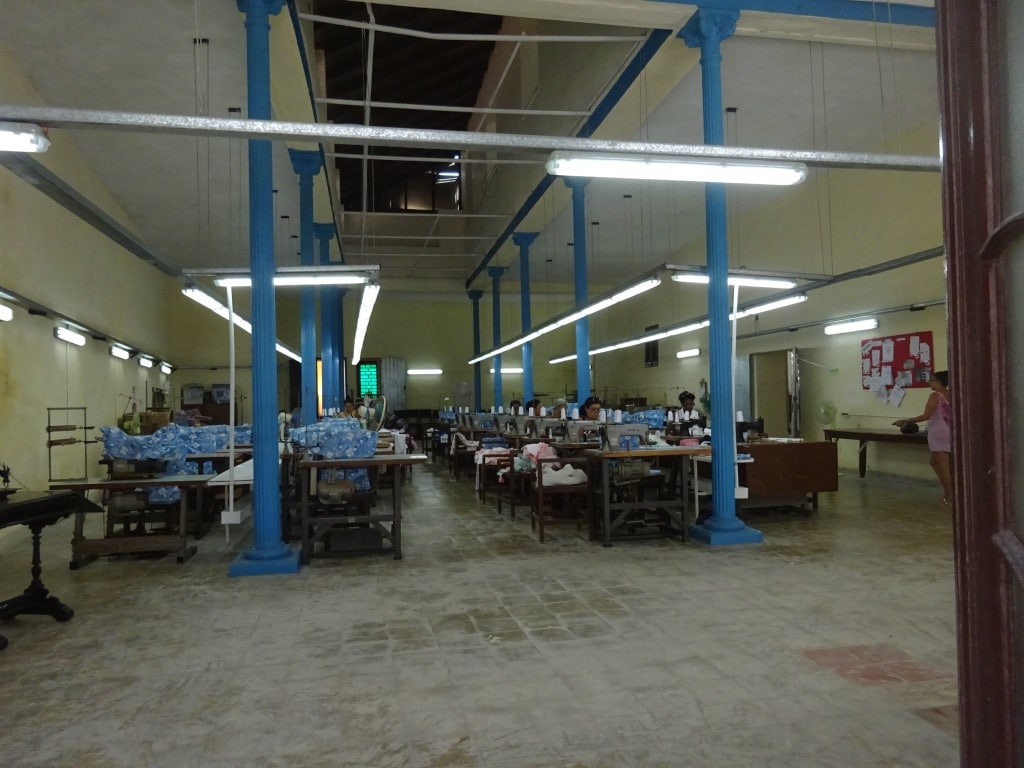 This was the most suprising thing I saw. Right in downtown between the shops and restaurants a semi open air dress factory. The sales shop was right next door

My last stop was looking for 2nd hand book stores as they normally also have post cards and other stuff. I had not planned this but I had time, and my wife can tell you that I have a homing-radar for bookshops, I do not even look for them, I just find them. And here in Havana there are plenty. Lots of revolutionary stuff, but also lots of Stuff from “before”.  Nothing of my interest but one store had some very nice French historical editions from late 19th century and you can buy them but you cannot easily take them out of the country. The antiquarian explained that if I bought one of the older books, it might get confiscated in the terminal “for checking”. Even if it was a book about Napoleon.  He could have sold me the book and then have left me to deal with Customs but he was friendly and honest.  So I contributed some money as a thank you instead to a big red can with a picture of Che Guevara on it. No idea what it was for but it made the youngest daughter happy,  dressed in red skirt and necktie. 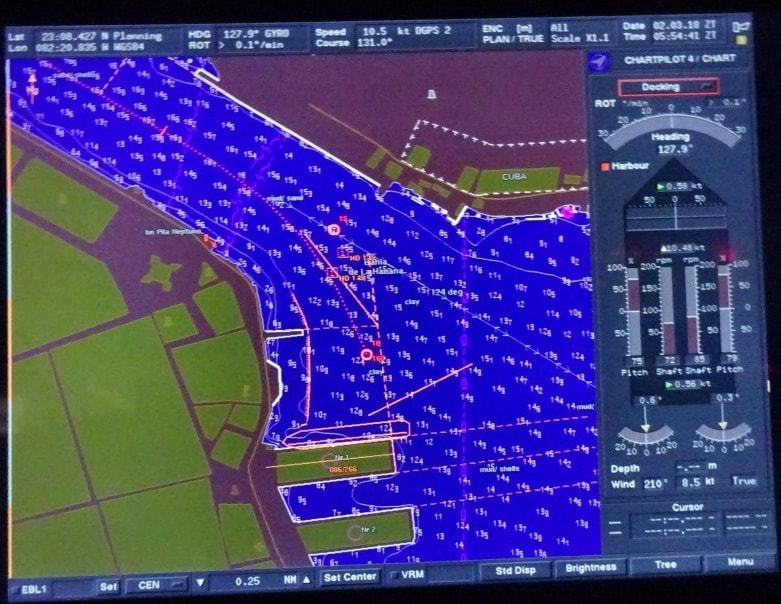 This is how Havana port looks like on the Radar / Electronic map. The ship is to scare and you see we overhang quite a bit.

The ms Veendam will stay until tomorrow morning 02.00 hrs. so the guests can enjoy the night life with all the live music in the restaurants, bars, and open squares. Then we will sail around Cuba heading to Cienfuegos on the Southside for the day after tomorrow. So tomorrow I will put a few things in the blog about Holland America History and Cuba.