Today we were in Arica Chile. Well just inside Chile, barely inside Chile as a matter of fact, as the Peruvian border is only 11 miles to the North. That meant we still sailed along the Peruvian coast for the whole of the night until we passed the border about an hour before we picked up the Arica pilot. The port of Arica is basically nothing more than an L shaped breakwater sticking out into the sea and where the ships dock at the inside of that breakwater. Recently they have added another pier to it on the inside but only for small drafted vessels. Thus we docked at the inside of the breakwater and once again we were lucky with the weather and the swell. It was a gorgeous sunny day with temperatures in the mid seventies and with a very long ocean swell that was running under such an angle that there was no swell in the port at all. The little town of Arica is located just outside the gate and thus for those who were not going on tour there was something to do as well.

Again the emphasis of the tours was on the Inca heritage of this area. My ships day was filled with a variety of items. There was a ship inspection, followed by a ship fire drill and crew abandon ship drill. The latter two are a weekly cycle and as there was no swell in the port, it was a great opportunity to lower the ships lifeboats in the water. Tomorrow we are in Iquique which is a similar port where can hopefully do some more training as during the Antarctic period of the cruise we are severely limited in our options.

The later part of the day was taken up with hanging art work in the new cabins. I explained a few days ago that hanging art onboard always results in enormous discussions about how many inches to the left or right or about what has to go where; so it is much easier if one person makes the decision. The new cabins on the aft part of the ship are currently nearing completion and have progressed now so far that we are doing the finishing touches. TV’s are being placed, carpet is being laid, hand rails installed, entrance doors hung and the art work put on the walls.

Before Valparaiso it has to be finished as then the cabins will all be occupied by the joining guests. All the contractors will leave the ship and will take with them the three containers that we still have standing on the forward deck. I looked at containers for a year when I was a cadet on a container ship and I am getting a little bit tired of being reminded of that every day. I had a very good year as a cadet in 1979 but after 11 months onboard, the container business got a bit boring to say the least. In my 29 years with HAL, I can truthfully say that I have not been bored once while on board, hence I am still sailing.

We left Arica at the scheduled time and set sail to our next port of call Iquique. To get there we follow a peculiar course as Chile has a regulation that forbids gambling inside territorial waters. According to the Chilean authorities that is at least 12 miles from shore and so we steer outside the 12 mile zone to make it possible to open up the Casino. In the coming days opening the casino will become more and more difficult when we sail the Chilean Inside passage and at certain days the casino will not be able to open at all.

However that is still a few days away. For tomorrow the weather looks good with similar weather as today. 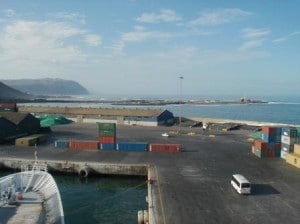 The view from the bridge of the Prinsendam iof the port of Arica, in the distance is the Arica Marina located with the ocean surf rolling in front of it.