With an early arrival came a bit of consternation on the bridge as we could not find the pilot boat. The pilot boat operator has the tendency to switch off all the navigation lights when he is racing to and from the dock in Belize so we can not see him until the boat is very close to the ship and the lights are being flipped on. As the boat is mainly plastic it does not give a good reflection on the radar screen and thus we can not find the boat that way either. When you call him, the standard answer is, pilot will board on arrival, and that is it. Where arrival is, is left to the ship but if you do not know where the pilot boat is located then it is getting a bit difficult to slow down correctly and the “boarding on arrival” by the pilot can be dragged on for quite a bit. In the end I just kept going until the boat suddenly popped up and then I took some speed off until we were down to six knots which is the best speed for this sort of pilot boat.

As planned we arrived timely on the anchorage and by 7 am. we had the tenders going with the tours so my Shorex manager was happy. The weather turned out to be glorious and the guests were able to see Belize at its best. With just a gentle breeze blowing and clear skies it was a regular “warm” day in Belize and I hope that the guests used sufficient sun-block for protection otherwise they were going to have a painful New Years Eve.

We left Belize right on time and sailed ahead of the Norwegian Pearl who was more than an hour delayed in getting all the guests back on board. The pilot on the Veendam was not very happy with that as he would have to wait an hour in the pilot boat before his colleague was ready to disembark from the Pearl when she came to the pilot station. From Belize to Costa Maya is a very short distance and thus we ran on a very slow speed. This was great for the guests on board as we could match the speed with the waves and ran a very stable ship. For a party night as New Years Eve a must; so all can dance and be merry.

The final preparations for the Black and White Ball were, as always, a bit hectic, as the show props have to be removed from the stage and the lounge setup with all the balloons and the black and white decorations. All to be done in a 45 minute window. We were just ready on time and could open the doors at exactly 11 pm. 10 minutes later I led all the officers down the stairs an up the stage to start the ball. The dancing lasted 45 minutes and then it was time for the countdown. This year we had a countdown by means of a large screen on the stage, so everybody could see the seconds ticking away. With a countdown the noise can be so big that half the audience does not hear it. We had the Old Year/father Time and the New Year/Baby on the stage and the oldest guest on board rang in the New Year with the ships bell. 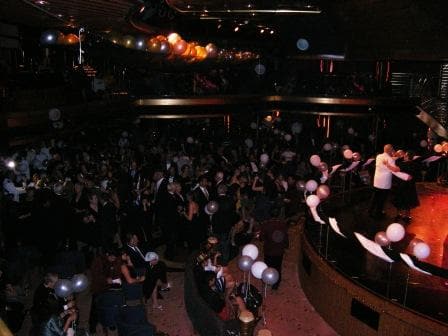 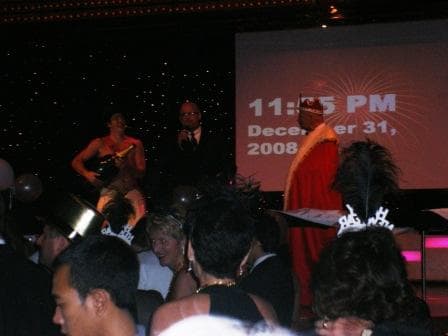 Baby New Year was personified by a club HAL youth staff and Father time by our travel guide who also is the oldeset crewmember on board. In the middle stands Cruise Director Eric Holland, trying to keep all the “mayhem” under control.

I made a round through the ship and the bars were hopping until late in the morning, long after I had retired. The crew was having little parties in their workshops, cabins, mess room, almost everywhere where there was a space appropriate for their needs.

We will be arriving at Costa May around 7 am. and be docked by 8 am. The weather forecast indicates another good day for the beach.