This is a wonderful port as long as the wind does not blow. Because it is on the coast of the North Atlantic Ocean and because the area is flat; there are no mountains ranges to protect it. The churches are the highest buildings in the area, and the same as at home, they seem to attract wind. So both the westerly and easterly winds blow freely over the whole port. If that is the case, then getting the ship into port and parked where it has to go can be quite challenging and not the most favorite pastime of the captain. Today there was not such worry. The wind was about 15 to 20 knots but from the south east and that meant the moment you are in the port, behind the breakwater you are sheltered for at least 50% and you can dock the ship without much of a headache. 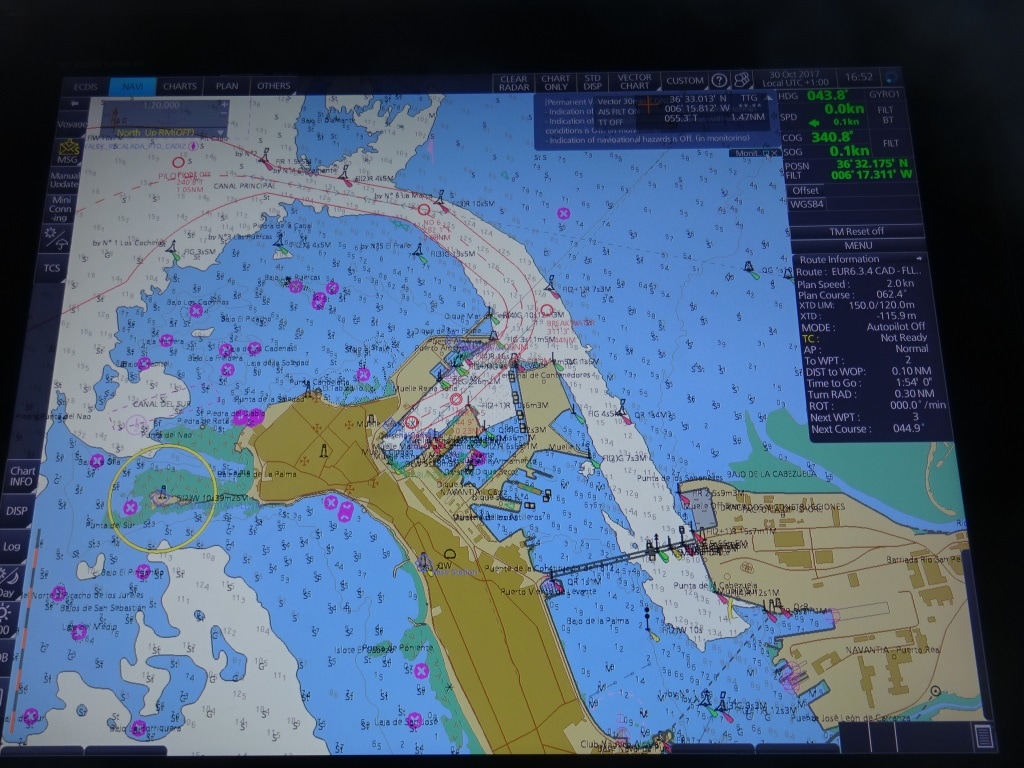 Cadiz Harbor as per electronic chart. A curved faiway leads into the port located behind Cadiz town which sits on a peninsula.

Cadiz is located at the end of an estuary and the port is sitting in the inside of a curve of land upon which also the town of Cadiz has been built. This gives a sheltered port from the ocean swell but on occasion a sailor still has to cope with Ocean Storms or strong winds coming from the South East overland. We had a beautiful day with no wind and a lot of sunshine, which meant that even on arrival and departure we did not have to wear coats while standing at stations.  Standing stations for officers mean: leading the sailor teams at the bow and the stern when giving out the ropes to dock the ship or when taking the ropes in again.

This is the 3rd port where the school class has been either forward or aft to observe and participate in the art of connecting the ship to the port or going the other way again.  There is a whole science behind mooring a ship and although it is basically the same for any ship in any company, the procedure of how it is done varies greatly from one company to another. Especially the way the orders are received by the officer, relayed to Bo ‘sun and the sailors and then confirmed with the Bridge.  To get the ropes ashore, we are using a messenger line which in HAL speak is called a Heaving Line because the way it is thrown or heaved ashore.

This line is caught by the linesmen ashore and then they start pulling at this thin line to get the larger mooring rope ashore. Depending on the expected weather (read wind) it is decided before arrival how many headlines and spring lines (the lines running aft from the bow and forward from the stern station) will be used. Our winches are equipped with mooring drums and so we can have 4 +2: four headlines and two spring lines, on those drums and for normal weather that is sufficient according to the shipyards calculation. If more wind is expected you can give out more ropes, we call those “extra’s”, to provide extra docking security. We can then go to 6+2, or 5+3, or 7+2, or to whatever the captain decides and is comfortable with. I once docked 11+ 7 when a hurricane was expected. 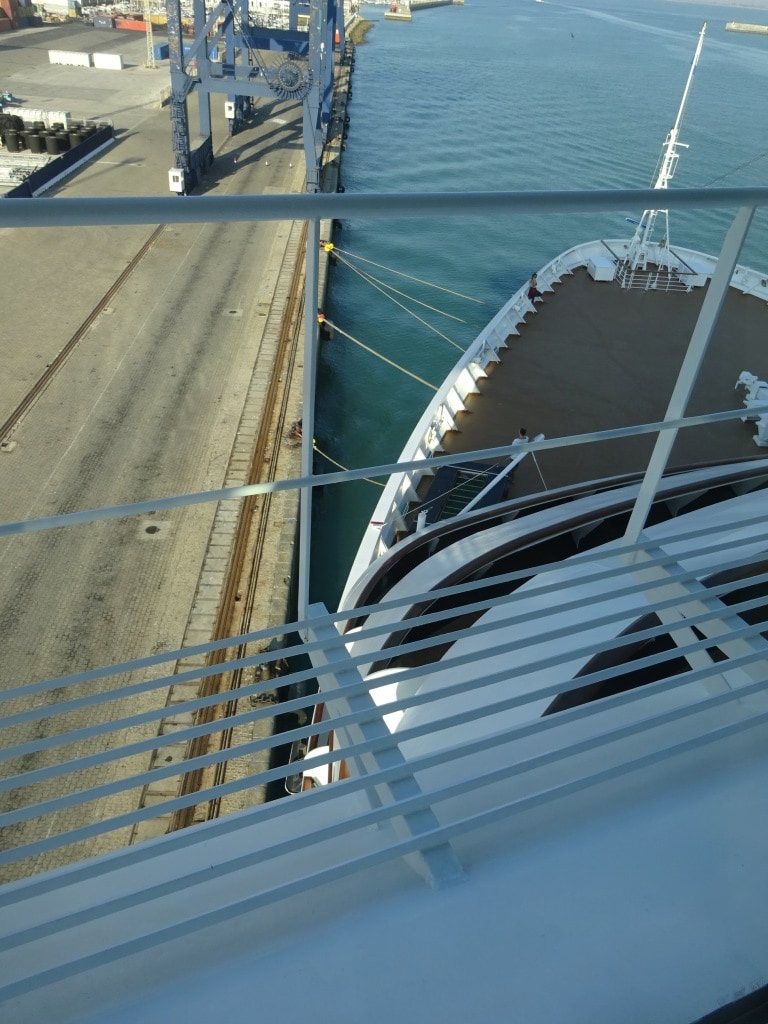 The more bollards you have on the dock, the more evenly you can spread the ropes. The longer the ropes, the better the holding power. I was very happy with this setup.

When the process starts we always give out a spring line first, both forward and aft. On a cruise ship the focus is always on the gangway and the spring lines are needed to bring the ship exactly in the best position for the landing of the gangway and to keep it there. Once those lines are taut and the ships position is correct, then the headlines can go ashore and once on the shore side bollards they can be winched tight as well. Eventually the final configuration is then achieved. Biggest challenge is the communication. The stations fore and aft letting the bridge know the status of the paying out and the coming taut of the ropes,  and the bridge side letting the mooring stations know what is needed, if there are changes and to also take into account the remarks and concerns of the mooring stations if the original plan is not achievable. The latter is often the case, as the ship does quite often comes to a standstill at not the planned location because there is a shore side bollard in front of the gangway or in front of the provision area or an expected shore side bollard is simply not there.

Today in Cadiz it went exactly according to plan. Apart from a Silversea cruise ship, which was at another dock, we were by ourselves and could park wherever we wanted within the limitations set by the harbor master. And thus we had the ropes paid out over several bollards (that is called a nice spread) and the ship was safely moored for the day.

It was a beautiful day and a great conclusion of our first part of the cruise. At 18.00 we sailed for open sea and we started our crossing across the North Atlantic. The captain has chosen the southerly route to get the best weather possible and the first three days look indeed very good with little winds, sunny weather and only a gentle ocean swell to contend with. How we decide on that sort of thing, more about that tomorrow.