On the southbound run we substitute Skagway for Haines. That was decided a long time ago, to give the guests who do an up & down cruise at least one different port. Now it would be hard to change it, even if we wanted to, as the docks in Skagway are full on a day like this. They had four biggies docked there today and that filled up all the docks to capacity. When the whole convoy goes up the Lynn Canal it is funny to see on the Radar one ship suddenly breaking away. E.g. number two breaks ranks and veers off to port to go to the Haines dock.  This dock is tucked away in a curve of the bay which is attached as a sort “bulge to the West” of the Lynn Canal. Sheltered from that ferocious funnel wind that can blow through the Lynn Canal it often has wind still weather and it is on average much less harsh than Skagway. That does not mean that it does not get its share of Alaskan weather. It does and certainly today. Forecast was a 90% chance of showers and we did get the whole 90% on the deck. It made for a cold and miserable day although it did not seem to deter our guests on board. Shortly after arrival the ship emptied out and all ran ashore to sample the delights of Haines and surrounding area. 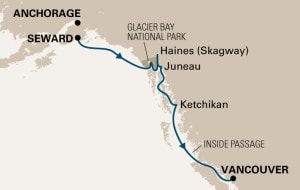 Haines is located just around the corner from Glacier Bay and if there had been a direct waterway between the two areas we would be able to cover the distance in about 4 hours. Same as Haines to Juneau, again with no mountains in the way it would only be a short hop. Was that the case then it would be questionable whether there would be any cruise business here in Alaska. The lack of roads in some cases is because it is not economical viable to build them, and in some cases because it is practically impossible to build them, means that most transport has to go by water.  Most places have a smaller or larger airport but that is not an option to get larger number of tourists around in a comfortable way. All freight and commercial goods go by barge, mainly with Seattle the starting and ending point. Vancouver is less of an option as that is foreign country as far as import and export is concerned.

Those tugboats and barges fly the USA flag and as such they are pilot exempt. The cruise ships, except the very small ones, all fly non-USA flags and as such we have compulsory pilotage. That is provided by SEPA. The South East Pilot Association.  This is a private organization that is under strict regulation of the State of Alaska and so ensures the safe passage of commercial ships in South East Alaska. Their jurisdiction starts at the US/Canadian border and roughly ends at Yakutat Bay and Hubbard Glacier.  From there pilotage is provided by the South West Pilot Association which operates from Valdez.  Because we spend three day or four days in the Alaskan Inside Passage, there are always two pilots on board who split up the periods that we sail between the ports.

The legal requirement is that the pilots, while underway, have “ the conn” of the ship. That means they decide the courses and the speed that the ship makes. This of course happens in close co-operation with the ship as the pilots are also there to provide service so we can carry out our cruise program. Longtime in the past, the pilots and the company’s sat together and agreed on the regular courses that would be run while sailing, so there would be no disagreement about what is a “safe course” and what is not. With the speeds of the ship it works slightly different. The captain sets the average speed to maintain and the pilot goes along with that as long as it is a “safe speed” he or she can work with while navigating.  He or She is because SEPA also has two female pilots for a long time now. Although pilotage is still very much a male business you come across female pilots on occasion.  One of the two ladies has been around almost as long as I have been on the coast and is now one of the most senior pilots in SEPA.

As a result I do not see them much anymore as seniority in pilotage means you get qualified for bigger ships, higher tonnage.  This comes out of the rules for the cargo industry where larger ships make a difference in handling.  For the cruise ships it is a bit of a moot point, as size does not matter much here anymore and also the ship handling is fully in the hands of the ships masters.

By 8 pm we pulled out of Haines and as all ships are more or less on the same schedule, we rejoined the southbound convoy from Skagway. Ahead of us the Norwegian Jewel and behind us the Norwegian Pearl.   It will be a slow run to Juneau and even with a speed of only 10 knots; I will be arriving there at 06.00 hrs. Weather for tomorrow; another 90% chance of rain.