By 06.30 we came around “the bend” and passed the southern most boundary of Glacier Bay. Ready to embark the Rangers at 07.00 hrs. So the pilot called the dispatcher, only to be advised, No Rangers today, the boat has broken down. That was not very good news; what to do next. I could go up the Bay without the Rangers as I have a very good On Location Guide on board who could do the job but the Rangers are an integral part of the whole Glacier Bay experience, thus that was not the perfect answer. What was perfect was the weather, wind still and only a bit of drizzle which indicated that it would nice and dry further up the bay. So what to do next. ? 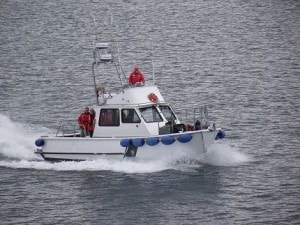 The Rangers boat, the Serac, which normally ferries the Rangers to and from the ship.

Time to get the calculator out; to see if I could afford the time to send a tender ashore to pick them up. That was not a difficult situation as I knew there was not that much ice in the upper Bay and I would be able to keep up the speed until very close to the glacier and thus make up some time again. So, yes let’s lower a tender and pick them up. All our training paid off here and a tender was very quickly launched and sent over to Bartlett Cove Ranger station. A ride of 20 minutes in and 20 minutes out. It took exactly an hour to get the tender down, the rangers on board and the tender home again. Now the whole scheduled program for the day could take place and all was well in the world. The only ones who might have noticed it are my blog readers as I could only write yesterday’s blog in the evening, due to the fact that this all happened when I normally have my breakfast and write the blog. Resulting in a later upload.

We can see that the season is slowly winding down as the whale concentrations are going down. Hence the Ranger department is lifting the speed restrictions for the ships in the lower bay, starting tomorrow. The chance of hitting a whale has dramatically reduced and thus we are allowed to go a bit faster. That does not mean that we did not seem them. On the contrary quite a few were clearly visible near the shore lines and were happily flapping about with their tails. Fish otters, sea lions, Bald Eagles we had the whole list of options available today.

On top of that we had Orca’s. Not just one or two orca’s, but a pod (or two pods) of at least 12 of them. Big Papa’s, big mamas and a lot of small kiddies. And they were clearly visible as they were right on our track line. Thus we zigzagged around them. Some of them did not like us looking at them and disappeared but the majority was quite happy to put on a show. It was the first time this season that we saw Orca’s in such large numbers.
This is not unusual near the end of the season. Wildlife seems to have more time to put on a display, than earlier in the season. That brings me to a question that a lot of people ask me: what is the best time for an Alaska cruise? And there is no real answer to that.

1. Early in the season. Still snow around. Winter wonderland with pristine and crispy weather but not too much wildlife (whales are still on the way to Alaska. But many dry days.
2. High summer, warm temperatures with all the towns in Alaska in full tourism swing. Easy to spot wildlife. Rain showers possible throughout the day.
3. Late season. Weather can be tricky, with more rain and sometimes storm and colder temperatures but you can be lucky with an Indian summer. The wildlife is abundant and has time to put on a show.

So there is not a real time of the year that is the best. I always enjoy the first week of the season the most. Nature is awaking from hibernation and everything is still fresh. The mountains and hills are still completely covered in snow all the way to the water line, and it looks as if you are sailing through a Christmas postcard.
We had perfect weather in the upper bay and Marjorie glacier did some calving which made everybody’s day. By 5 pm. we were back at the Ranger station and we lowered our tender again. I had been able to make up all the lost time from the morning, without compromising the viewing times in the bay.