The weather did have a surprise in store for us but it was a nice one. To the West of Cabo San Lucas, there are two tropical lows developing. They might even merge and turn into a tropical storm. Not much concern to us as they are far to the West and we are sailing away from it anyway, as we are going south. However based on the principle of the “giant vacuum cleaner” these lows are now starting to suck/pull all the moisture in their direction. That resulted in a sky with a light cloud cover and that brought the temperatures down with about 10oF. Down to the low to mid 80’s. A lot better for the guests than during our call 5 days ago. We were again the only ship, and the pilot expects that we will have that privilege for the rest of the season. So we docked at the Cruise terminal again and today we went portside alongside.

The deck department is still busy with the yearly recertification of the lifeboat and davit system and for that we needed boats to be lowered again and this time starboard boats. In the next port Hualtalco it will be port side boats, so we go starboard side alongside. This all has to do with our renewal of our Passenger Ship Safety Certificate. This is part B of the ship’s passport that gives us the right to sail. Part A, is the license by the Dutch Government, which guarantees that we are a Dutch flagged ship and under the protection of the Kingdom of the Netherlands. Part B, the PSSC or safety certificate denotes that the shipboard equipment is in good order and the ship is safe to operate. That is verified once a year by Inspectors from Lloyds Register on behalf of the Dutch Government. They will be sailing with us next cruise. A compulsory part of the preparation for the visit of those inspectors is a: ensuring that the lifeboats can leave the ship and b: that they can be lowered. Last cruise we worked on part a: this entailed that all the lifeboat release hooks had to be inspected and tested. These are the two hooks, one in the bow and one in the stern of the boat, which are opened up when the lifeboat hits the water. That is achieved with a central handle, being pulled by the lifeboat commander. An important piece of equipment, which is taken apart and overhauled completely once a year. That was done last cruise and for that the boats needed to be free from the falls (the wires in which the boat hangs). 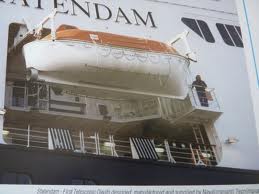 Boat nbr 1. of the Statendam being extended by means of the davit arms, after which it can be lowered to embarkation deck.

This cruise we have service technicians on board for the davit system. We have a rather complicated system on here that operates the davits either by winch or by hydraulic pressure. This makes the lifeboats first go sideways and then go down.

The PSSC inspectors demand a full inspection of this system every year by experts before they sign off on the lifesaving part of the PSSC. Any remarks or observations can then be taken care of before the PSSC inspection is finalized. This year it is slightly different as the ship is going into dry-dock in January.

As the Statendam is 20 years old, there will be a 20 year survey and that means that the complete davit system will be stripped for a full inspection. So this time the inspection will focus to see if any extra work needs to be done during that dry dock. I am not expecting it, as the davits are very well maintained, but there are area’s in the davit system which we cannot access without specialist help. Thus we have two technicians on board from the manufacturers, Navali Amplianti and thus I have to park the ship in such a way that they can do their job.

We sailed at 1700 hrs. out of the port and back to the North Pacific Ocean via the Bahia de Banderas, a sort of bay at which end Puerto Vallarta is located. Then by 1900 we suddenly had 50 knots of wind for an hour. Nothing in the forecast and no tell tale signs around us that indicated that it was coming. But the wind was suddenly there. When the moon came through we could see a very tight band of thick clouds moving from the Mexican mainland towards the area of the two tropical lows to the West. The principal of the giant vacuum cleaner was gathering momentum.

Tomorrow we are at sea. It should be overcast with some showers as we are still under the influence of those tropical lows. One good thing about it: The Caribbean is so much affected by this and by the aftermath of Sandy, that we will not have a tehantopec wind this week.