Another day in (Danish) paradise. Today it was nearly windstill and the temperatures crept up to the very high 70’s. No other cruise ship came in and thus the guests had the whole city to themselves. It made me wonder therefore, why the harbormaster had parked us all the way forward at the Lange Linje instead of all the way down where we normally are. That part has a few little shops as well; carved out in the stone walls of the upper pier level. However such are the vagaries of life. At least the Chief Officer was a happy camper with a rented cherry picker for two days. He could paint the whole portside during this stay. So we are finally catching up with the aftermath of the dry – dock in last January and all the ports in South America and the Mediterranean where outside maintenance is simply prohibited.

We spent the morning doing drills and as nearly all the guests were ashore, I could really enjoy myself setting up a big fire drill. I try to participate as much as possible in the drills. Sometimes I play the captain, doing overview and just monitoring the situation and sometimes I leave the chief Officer to run the whole show and I setup the drill and prepare some surprises for the firefighting teams. One of the dangers of drills onboard is the limited number of scenario’s that we can en-act. We only have so much space
onboard and we try not to inconvenience the guests too much, who are on vacation and normally have paid a lot for that. Today most guests were ashore; either on tour or tempted outside by the glorious weather. That made me decide to throw a fire drill in the show lounge. Nothing is more difficult or dis-orientating than to have to find your way around in zero visibility in a big open space. None of the crew of the Prinsendam had ever done something like this before, so it would be something completely new.

I asked the Stage manager to pump as much stage smoke into the lounge, set the spot lights on red flashing to simulate a stage fire and play some loud music. The problem is not so much fighting the fire; it is the search for casualties in the lounge, after the fire has been brought under control. Then you have to search the whole area. That is done by a “right hand search” with firefighting teams in full SCUBA gear going around following the bulkheads for guidance. This is their “anchor” of recognition and will lead them out of the area again when the time comes to for a new team to take over. Once you loose contact with the wall, dis-orientation will set in, and your only hope left is to follow your fire hose back to the beginning. A technique which we then use is to connect the various members of the teams with slings. If it is safe to come from behind the hose (which forms your protection against the fire), one team member remains in position and the 2nd one connected to him via a sling can venture out a little bit to explore an area away from the wall. If it is safe, number three attached to number two, can do the same and in such a way a team can sweep a large area. To recognize victims, we have a thermal imaging camera, which shows in infra red where, “hotspots” are but also victims as their body temperature is normally higher then the surrounding area.

The hand held thermal imaging camera. Working on infra red it shows colder and warmer area’s in different colors on the screen. 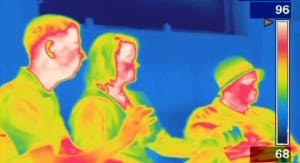 The way bodies show up on the screen. Blue is cold, deep red is warm. The gauge on the right hand side shows the temperaure scale in Fahrenheit.

In the end all victims were found, but as we seldom work with light flashes and sound/noise, the teams had to adapt as suddenly communication had to go fully by hand signals and that in a dense haze. Next drills will be small ones where we will concentrate on reviewing parts of this whole concept and then we are doing a big drill again. I am thinking about something with 30 victims, so we can involve the medical department with a full triage rehearsal. We have two bags full of gadgets for that sort of thing and not all crew involved have seen those yet in operation.

We left at 1700 hrs. and sailed south through Drogden channel which connects the Oresund with the Baltic Sea. I will be at Warnemunde pilot station tomorrow morning at 04.00 to be docked by 015.15 hrs. this way I will not be delayed by the ferries that start coming in just after 5 am. I have to be on time for the Berlin train connection. It looks like another sunny day tomorrow and thus good weather for the guests on the tour to Berlin.