Copenhagen can be approached in two ways. From the North through The Sound (Oresund) and from the South through Drogden channel. However Drogden channel has a limitation of maximum 8 meters draft. Ships with more draft that want to go to Copenhagen or other ports in The Sound, have to sail through the Great Belt (Store Belt). First all the way up to the north point of Sjaelland, the island on which Copenhagen is located, cross the Kattegat and then down again into The Sound. When I sailed here with the old Noordam in 2001, the Drogden channel had a maximum allowed depth of 7.2 meters and we had to go every time around the island to get in and out of the Baltic. (The Noordam had a draft of 7.5 meters) That was not pleasant as it meant the whole night standby for me. Now with the increased depth of the channel, that issue is over for most ships and it saves a lot of time. 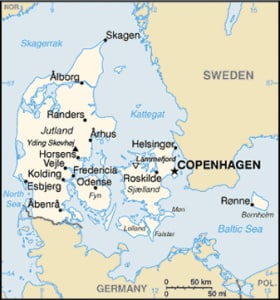 Copenhagen is located on the biggest island of Denmark called Sjaelland.

Thus instead of a full night standby, it was wake up time at 04.00 as we approached the Drogden pilot station at 05.00. While we were doing so the Prinsendam was shaking quite a bit. Not that there was anything wrong with the engines or the propellers, no, we were suffering from squat in shallow water. (Digging in of the ship due to the speed) When a ship comes in shallow waters, the water that is displaced by the hull moving forward has difficulty flowing away under that hull as there is not much space between the ships bottom and the sea bottom. If the ships speed is higher than the flow can deal with, a sort of interaction occurs under the keel and then a shuddering/shaking starts. We had a minimum of 6 feet under the keel all the time but still the squat influence made itself known. The only solution is to go very, very slow so the squat of the ship reduces (e.g the space between sea bottom and ships bottom increases) and as the speed reduces there is more time for the water to flow away as well. However we also have to get to our destination so I had to find the happy medium. A bit of shaking and a bit of speed.

Drogden channel is of course very popular with the ships going through The Sound as it saves all that time going around Sjaelland. Thus when you come out of the channel there is sometimes a lengthy wait before you can change course to port, cross the mid channel approach track into Drogden and line up for Copenhagen harbour. We had luck this time, there was a nice gap between two opposing ships and we could continue unhindered towards the harbour entrance. That gave me enough time to swing on arrival and dock portside alongside the Lange Linje. The best dock there is; as you can walk straight into town and if you do not want to, there are little shops right opposite the pier.

The big topic of the day among the locals was the lending out of the Little Mermaid to China for an exhibition. While she is there, her place on the rock will be taken by a Chinese mermaid. It seems that Copenhagen is divided in strong pro and con camps as friends talked about it and the pilot when asked was rather “clear” in his idea’s about it as well. The little Mermaid is only a 10 minute walk away from the ship although most guests will only see it during the tour. It looks on postcards much bigger than it is and I still wonder how such a small statue could become so world famous. Not that I do not like it, it is very nice, it is just not very impressive in size. When I was small and received postcards from Denmark, sent by my uncle, I had this impression of a 2 or 3 meter high statue by looking at the postcard. But it isn’t. I think 90 centimeters at the max. or so.

Sail away from Copenhagen is very scenic affair. Especially on a sunny day as we had today. In the middle of The Sound is the island Ven, dotted with little houses and a small town. Only way to get there is by a small ferry from Landskrona on the east shore of The Sound. Very nice to sail by. The border of the The Sound and the Kattegat, the water area above the top of Denmark is marked by the two cities of Helsingborg ( Sweden) and Helsingor (Denmark) 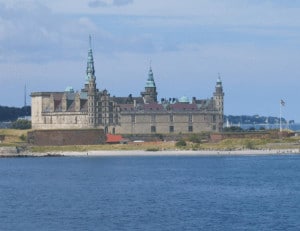 Kronborg Castle overlooking The Sound from the Danish side. Although Shakespeare never visited this place, he made it very well known.

The Helsingor point is dominated by a castle where Shakespeare situated his play Hamlet, containing the famous words “There is something rotten in the State of Denmark” I cannot recall exactly what was rotten there but the castle itself did not look rotten at all. It is a very impressive and attractive building. Between these two cities with almost the same names, runs a ferry service, which always causes some anxiety on the bridge. When the ferries come in from starboard, they have the right of way and they will take it. When they come in from the portside they have to give way and they do. However the safety margin they apply is a lot less than we deep-sea sailors are used to, so we are always carefully watching how it will go this time. It always goes right, but still. This time the ferry Hamlet came in from the portside, but he had to put the brakes on as there was a large car ferry passing in front of him, and by the time that ship cleared we were right in front of him. So the ferry sat there for a few minutes while we sped away Northwards.

Tomorrow we are in Oslo and our arrival is set for 10 am, so the guests can see the passage through the Oslo fjord at a decent time. Weather looks good for tomorrow with temperatures in the low 70’s. They are expecting a heat wave near the weekend with high 90’s but then we are already in England.

Note: also uploaded today, the Prinsendam employee of the month of June 2009.