Aruba is a place which make captains always think about it for a second time. And that is due to the wind. The Trade Winds which blow over the whole of the Caribbean gather more and more momentum while getting further to the west and if they are already strong to start with, they are blowing a gale by the time they reach the Dutch A, B, C islands (Aruba, Bonaire and Curacao). The problem with Aruba is, that it is flat, really flat, although it has one mountain called the Hooiberg (Hay stack) but that one is too far away from the port to provide any shelter from the wind. In Willemstad, Curacao, it is not so big a problem as the docks are more in line with the Trade Winds, so the wind does not make the ship drift or (for the docks inside the port) there is some shelter from the surrounding land.

Here in Oranjestad there is nothing, the wind blows freely over the port and to come alongside, the ship has to push sideways against that wind. Thus even more than in other ports, the Captains first question is, when arriving on the bridge, How much wind and what direction? Oranjestad still has tugboats which can be called out as apart from Cruise ships it also has a cargo port for containerships. And that is always a relief as there is now a plan B. Those containerships catch as much wind as cruise ships do with all those boxes on deck and their high freeboards, but they normally do not have bow and stern thrusters as the cruise ships have and thus need tugboats. But if the wind is full on the beam of a cruise ship and it goes over 30 knots, then we also need a tugboat to help us. Wind is a peculiar thing and causes a different reaction to different ships. If the ship has a straight and closed vertical hull (as a containership has or a car carrier) then some of that wind is deflected by the hull and literally blows away.

The line up of berths in Oranjestad, Aruba. Except for the small berths F, G,and H all the berths are nearly perpendicular to the wind. What is indicated here as the Container Berth is now also a Cruise terminal. The container ships now have their own dedicated port close to the airport.

With a Cruise ship that does not work as we have balconies. The wind blows in, cannot deflect or bounce away and gets sort of stuck inside. Thus if the wind blows with a velocity of 30 knots, we get 30 knots inside the balconies and nothing of that force is deflected because the hull is holes; balcony holes. And thus captains worry about the wind. Luckily today the Trade Wind was moderate and the sailing into port and the subsequent going sideways and docking was not really a problem. 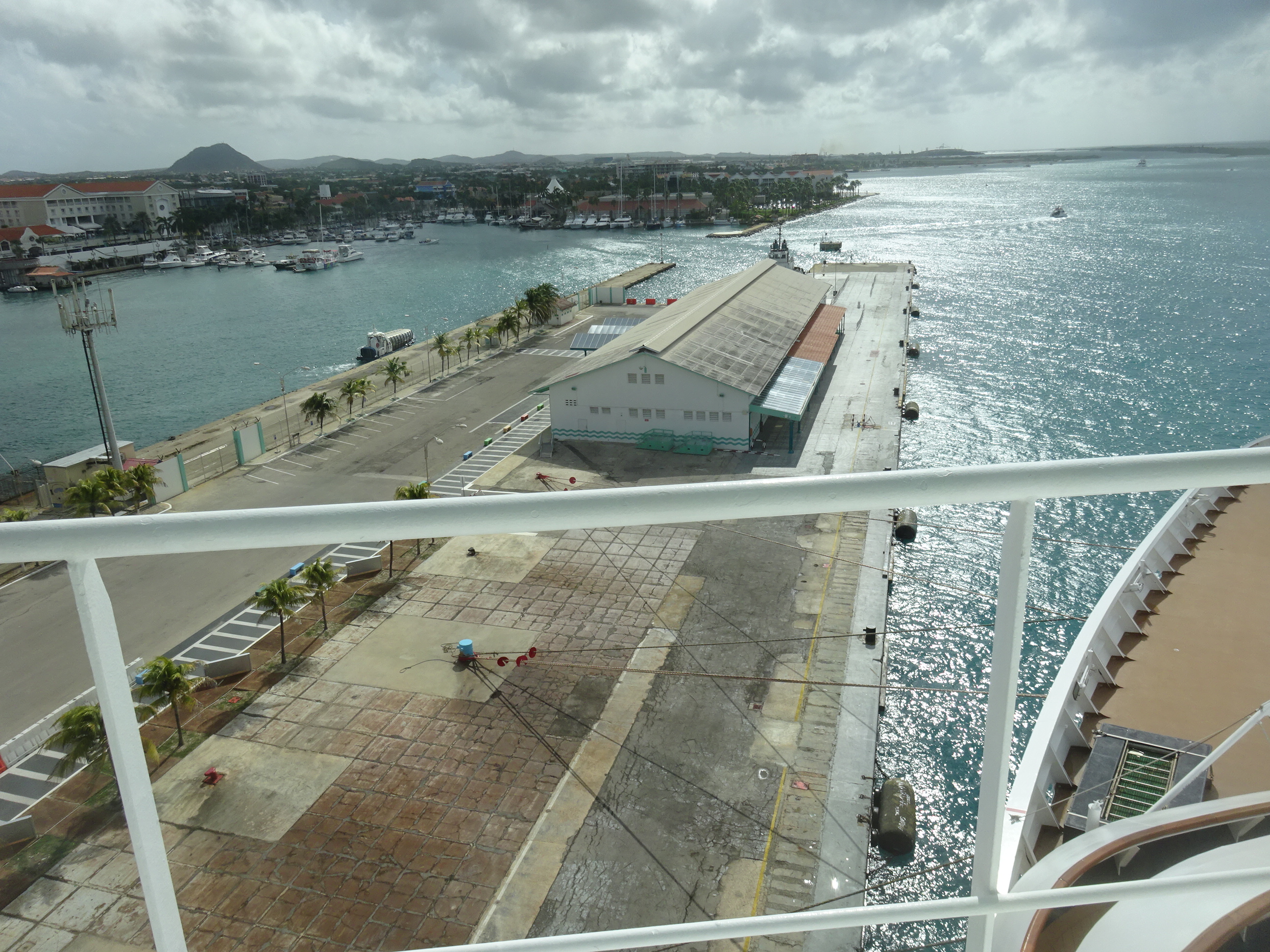 The center cruise berth, berth C in the port. Note the way the bow lines go the bollards away from the edge of the dock. You will find these bollard configurations only in ports where there are strong and predominant winds on angles close to 90o to the ship.

The port of Oranjestad, called the Paardenbaai (Bay of horses as here in the old days it was where the horses were landed from the ships) is prepared for these sorts of very strong winds and has bollards for the mooring ropes not only along the dock but also at a 90o further inland. That makes it possible for breast ropes to be put out at a 90o angle and thus ensure maximum holding power to keep the ship alongside. Then for departure we try to let go these lines at the very last moment and then practice the “blow away maneuver” while gaining forward momentum at the same time.

Oranjestad is most of the time in the ship schedule as the last port before the Panama Canal as it is a perfect getaway port for that purpose. With a day at sea we can nicely reach Cristobal for the day after for a 0500 or 0530 arrival. The PCA (Panama Canal Authority) normally likes us to be early, so we can  be scheduled early into the convoy and hopefully in such a way that there are no –slow boats- ahead of us. For the guest it does not make a difference for their Canal Experience whether they are there from 0600 to 1800 hrs. or from 0600 to 1500 hrs. We are not going that fast that we would miss things and the times in the locks remain the same. But it is nice for everybody if we can have the last Canal Lock behind us before 16.00 hrs. so the guests can be on time for Happy Hour without missing anything.

Aruba is part of the Kingdom of the Netherlands, but has a “Status Aparte”. Which has to do with the fact that nearly their whole economy is geared towards the USA and not towards the Motherland. So they are part of the Kingdom but not really integrated. The Netherlands does not have much of a problem with this as an independent booming economy is much better than having to rely on the goodwill from far away. Still it has the Dutch King as the head of State and the Dutch Forces and Border patrol to protect its shores. The Dutch language is still widely spoken but not compulsory and necessary to lead your life to the fullest on the Island.

So tomorrow we are at sea, sailing north of First Venezuela and then Colombia. The weather looks good but I think we will get some motion because once we turn to a South Westerly course towards Panama, then we get the swell on ¾ of the sb. Stern. And that means that we get this corkscrew motion with the ship, somewhere between rolling and pitching. It sends the stabilizers in overdrive but they cannot completely deal with it due to the angle of the waves onto the ship.  As always, the ms Rotterdam (VI) has a large number of hardened repeat guests on board and thus I do not expect that this will cause too much hardship but it can be annoying at times, especially as we can do not anything about it.