We did pay for the nice weather outside Ketchikan. We had hardly dipped our nose into the Pacific Ocean, when a big white woolly blanket covered Stephens Passage. We were sailing in tandem with the Golden Princess who had caught up with us from Ketchikan. She was just over a mile away in a blaze of lights but we could not see anything of her. It was dense, very dense. Various fishing boats and the Celebrity Solstice coming down from the North, kept us from being bored on the bridge but it was not until 4 am. before visibility improved. Still with an approach planned for 08.30, I could get a few more hours of sleep.

Once we could see something again, it was clear to us that Juneau was going to be a great day. No wind; important for me, and a lot of sunshine and no rain, which was important for the guests. We were docking at our regular spot, the Alaska Steam ship dock, right in the down town area. That meant gliding in past the Oosterdam, which was already in position and makes it a bit tight when coming alongside quickly. Gently, gently is the word here and so we did. By 09.45 we had the gangway out and a steady stream of guests went ashore. I think we emptied the ship out in 45 minutes.

Our day was filled with training. We have a system in the company where we train in standard bridge watch procedures. This has mainly to do with the teamwork on the bridge and to ensure that we use proper communication at all times. All members of the team should at all times be aware of what the rest is doing at that means that you have to follow certain routines. Sometimes you are so focused on what you are doing, that you tend to forget that and thus it is always good to have training. One of the things that is involved with it, is called “Thinking Aloud” it basically means that you keep a sort of narration going all the time while you are doing things. This means that when I am docking the ship, I announce/explain each handle that I move and the reason behind it. A great way for the juniors to learn what is going on, and the why, but also it creates a safety net, so that the person who is watching the whole happening such as the Officer of the Watch or the Staff Captain can say something if they think there is something going wrong. 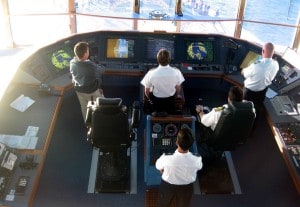 A complete bridge team in operation. In civvies to the left, the pilot. In the centre the officer of the watch, in the chair the captain with the overview and to the right, the officer for the communication. Behind it all the Helms man. This is more and more the bridge concept that people will see on newer ships.

This is a new way of thinking that has been slowly taking hold in the industry. The days that sailing was a “one man show”—read the captain — are far behind us and now everybody on the bridge is involved in the whole evolution. Apart from the fact that it reduces the change of mistakes, it also helps with the training. There is a much higher turnover in the industry than that there used to be and that means that we need a much more formal training program than before. In the past the officer, while going through the ranks, had time to watch observe and learn. Now the promotion is so fast that we have to transfer knowledge much faster in order to get the same results. People still want to learn the seafaring job but the numbers that are planning to stay for their whole career are getting less and less.
To keep us fully focused this way, we have two captains going around the combined fleet of Holland America and Seabourn to ensure that all the ships are and remain on the same page. The controlling force behind this is Carnival Corporation which ideally would like to see that all the brands, all the 110 cruise ships that it controls, would operate in the same way. So if I would cross the street and assume command of the Island Princess tomorrow, I should find the exact same routines there as with Holland America. The only thing that would be different would be the product offered to the guests. I am all in favor so I welcome any training that adds another element to the improvement of safe navigation.
After a glorious day in Juneau we pulled out just before 10 pm. and set sail for Skagway. The weather forecast is promising a similar day there, so I am keeping my fingers crossed. It would be nice to have a windless day in Skagway.