Today everything worked like clockwork. Port Control and Pilots were in agreement about our arrival time and all other traffic was told to hold off until the good ship Statendam had duly entered Cartagena Bay.  The pilot hopped on board exactly on time and 5 minutes later we were sailing through the Boca Chico entrance. From there it is roughly 45 minutes to approach the dock and that gave me the time I had hoped for, to swing around and dock stern in at the pier.  The weather forecast was indicating very strong winds on departure and that would make it more difficult to swing around, to bring the stern up into the wind and then to make speed for lining up in the exit channel from the cargo port. On arrival it was wind still and thus perfect weather to swing around and be ready for a quick sail out. By 0845 we were happily docked for an official 0900 arrival.

More amazing was that the Bunker barge was on time. Normally it shows up about 45 minutes late and that means that it always delays our departure. Time I can ill afford to lose, as wind and current in the Caribbean Sea are not always favorable. I had been pushing the agent to get the message across to the oil company that I would not wait until all the oil would be on board and that would mean that they would lose sales as we pay for what we load.  Thus, suddenly, the bunker barge was on time and even more amazing, they were finished right on departure time. We loaded 800 tons of Heavy Fuel Oil (HFO) and at $ 788 a ton, they made a nice sale today.  Together with the oil still on board, we will be able to make it all the way to San Diego, where we will bunker again.

Cartagena does not have a cruise terminal and thus we dock at the cargo piers, which are now nearly all in use for container transfers. Although a cruise terminal offers most of the time, some extra facilities for guests and crew, I do not really mind docking at a cargo pier. Certainly if they are as nice as the ones here in Cartagena.  Being docked at a cargo terminal gives you the option to see how this whole container operation works, which for people who live away from the ports, must be fascinating. Maybe even for the people who live in the ports as the container terminals are nowadays far removed from the city centers and then due to the current security regulations fenced off as if they are nuclear power plants.  Here in Cartagena you can sit in comfort on a cruise ship and see it all happening less than 500 feet away. 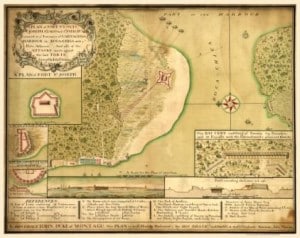 With a bit of google magic I found this ancient chart on the Internet, but it still gives a good overview of Boca Chica. The two Fortresses on each side are still there and the navigable part of the entrance is about the size of the vertical letters BOCA CHICA in the middle.

We sailed right on time and by 4 pm we were in open waters again. Getting out through the Boca Chica entrance fairway was quite a happening as with over 30 knots of wind on the beam (the wind started to blow exactly according to the prediction of the weather forecast) we were drifting considerably . The outgoing course is 268o and we had to do nearly 275o to stay in the middle. As the channel is not very wide, the ship took up really the whole width of the fairway. The faster you go, the less drift there is, but you cannot go that fast through here, as it is very shallow and with increased speed you get increased draft (called squat) and that means even less water under the keel.  Hitting the bottom is something you want to avoid at all times, so you have to find a happy medium between maximum speed versus minimal squat.

In the evening I held one of my parties and there I was approached by a family with a young boy who had a nice story to tell. He had been standing on the aft deck when the ship went into one of the Locks in the Panama Canal yesterday. While looking over the railing, his glasses fell off and into the locks. Very luckily, they fell onto the concrete side of the dock.  (makes you understand how little room we have when squeezing through). With even more luck, a Panama Canal Worker saw the glasses falling, picked them up and threw them back onto the ship.  To have an experience like that, must mean that you were really born under a lucky star.

Tomorrow we will be crossing the Caribbean Sea from South to North on a course of 007o until we reach The South point of Haiti were we will enter the Windward Passage.  It should be a breezy day with the wind full on the bow but by the day after it should start to get calmer.