Thus we spent our 2nd day at sea, sailing along the coast of Costa Rica and Panama. Because Panama is located in this curve of the continent it is a distance of 80 miles into the Bay of Panama from the moment you come around the SW corner of the country. We saw an increase in traffic on opposite courses and although not as much as I was expecting it meant that most of the ships exiting the Canal where either going South or West straight across the Pacific. This was confirmed when we came closer to the Canal and we could read their AIS transmissions. (Automatic Identification System) This is a gadget that each ship over 300 tons has on board and it continuously transmits ships specific information, such as name, position, heading speed, what sort of ship and where it is going. The ship appears as a little triangle on the radar and if you click on it with the curser, all the information is displayed. Thus we could see where they were going. One poor bulk ship had as final destination Geelong and was going to arrive there on the 27th of April. A voyage of a month of which much is sailing in Open Ocean and seeing very little. I wonder what they do on that ship to avoid boredom??? 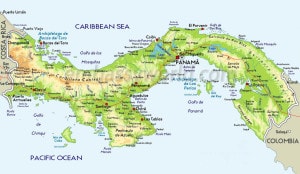 The State of Panama.  Coming from the West in the Pacific, you have to make a sharp turn passing Cabo Mala and from there it is 80 miles to the Anchorage of  the Panama Canal. (Map courtesy; embassyworld.com)

I once did a North/South Pacific crossing from Hawaii to Sydney for 10 days with no passengers on board and the crew were starting to get bored after 5 days, as we had cleaned whatever we could clean and they were starting to get withdrawal symptoms after 7. Arriving at Sydney came as a sheer relief. We were there with the Nieuw Amsterdam as a hotel ship for the Olympic Games in 2000 and of course everybody was looking forward to that. But sailing for such a long time without guests on board, made everybody very jittery. Going back after three weeks was less difficult as the ship was going to be sold and the whole crew was very much occupied with packing up and making the ship ready. Still it was an interesting experience for me to see that the crew felt uncomfortable not having anybody to look after and to care for. We also saw several of the large containerships coming out. They are the Panama MAX vessels; which means they are built to fit exactly in the locks with very little room to spare. Most of them are employed on a around the world service, calling only at the major sea ports, such as Rotterdam, Felixstowe, New York, Panama Canal, Hongkong, Singapore, Suez Canal and maybe one port in the Mediterranean Sea. Always running full speed (although lately they are going slower due to the cost of fuel) and always in a hurry. For us on the cruise ships it is always peculiar to be overtaken by a faster ship, as normally we are the ones that sail with the highest speeds. Some of the container ships average 25 to 26 knots and that we cannot keep up with.

We arrived at the pilot station at the scheduled time and then we had to wait for the pilot to show up. He had been sent over to do another job first and I think that the dispatcher forgot that he still had to cross the whole anchorage area to get from that ship to the Statendam. Still by the time that we had him on board, I had lost 20 minutes of valuable time for lowering my tender boats at the anchorage. We still arrived on time but not as early as I like to be. We run a tender service until midnight and then we want everybody back on board. The reason for that is that we never know exactly when the Panama Canal dispatcher will call us to get ready to move near the canal for getting into the convoy. We do receive a tentative schedule, and at the moment that says 0430 hrs. but is has been known to vary greatly. Now we still have some time to try and locate a missing guest if he/she is not back by midnight. If you would plan to run a tender service until 03.00 and then the Canal wants you to sail in 15 minutes, you have a problem. Once the convoy moves, we have to move regardless of who is still ashore or might be missing.

Based on the schedule given by the Panama Canal Authorities, we should be approaching the first locks at 06.30. If we do not have a slow cargo ship ahead of us, we might have a fast transit; otherwise we should be passing Cristobal around 1600 hrs. We shall see. As always, this day is “Subject to Extremely Much Change”.