In the early morning I flew from Seattle to Vancouver to join the Volendam. My first plan had been to take either the train or the bus, as it saved the company money and secondary it is the more scenic route. I was advised against this, as both options are very busy with cruise guests which increases the time at the border and that normally makes it also more complicated to explain what I am going to do on the ship, in relation to having the right visa. So I ended up on the 40 minute flight to Vancouver, courtesy of air Alaska but carried out by Horizon air with a propeller plane. I felt as if I was flying from England to Holland where we use propeller planes as well during off-peak hours. Then my plan was to take the Sky train to downtown but lack of Canadian dollars put a hold to that one. I was expecting a fee of 3 to 4 dollars, but if you use the ticket machine at the station they add a $ 5 cover charge because you use the machine. With the extra charge for using a foreign credit card that was going to make it an expensive train ride. So I paid a bit more and took the cab.

To make life easier for everybody, you go through American CBP in the Vancouver Cruise Terminal, and so did I as for this cruise I am officially classified as a Non-Revenue Cruise passenger. That means that I can work on board but am not regarded as a regular crewmember. This has to do with the fact that different visas cover different positions.  By noon time I was settled in my cabin and ready to roll. The remainder of the afternoon was spent tying the various loose ends together so I could indeed help out with the implementation of the new alarm system.

The Volendam is on a 7 day cruise run, visiting Vancouver, Juneau, Skagway, Glacier Bay and Ketchikan.  In Skagway there is a part turn-over of the guests, normally 3 to 400 who are doing a part ship, part inland vacation. So 400 go North and 400 come south from their inland trip and continue with us to Vancouver again. 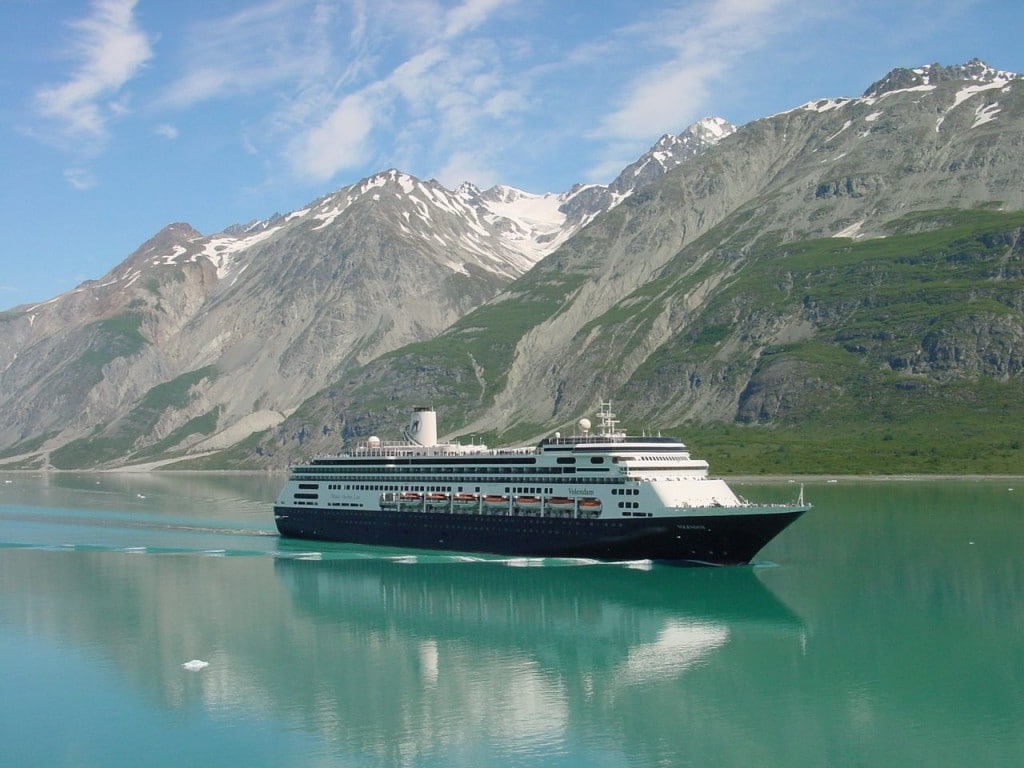 The ms Volendam III in Glacier Bay as taken from the Statendam V in the summer of 2013. Photo courtesy: Hotel Director Bert van den Macklenburgh

The Volendam was parked at Canada place West 5, nose out and that means that she was facing with the bow to the North, ready to head into the harbor without having to swing around. It makes for a quick departure but it means that it takes longer to dock on arrival, as the ship has to make the swing then.  Some ships have to dock nose out, either to hook up to shore side power, or to make it easier for the loading of stores. A 3rd reason can be that the shoreside requests it so making it easier on arrival to use two gangways for disembarkation.  There is the option, if you take the bus to the USA, that you can bypass Canadian customs. The ship comes from the States and the guests continue to the States, so by having a screened off walkway from the ship into the terminal to the Bus, you can avoid clearance. That is good service for the guests but it also saves the Canadian authorities a lot of time and paperwork, because why bother with people who are only on the way through ? As long as you can make sure they do not stray into the country while in transit, then there is no reason to spend time and money on it. This has been done now for more than 20 years and it works great for everybody. But it only works for the Coach guests as those going to the airport cannot be kept in a controlled environment and thus they have to go through Canadian customs and later through American CPB.

The Volendam departed on time for Alaska and is aiming for the early tide at Seymour Narrows, before midnight. Then she will be tomorrow partly in Queen Charlotte Sound, partly in the North pacific Ocean when it heads towards Juneau. The weather looks good with sun expected and a moderate Northerly breeze which should keep all the very low hanging clouds away.

The ship is under command of Captain James Russell-Dunford and while he was trying to find his way to Alaska, I was trying to find the Training Room on board and to get inducted in the mysteries of the art of operating a Digital Projector for my training sessions which will start tomorrow.