After a good nights sleep, and an undisturbed nights sleep on top of that; I woke up to a beautiful wind still morning. For once I was the one who could stay in bed while others, who normally have a regular working day, had to get up in the middle of the night. As today was change over day, housekeeping started collecting luggage at 10.30 pm last night. This lasted until well into the early morning when the last guests had finally put out their suitcases. Everything was directly off loaded and stored in a secure area in the terminal, ready for when the guests would start to disembark. For some guests that was really early, due to the fact that you now have to be at the airport at least two hours before the flight and from the ship it is also a 45 minute ride to the airport as well. 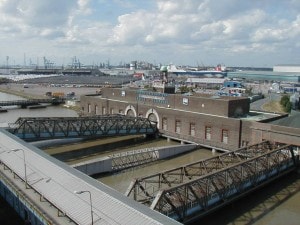 The landing stage or pontoon is connected by bridge to the terminal building on the mainland. In the distance Tilbury Docks now much in use by Ro-Ro traffic.
This London International Cruise terminal where we are docked has quite an interesting history. It was built in the late 20’s and opened in May 1930. It came about when the Passenger ships of P&O needed better berths and P&O wanted to avoid the hassle of going into the non-tidal Tilbury docks just a little bit further upstream. This meant that ships had to go through locks every time when going in and out. By building this terminal “The Tilbury passenger Landing stage” the locks could be avoided and by making the landing stage in the form of a floating pontoon, meant that there was also no tide to worry about with its height differences. The pontoon rose and sank with the ship on the tide and the gangway remained the same height at all times. It remained the main London Passenger terminal until well into the 1960s. Apart from the passengers of the P&O line, also many soldiers, sent to far flung destinations of the British Empire left from here or returned back home via this terminal.

When the empire started to crumble, this was also the place where many immigrants from the former colonies entered Great Britain for a new life, while others left. Quite will known in British history is the fact that from here many British emigrated to Australia. These were called the “Ten pound Poms” by the Aussies as that was what the passage was costing. Over a million British used this scheme to emigrate and many of them via Tilbury. The word “Pom” is an Australian description for somebody from Great Britain. A railway connected the terminal directly with the extensive railroad network of the United Kingdom. That all came to an end, when the regular liner service lost out to the airplanes and with the decline of the passenger trade, the terminal also lost its railroad connection.

A snapshot of the restored former Passenger Hall. I took this one from the official website of the London International Cruise Terminal.

After years of decline, the terminal was resurrected as the London International Cruise terminal and is currently slowly but steadily being refurbished. The restored passage hall has a dual function of dealing with cruise guests and their luggage and serving as a venue for concerts, meetings and dinners. Currently the pontoon, the actual dock, is being refurbished so that it will be sturdy enough for the cruise ships to call there well into the future. The next step will be to paint the whole area, so it looks very nice again. There are not many cruise terminals that are able to show such a history and with the increased numbers of cruise ships making change over calls in England, its future should be secured. For a cruise ship captain it has one great advantage, the port is never closed due to high winds. Gravesend and surrounding area ensure enough lee that with the help of some tugboats you can always get alongside there. Something that is not always the case with Dover and Harwich. The fact that it is a 4 hour trip up and down the river is something that I am willing to take in my stride for that.

Thus a little bit of history about Tilbury. One of the security officials in the terminal was complaining to me, that I had not written anything about Tilbury yet, so here I have corrected the omission.

I used the day to show some friends around and cleared up a mass of outstanding paperwork and outstanding audit work. Our life is nowadays in the hands of the auditors (clipboards included) and it all has to be processed and answered. I still have to make it to Gravesend on the other side of the river and see Pocahontas grave……………. One of these days.

Tomorrow will be the last day and we are supposed to sail at 1400 hrs. all depending if all the flights will make it on time. We will then be on the way to the Baltic and Russia.