The port of Torbay does not have a dock that is big enough to accommodate the Prinsendam and thus for us it is an anchorage port. It is located in a very sheltered position (from any but the South East and North Easterly winds) in the curve of a bay. As the winds in South England are predominantly North Atlantic Winds from the South West the anchorage area is excellent for use at most times. Many ships seek refuge in the bay if there is another North Atlantic tempest blowing. Apart from that, just outside the bay, still within shelter of the land, large ships can safely be in lay-up. We saw quite a few tankers at this anchorage while we approached the bay.

There are two ports in the bay. At the Southside there is the town of Brixham and in the Northern corner the town of Torbay (Torquay). Our call was today at the latter one. So I dropped the anchor in the middle of the bay and we started our tender service. Torbay has a nice marina and that is where our tenders were directed to. The double name of the town, and both being almost the same, confused me and no doubt those of you who read this as well. However the blurb (that is editor speak for an entry in a paper) in the ships daily program explained it all. There were originally two towns, Paignton and Torquay, and they merged in 1968 taking the name of Torbay. Torquay comes from the quay at the Tor. Tor comes from Torre Abbey, the Abbey located near the village of Torre. The area calls itself the English Riviera which is easy to understand. The Gulf Stream ensures moderate temperatures all year around and the sheltered bay ensures that the harsh sea winds seldom get here. A very nice and pleasant place. You don’t go to the Pub here; you “take” tea in the afternoon. 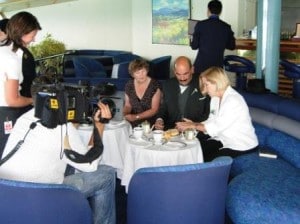 Mr. Poirot observing the tea procedure on the Prinsendam as shown by Future Cruise Consultant Tina Faulkner. The camera team from ITV zooming in on the scones. Photo courtesy: Thom Faulkner Cruise director.

The major claim to fame of Torbay is that Agatha Christie was born here and also lived here most of her life. One of her most famous creations was the detective Hercule Poirot, who solved the most complicated murder cases. A television series was made of it and the town now has a “Poirot” impersonator, a look-a-like from that TV series, helping the tourist Board to raise the profile of the town. They also brought him on board, accompanied by a film crew from the British National channel ITV. He “took” tea in the crowsnest on the Prinsendam.

While all this public relations stuff was going on, I had other things to worry about. St. Peter Port Guernsey; as things were not looking good. The weather charts indicated that the tail of a depression off Ireland would sweep over the South of England and the entrances of the English Channel and that tail would bring a lot of wind and rain. Due to the curve of the tail that wind would be from the South. Straight over the anchorage. St. Peter Port anchorage is well protected from westerly winds but not from southerly winds. 30 knots of winds with 5 to 6 feet of swell, does not work for a tender service. I was not very happy about going there and the local pilot came back with exactly the same opinion. No go for tomorrow.

The 2nd thing to consider was where this wind was coming from; from the West, from Land’s End. An area that I would have to go to as well, in order to get to our next port of call Cobh for Cork in Ireland. Not Pleasant but necessary. The only thing I could try to do was to make it as painless as possible. So the decision was, cancelling Guernsey before hand. As I now had an extra 24 hours to play with, I could use that time, to slowly sail west and have the Prinsendam ride the waves as gently as possible.

In the course of the day, the wind started to pick up until it blew about 25 knots in the afternoon. But as the land sheltered the bay, this South Westerly wind could not whip up the waves and thus the ships tenders could continue their service unhindered. Our last tender was back by 20.00 hrs. just when the wind started to die down. The silence before the storm. By midnight we had force 8 blowing. It is going to be a bumpy day tomorrow.