Note: you will see on the left that there are two entries on the same calender date and also one day with  an entry missing. Due to satellite location, (right behind our funnel) we have been out of connection with the whole world for a day (nice and quiet to a certain extent) until we could patch in to the next satelite. We should now be back in business for the rest of the voyage.

So we started our long awaited 28 day cruise to Hawaii and the South Sea Islands. The crew was buzzing as it is always nice to have a change of scenery and that buzzing was enhanced by the excitement of a 100 new crew who joined us yesterday.  They have a few busy days ahead of them, as apart from having to do their regular jobs; they also have to go through a myriad of trainings and indoctrinations to get back up to speed with the ever changing world of Holland America. When they come on board, the first thing that happens is that they have to attend a short safety briefing, followed by a boat & raft drill. Only then are they allowed to go to work. Then the next morning, today, there is an extended HESS (Health, Environmental, Safety and Security) indoctrination briefing which takes a good two hours.  This meeting starts with the Captain and the ships staff introducing themselves so all the new crew knows “who is driving the boat”. Then that is followed by training and indoctrination in the various elements of HESS. 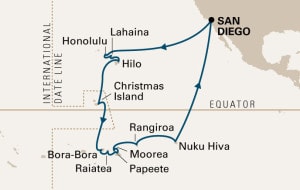 Christmas Island has been replaced with Fanning Island. Located in the North West corner of the Time/date line square.

Apart from the advising the crew about what is going on, I also had to inform our guests about the first deviation from our cruise. That went more officially by a letter in the cabin. About three days ago we were informed by our head office about the fact that the approach channel to the only port on Christmas Island had silted up. The last hurricane that had come over the island had pushed so much silt into the entrance channel that the depth had decreased enormously.

Not even enough depth for our tenders to get in and out. Maybe a skiff with an outboard engine could still do it, but not a tender laden with 80 guests which draws about 5 feet at the minimum. It means we need about 7 feet to safely sail in and out, as there is always swell and tides to contend with as well. Maybe a disappointment for some guests but we have a substitute to replace it with. Instead we are going to Fanning Island or Taburean (in the Kiribati group) which is, same as Christmas Island (Kiritiwati) part of the Line Island of groups.  We will be there at the same day, at the same time and exposed to the same weather; in other words it will be more or less the same.

This is the first of four full days crossing the North Pacific Ocean and I set up a course line that should give us the greatest advantage of the following current. In this area we have the North Equatorial Current following from East to West and that is going to give a push of at least half a knot in the back.  We are sailing the Rhumb Line course to Hawaii as it keeps us the furthest to the South. Following the Great Circle route would be 8 miles shorter, but due to the curvature of the Earth, it would bring us 90 miles higher, more to the north, than the Rhumb line.  I want to stay as far south as possible as more to the north there are the wave fields of the Alaska storms, but will make the ship move and at the same time, bring the speed down.  We might even get a little bit of those wave fields on day three, depending on how nasty the next depression is that is moving from Japan up to the Gulf of Alaska.

Thus our cruise commenced and with that the official Introduction of the ships staff, which is nowadays officially called: Captains champagne Welcome Onboard toast. We decided to go back to the old days a little bit and introduce some more officers as with 28 days of all being in the same boat our guests will meet many more officers than they normally do.  My personal highlight of that presentation was to honor a crewmember who has served Holland America for 35 years.

It is not often that officers and crew from an Indonesian background stay that long, which is an even bigger reason to be excited about it. 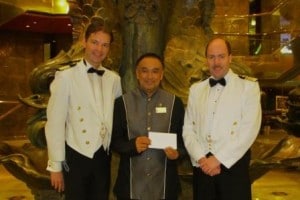 Congratulations for 35 years of dedicated and faithful service to Holland America Line.

So instead of the employee of the month, we introduced Mr. Oerip Hartoyo, 35 years employee. He started sailing in 1977 and basically has been all over the fleet. His best memories were from the old ss Rotterdam, which might not have had the most luxurious crew accommodations, but it had style and atmosphere.

Today the weather was cool and overcast, courtesy of that bad weather up in Alaska and tomorrow will be the same.  But it also means no wind, and thus very little waves and that keeps the ship from moving.