I arrived a little bit earlier than normal in Belize because my Shorex excursion manager was getting in a muddle with the tours. Not something that the guests noticed but as the tours did not always depart as planned on paper, she wanted to start a little bit earlier. As it entailed only me getting up 30 minutes earlier to help her out it was not a big thing. The rest of the officers involved in the approach were on watch anyway and the pilots get paid for the pleasure, so why not. It also helped with the arrival sequence as we had an unusual customer in the line up this time. Namely the Statendam whose Christmas cruise was different than her regular cruises and so she popped up today in Belize.

Thus with the Veendam leading the procession; we all approached Belize with about half an hour apart. It was still a windy day but for a change my prediction came out and all the rain clouds had been blown away during the night and we had a sunny day. It also gave me the chance to finally do my Crew Christmas photo that I had planned last time Santo Tomas. However, then it rained and I had to postpone it all. This time is was only windy and with everybody standing with the back to the wind it went fine. 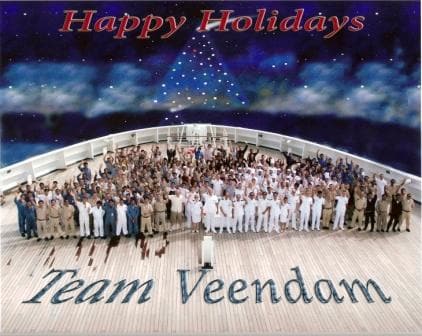 All three ships left Belize on time, now in reverse order with the Veendam being last. It is a very slow run to Costa Maya that a last departure did not really affect the schedule and the singing was not until late in the evening. Normally our next stop is Santo Tomas, but to be there on Christmas day does not work. Everybody is in church that day and there are no shops open, no tours to take and no transport present. Thus we are doing Costa Maya instead of Santo Tomas and then on the normal Costa Maya day we are for half a day in Roatan. It is still very windy East of Costa Maya, so our docking will be an interesting affair. We will be together again with the Statendam and if we have to cancel I will have the novelty of doing that for two ships. That would be first in my career.

All of us had been gearing up for the event of the cruise, the Christmas caroling by the crew. Because of the rehearsals, the singing went off without a glitch. We even managed not to burn anybody with our candles. The singing is most of the time not a problem, although the word “singing” might be open to interpretation here, it is to get everybody and all on the stage. However under the guidance of the Cruise Director and with a bit of input from my side, we all marched from the right direction to the right location and sang the right songs at the right moment. I estimated that there were about 500 guests attending and that is for a 23.00 hrs appearance not too bad. Afterwards we had a get- to-gether with drinks and snacks. To stay in the festive season four of our officers got engaged. A second engineer to a cast member and the 3rd navigation officer to the 3rd engineer. Happy peoples all around.