We have seven days to go so next Friday we will leave the yard and go around the outlying marshes to Venice. There is a small channel that runs from Marghera /Mestre to Venice but it is much too small for a large cruise ship. When in are in Mestre you can take a Vaporetto (water taxi) to Venice and back and then you get of course the Scenic tour when sailing into Venice but for the rest these channels are mainly used for barges to transport cargo.  So we have a 2 hrs. sail (slow speed) from the Shipyard to dock to open sea and back in again to the Cruise Terminal. 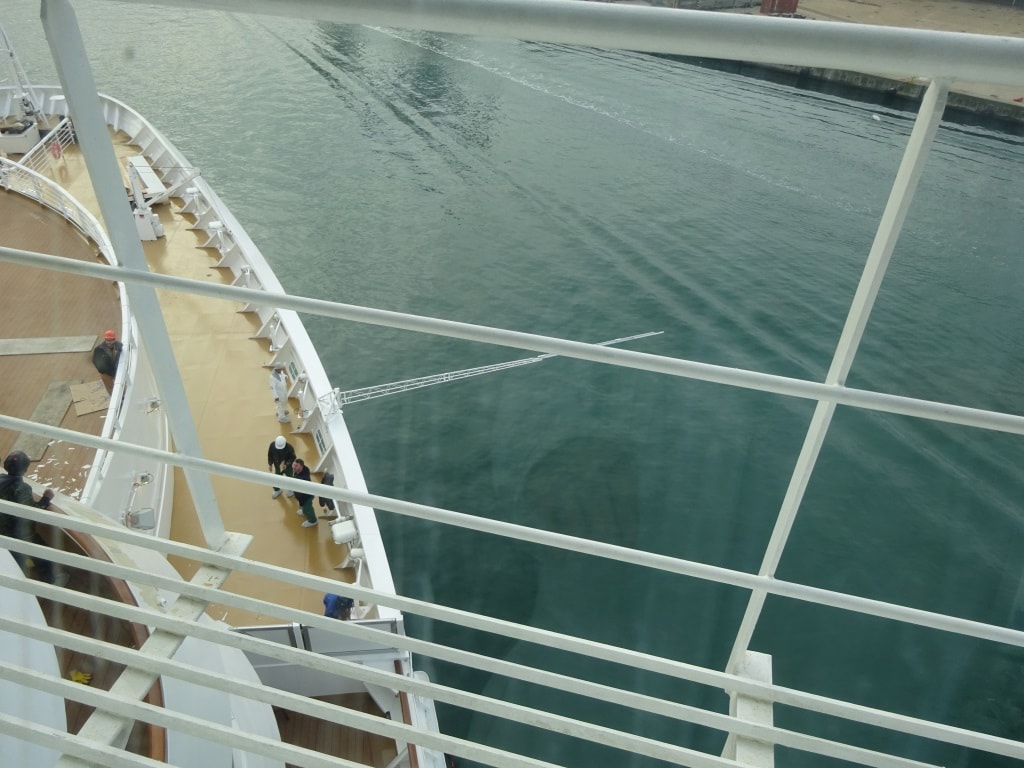 This morning the yard was testing the bottle throwing device. I assume for the dedication in February as they won’t have much time left to fine tune as the angle must be exactly right otherwise the bottle will not break and that would bring bad luck.

This morning we had a full drill again, as we are getting ready for the official drill tomorrow morning, which will be viewed by Lloyd’s Register Inspectors to see if we are proficient in everything so they can give the ship her passport. This passport is a certificate called the PSSC or Passenger Ship Safety Certificate. This is the main piece of paper that gives the right to sail. If that one has been issued then all the other certificates fall into place. Next important one is our Bare Boat charter certificate, which is issued by the Flag State and it is basically saying who the owner is and that the captain is allowed to play with the ship. It is called a charter as an operating company charters it from the owning company. This is nowadays the standard way the ships business is organized. In a sort of similar way as shore side when you lease a car. You get the whole car and you can do with it what you want but you do not own it directly. 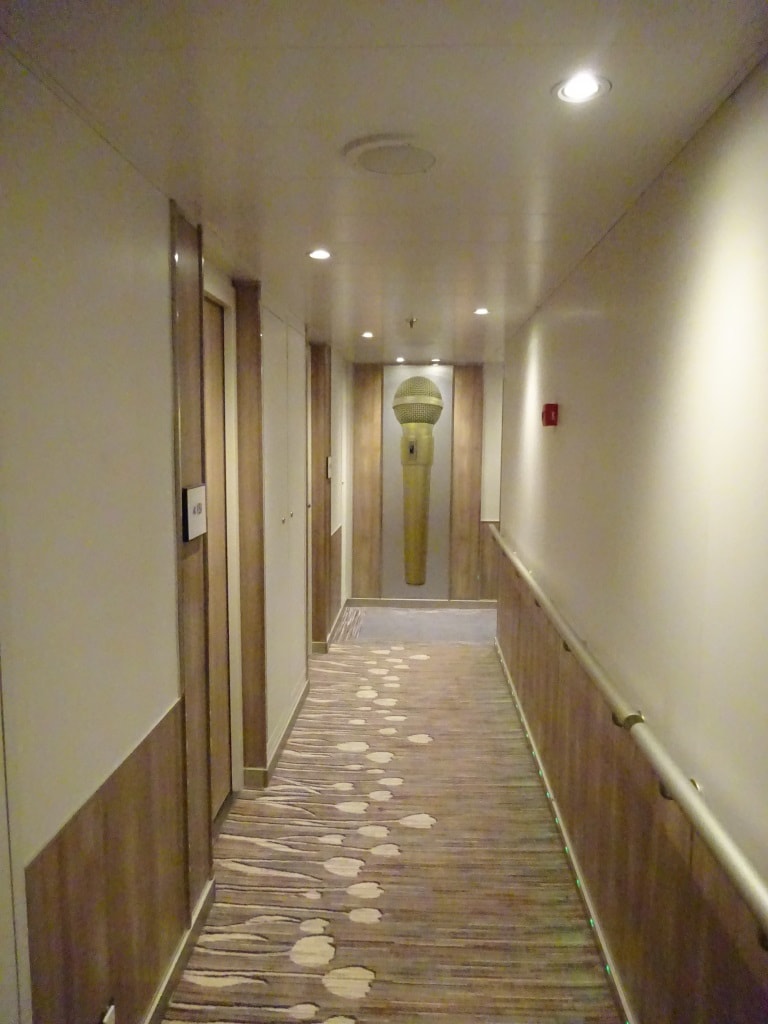 The art in the corridors is very similar to the Koningsdam. Enlarged photos of Musical instruments such as microphones, tape decks, amplifiers etc.

Having a “Bare Boat” means that the company which charters it can put their own crew on board. So the owner of the ship (which in this case we are ourselves but legally under another company name) does officially not provide the crew. For larger companies that is the normal way of doing as it stays in house but there are two entities involved. But you find in the cruise industry, mainly in the 3 star segments, other charter options. Whereby a shore side travel agency charters a ship from totally different entity and then put the guests on it who have booked through that agency. A good example is Cruise and Maritime Voyages which mainly operates in the United Kingdom. The owner provides the ship and quite often also the Deck and Engine crew and then the Hotel department is another entity which is hired to make the cruise ship crew complete. Then the Travel Agency designs the cruises, sells them and puts the clients on board. This can work very well but it can also have its challenges as all these different groups have their own focus points and their own bottom line to look at. So all the big companies who operate in the four, five and six star segment have everything in house. 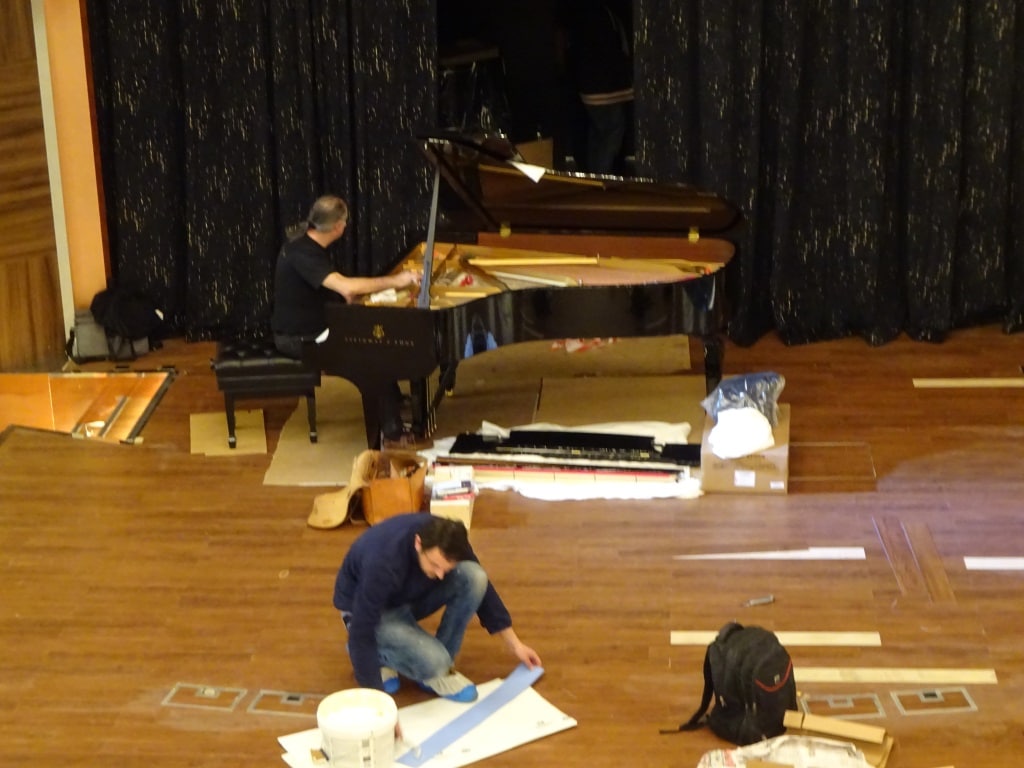 The Piano Tuner happily tinkling away while around him the yard is finishing up and also touching up.

We can really see that we are now getting to the last finishing touches. The shops staff are stocking their the Shops located around the upper level of the Queens Lounge, housekeeping is fitting out the Suites (the coffee machines went in today), the yard is bringing in more and more chairs into the lounges and the piano tuner arrived. Now this is a typical Cruise Ship Life thing and a service you will not find on any other sort of ship. So the Steinway was placed on the stage and the piano tuner was tinkling away. It will take him quite some time to get it right as the piano has been in a big crate for a while and it has traveled from the factory to the ship through all sorts of weather and temperature conditions. One Board the temperature does not fluctuate that much and then the weekly visit take a lot less time. In mean time the yard kept doing “yard things” around him. 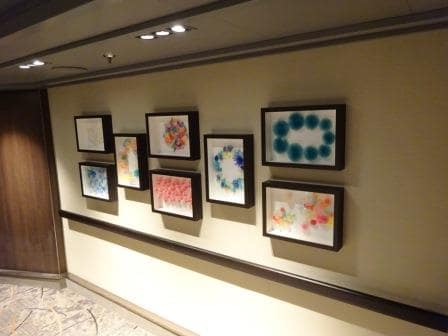 We have quite a few Diorama boxes hanging in the ship. Full of whimsical things of which we do not really know what it is or is supposed to be. 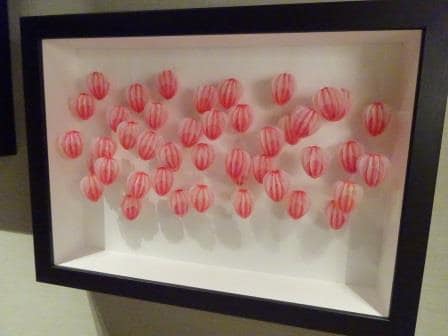 But that does not mean that it is not very nice.

With all the protective paper, bubble wrap and carton coming down, more and more artwork is revealed so another sample of what the guests can see when they walk around. Suspense is building though as there are still a few pedestals empty.

Weather for tomorrow, it is getting warmer again with some showers during the night time and dry weather in the afternoon.

What it is I do not know but it is quite nice.