Well the amount of wind amounted was less than the weather guru’s had predicted and the good ship Volendam arrived without any hassle at 05.30 at the pilot station. Some ships have a dedicated pilot break but on cruise ships there are always several breaks (that is what we call the shell doors in the hull side that can be used as they are on the lowest deck).  For the Volendam that is A deck as B deck is below the water line and Main deck is passenger accommodation. There we have the Tender break, the Water break, the Bunker break, the Marshalling area (2 doors), the Provision break, and another Water break. So plenty of choice but we normally use the Marshalling area, there were we load the suitcases and store the spare parts coming on board, as this break has the most space. And it is exactly amidships, so it has a flat hull and no bow wave playing around it.

In discussion with the pilot the side of the ship is selected that gives the best leeway for the pilot boat to come along side and then the ship reduces speed to what the pilot wants and the pilot boat can do. Most of the time that is somewhere between 6 and 10 knots. Although faster is possible and if you have the pilots of Messina, they comes alongside at full sea speed. Which can be 18 or 20 knots. Most pilots in the rest of the world think that is crazy but it really is not, as with 18 knots the water flow around the ship is very steady and that makes it very easy to keep a pilot boat in a stable position for the transfer. The rest of the world has not grasped that yet and thus we have to go down to 10 knots or less. 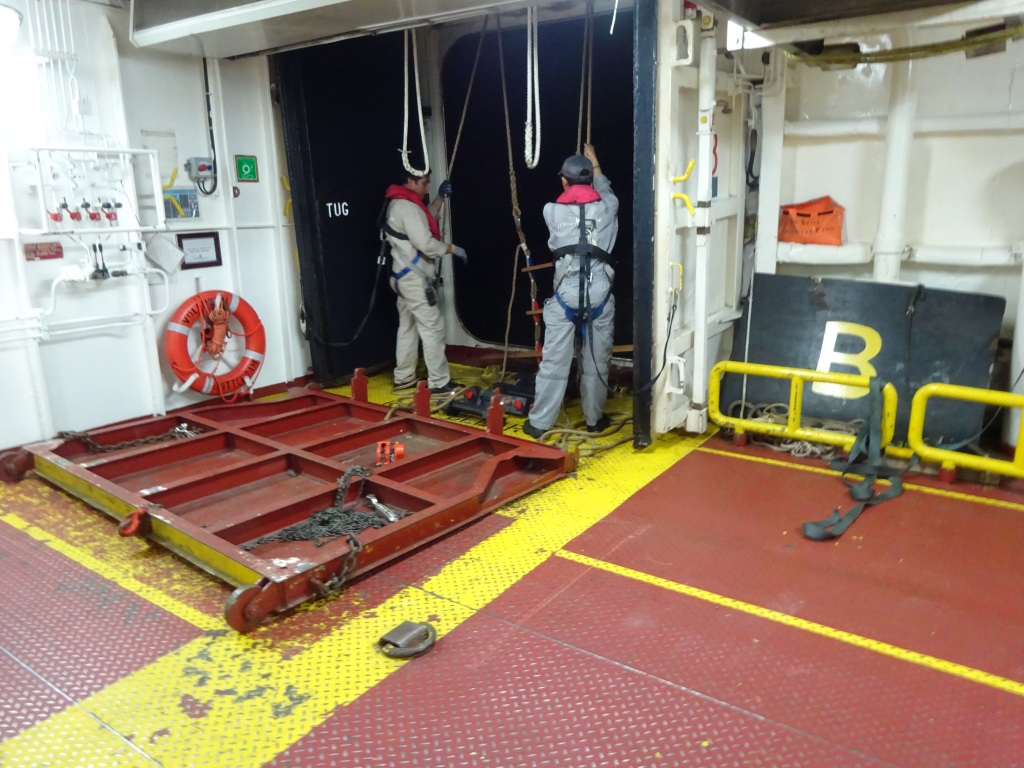 Opening the Pilot Break and rigging the ladder.

The lowest speed I have seen while sailing with was one knot drifting. This was long ago in Acapulco where the engine of the pilot boat had given out and thus the pilot decided to come alongside in a Canadian style Canoe. His two sons were paddling and he sat in the middle as a sort of contemplative Buddha while his little daughter was waving a big Mexican flag to attract attention. I am still mad at myself that I forgot to take a photo as it was really surreal. Pilotage in Acapulco is compulsory and thus he came on board. His standard phrase was: Captain if you go here and then there and then go astern and then stop in time, then you will be in good shape. Is there any fresh coffee???   We love those pilots as we are not cargo ship captains. We are in and out of port everyday so we know the local scene and know what to do. Cruise ships spend 80% of their time in port; cargo ships spend 80% of their time at sea. So there a slight difference in comfort zone, when we go into port. 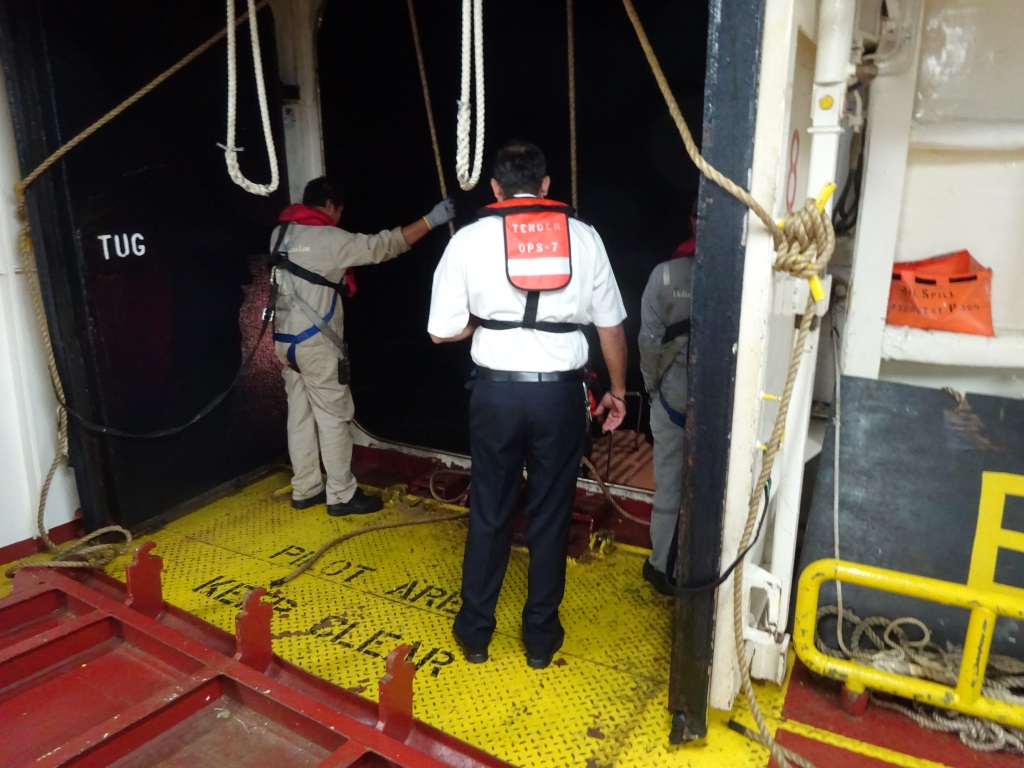 The security officer observing the pilot boat coming alongside.

The pilot boat in Boca Chica can do about 10 knots and that is the speed we then make. Going into the bay is done with a speed of 12 knots to avoid too much squat and thus this is a happy speed for us. The break doors (two halves) of the forward Marshalling area are opened by two Lsa’s (Lifesaving Attendants, who also have the responsibility for maintaining all the shell doors of the ship. They are strapped in in Safety harnesses so they cannot fall in the water when they rig up the pilot ladder.

The pilot ladder is a special ladder (With a certificate) which can only be used for one purpose: the transfer of the pilot. We have one such ladder on portside, one on starboard side and one new one spare. Enormously important as the pilots life can depend on the quality of the ladder and fatal accidents have taking place in the past. 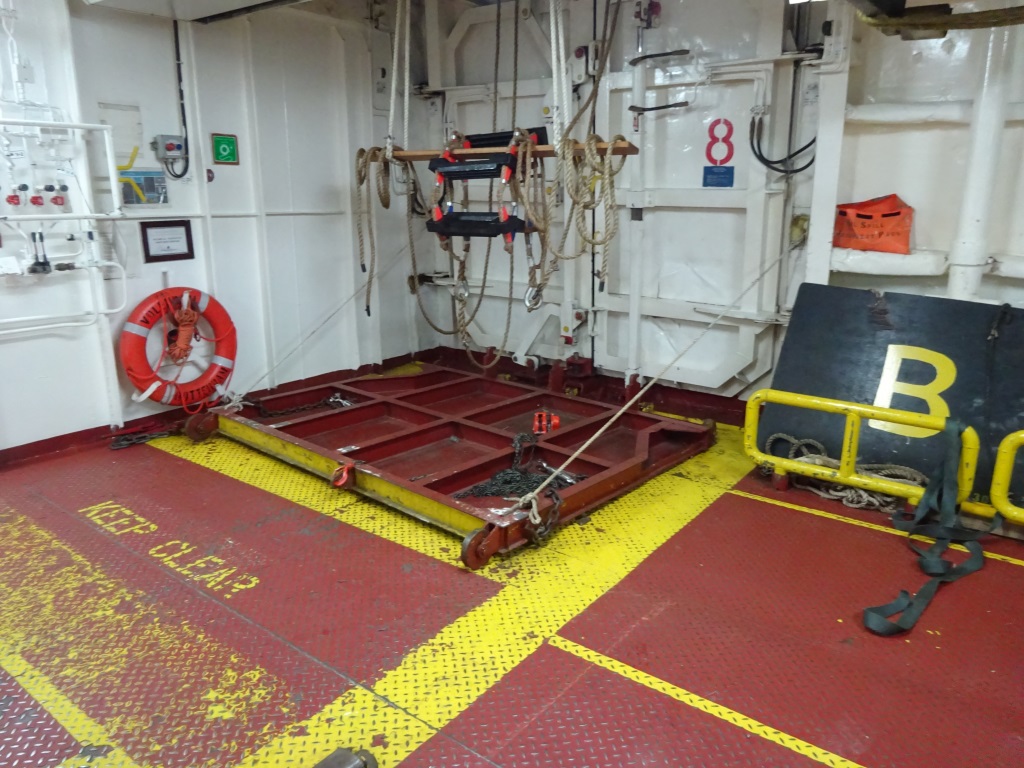 The door safety closed again. The pilot ladder is hanging in a rope cradle so it does not get damaged while not in use.

Once the door is open and the ladder rigged, the pilot steps on board and is then received by the Security Officer who checks his/her ID card and arranges an escort to the bridge. Then the door gets closed and the bridge advised if they have “green light” on the safety panel, as each opening in the ship’s hull  (in the blue part) has a sensor to ensure the door is safely closed and secure against seawater or unwelcome visitors.

The Cartagena pilot normally does not “conn” the ship into port. The officers sail the ship. He does monitor the progress and the turns and twists and advises the captain about any local issues or last minute changes. Changes or things that have changed since the last visit.

We had a nice overcast day in Cartagena, excellent for sightseeing and by 08.00 most of the ship was empty. That gave me the chance to conduct a drill, which was a combination of fire and collision and everybody had to go to town, to follow the protocols and save the ship from sinking.

We sailed just after 13.00 hrs. and are scheduled for a 05.00 Cristobal pilot at the Atlantic side of the Panama Canal. Weather: overcast with a chance of showers. 89oF /29oC and moderate winds. Not the best forecast we could have……………….. but sometimes they are wrong.