After four days of seeing only blue water we had land again today. The Cape Verdes are basically two groups of islands lying about 300 miles off the African coast. So after our call here, there will be another day at sea before we will reach the African Continent. There are several ports that can be visited in the Cape Verdes and on our schedule today was Mindalo which is located on the island of Sao Vicente. This is the 2nd island of the most northerly group when coming from the West.  The first island is Antao and by 05.00 hrs we were sailing under its coast on the way to the pilot station of Mindalo. The town lies on the North East side of a large bay which is facing west. The North East side being chosen to be out of the strong winds that can blow here. There are two main docks, some smaller ones and a large anchorage area. The whole area together is called the Grand Port. The place was of great prominence in the past, as a coaling station for steamships on Atlantic crossings or on the way down to the Cape Town area. Now it still acts as a fueling station for ships but it is of less prominence than it was in the old days. 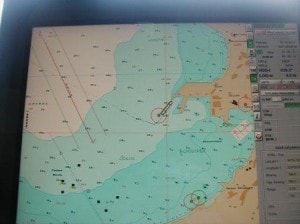 Tight turn around the end of the breakwater dock, to stay away from the “green bits”.

My worry was the wind and the need to have very little of it, as I had to angle around the dock to get in. A wide swing would bring us too close to the shallows. While in the open, there was a wind force 5 to 7 blowing but in the lee of the mountains it was only 3 to maybe 4. Good enough to do the approach maneuver without the fear of being blown away. By 06.30 we were in position to receive the pilot who came out in a contraption of over 30 years old. This made it necessary for me to completely stop the ship so the boat could come alongside. When asking the pilot about the wind, the answer was “there is only a little bit”. So we all wondered what he considered a lot of wind then. We were to find out on departure. 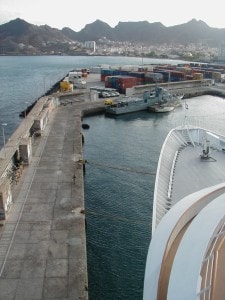 The port of Mindalo, in the shelter of the mountain range and part of the port in the foreground.

Thus we docked with “little wind” but I needed all my concentration as the wind veered from the portside to the starboard side, causing the bow to be pushed to the dock and then off the dock etc.  At the same time the linesmen started to move the fenders along the pier under the loud directions of the pilot. So when I thought I knew where to come alongside, I had to lift off again and reposition.

Also in the Cape Verdes there is never a dull moment. 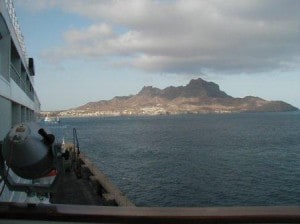 The other side of the large bay that forms part of the harbour. The rock formation is called the Face.  Or informally the sleeping man, as it resembles a man laying on his back, with his hands folded over his belly.

However the guests had a good day and we all could admire the stark beauty of this barren place. In some area’s there was some greenery visible but it was only sporadic. Severe draughts, in the last few years had reduced whatever greenery there was to the absolute minimum.

Our departure was scheduled for 17.00 hrs and by that time it was blowing wind force 7 to 8. I call that a lot of wind but the pilot again insisted that it was not,”that much”.  Well if that is the way they think, then I know what to do here, if we call again and they advise me that there is a “lot of wind” in the harbor.  Cruise ships are not regulars here and I think that our pilot did not exactly understand how much wind we can catch with all the balconies.

Still for departure this wind as not so much of a problem as it would have been with arrival. What helped me was that the wind was now blowing straight onto the bow and was no longer veering from port to starboard and back. Thus I could let the Prinsendam drift astern until the bow was just clear of the pier and then swing the ship around with all power available and get clear of dock and shallows before the wind could get hold of the side of the ship and cause it to start drifting.

Sail away was very scenic, and with our travel guru Frank giving the appropriate commentary we sailed around the NW side of the island of Sao Vicente and headed east back into the North Atlantic Ocean. We should have a little bit more wind than yesterday as soon as we clear the last Cape Verdes islands around midnight, but for the rest, it should be a good ride.