Puerto Quetzal is a fair distance away from Corinto so we put the pedal to the metal once clear of the shallows of Corinto. Luckily we found a nice bit of current that pushed us in the right direction and so during the night the bridge could easy off on the engines and still arrive nicely on time at the pilot station. Puerto Quetzal is the main entry port for Guatemala on the Pacific side and a very busy port. Apart from the cruise terminal, there are two tanker berths and four berths for large cargo ships (and of course more if there are small ships). When we arrived, all the cargo docks were full and only the 2 tanker berths and the cruise terminal were still empty. The two tanker berths are close to the cruise terminal and thus I did not mind it at all if they were no tankers there. Less traffic going past the ship and as one berth is opposite the cruise terminal, more space for me if that dock is empty. Today we docked starboard side alongside on request of the 2nd officer training. He had scheduled a boat drill for the portside and wanted portside boats in the water. Who am I to refuse? Quetzal is a very nice sheltered port and a great place to lower the boats. Tomorrow we are in Puerto Chiapas and then we will do the Starboard side boats.

We are now nearing the rainy season of this area and we see changes to the weather around us. It does not affect the guests very much but we on the bridge see the tentative signs. The wind is not coming from the standard –same- direction anymore but fluctuates in direction and force. An indication that there are little frontal systems in the area; normally recognized as thunderstorms and clouds. The normal wind is a land wind which starts to blow around 11 am under the influence of the warming up of the land. It dies down again in late afternoon with the sun moving to the West. Now we see more wind towards the land and less strong on average but much more unpredictable. It goes the same way for the swell. Of course the swell is caused by wind that has ceased to blow and rolls in quite often from far away but with the regular wind blowing off the land it tends to “smooth” out the waves a bit. Now this wind is missing and the waves are coming in un-hindered. We saw it yesterday in Corinto, where we call both times at the change of the season and today in Puerto Quetzal as well.

This was the first time this season that I observed a significant swell here. Luckily also here the breakwater has been designed to stop the general direction of this long rolling swell affecting the ships inside the port. It works wonderfully well but it requires making two sharp turns towards the cruise terminal for a cruise ship, when going sb side alongside. If you dock portside, it requires an 180o curve around the inner breakwater and then go astern to the dock. I blogged about that maneuver once in the past. Today it was starboard in and when given the chance, I try to do the whole maneuver with the rudders only. With a highly maneuverable ship such as the Statendam with its Becker rudders it is not so difficult. However it fascinates the pilot to a great extent. With the regular cargo ships he normally takes in and out, it just means pushing and shoving with two tugboats until the cargo ship is where he wants it. Cargo ships do not tend to steer that well at slow speeds, hence a lot of pushing and shoving is needed to get them around the corner. 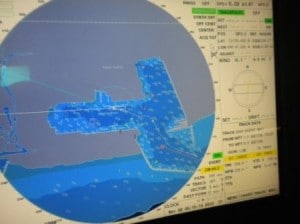 Now he can watch a cruise ship graciously gliding in, exactly on the track line, and making a large and fast course change with just the gentlest of rudder orders. While docked we had the wind blowing from all directions but luckily it still followed the regular pattern and by 17.30 it had died down to about 7 knots. It made our departure an easy happening. Wind makes us drift and for drifting there is no room in the harbor.

By 17.30 we were on our way again to the North, to Puerto Chiapas. Mexico is one hour ahead of Guatemala and thus we are going one hour forward tonight. I will be on the bridge by 0600 hrs. to start studying the swell and the breakers ashore, to see if we can get inside . If the swell is under the wrong angle and runs into the harbor entrance, then we have a problem. We are arriving on nearly low water and the swell going high up and then down low will reduce the entrance depth too shallow for the ship to get in safely. Based on Corinto yesterday and Puerto Quetzal today, I am a bit worried about tomorrow morning. But such is a Captains life.

Note from a previous blog: a lampoonist, is a crewmember whose main duty it is to ensure that all the lights are working on board. Hence the word: lamp-po-nist.