It is only a short hop from Ashdod to Haifa but it is stretched a bit as we have to first sail away from the coast until we come to the recommended track that leads along the coast. Then when approaching Haifa you have to angle back the same way towards the entrance of the port. Still the distance can be covered in a few hours and thus we sailed from Ashdod at 23.00 hrs by 04.30 we were approaching the port entrance of Haifa as we had been requested to be there at 05.30 because of port congestion. Due to some amazing coincidence of scheduling all ships going in and out had decided to do that during the window of 05.00 to 06.00 that did not work of course and gave the pilots a nice headache. The first cruise ship scheduled the Arion (built in 1965 for Yugoslavia and now sailing for Classical cruises) made it in as scheduled at 05.00 The plan was then to get two container ships out in the next 30 minutes. This was to be followed with us sailing in at 05.30 and after us at 06.00 would be the Golden Irish (ex Cunard Princess). To make it a real cruise port; docked already for an overnight were the Thomson Celebration (ex Noordam III of HAL built in 1984) and the Royal Iris (ex Eagle of Southern Ferries built in 1971). 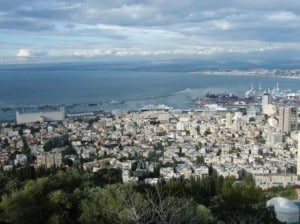 Overview of Haifa Port from Mount Carmel with the Prinsendam in the center berth. Courtesy of the Shorex Team.

Things were too nicely planned to work out of course and thus it did not work, but this time for a quite an unusual reason. They could not get the captain out of bed from one of these two outbound containerships. I have never come across that in my whole career at sea. Missing pilots, port controls not answering or linesmen showing up too late, Yes. Cruise ships waiting for tours to return or fuel bunkering not completed on time, all sorts of reasons; Yes, but this was a new one. Normally a captain is pacing the bridge as soon as cargo operations are almost finished, as time is money and especially container ships always have tight schedules. Obviously not for this captain as he was still in bed, while the ship was ready to sail and the tugboats already in position. The pilots kept calling and the officer on the bridge kept replying that he was still trying to get him out. In the end we had to wait another 40 minutes before the ship was out of our way. Basically we now had the pilot onboard at the time that I had scheduled in the first place. It was more of a problem for the Golden Iris behind us, who had to be in port early as Haifa is the terminus of their cruise. The pilot was as Jewish as could be. A spitting image of the milkman Tevye (Topol) from the musical Fiddler on the Roof; and having the last name of Shalom. 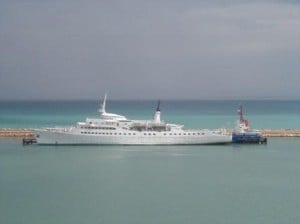 Still looking as a graceful white swan but laid up with an uncertain future. The Helgoland of 1962.

It is not more than 1.5 miles from the pilot station to the dock, so I we were still happily alongside by 07.00 I was quite surprised to see a small passengership laid up near the breakwater opposite. I had lost track of that ship awhile ago and now suddenly found it laid up here. It was the Helgoland II of 1962. She was built in 1962 for the service from Cuxhaven on the river Elbe to Helgoland, one of the islands off the North German coast. After an eventful career she was sold in 2005 to a Dutch investment firm and renamed in Supperclub cruise 2, with the idea to employ her as a party vessel. She was sent to Turkey for conversion in 2007 and then disappeared from the limelight. Unfortunately nobody in the port knew, if any, what the plans were for the ship. However somebody had been doing some painting recently so there has to be an active owner somewhere. I had hoped to go ashore in Haifa, to visit the Maritime Museum here. They seem to have a very interesting display about the illegal (passenger) ships landing emigrants just after the 2nd world war. However it is the Sabbath today and the museum is closed, which means I will have to wait until next time.

It turned out for the better anyway as during the day we had a torrential downpour. Mainly in the port as the tours did not see much of it. Just at lunch time it came down as if somebody was emptying out a full and very large bucket of water in one go. However it made my chief officer very happy. Ever since the crossing around March 18, we have not had any rain and the sand of the Gambia, Dakar and Egypt was still clinging to the ship and could hardly be cleaned off by the sailors. Now Mother Nature fixed that in 20 minutes. Afterwards the skies cleared and the sun poked through again. For the coming days it is supposed to be dry and sunny again. We are staying here until 23.00 hrs and tomorrow we have a restful day at sea. I think the guests will be ready for it, after 4 intensive days in Egypt and Israel.