This morning we sailed through Queen Charlotte Sound and also here the turmoil had died down. When the weather is bad this area can be even worse than Alaska due to the fact that the storm gets sort of locked in. QCS is fairly open but with the Queen Charlotte Islands to the West and the Canadian mainland to the East any sort of bad weather coming from the West is pushed in there. Coming closer to the American border the open area gets less and the storm has to push itself back through to open waters again. Thus the wind can nicely build up the swell and as the Queen Charlotte Sound is shallow at the North side, the swell can really become high as the water has nowhere else to go. In the winter time this can be a very dangerous place to be.

To avoid that most of the ships take the Inside Passage all the way to Prince Rupert. In our case that was not needed and also it was not as simple as with the current schedule we would have to go through Grenville Channel in the dark and the pilots prefer not to do that. The channel is fairly small and you do not want to bump into trees at night. During daylight you can see them and do something about them in time. Which means most of the time, slowing down and gently pushing them aside with the bow. Also for me there is no reason to go there as the guests are all in bed and in the dark you do not see anything.

So I always hope that I can do some sightseeing in the afternoon. After we have picked up the pilot at Pine Island 14 days ago that all went awry as the white clouds came down to the water line but this time I had high hopes. The bad weather had blown everything away and kept the temperatures down and thus very little chance of clouds developing on the water. Dusk was at 19.30 and thus we had the option to sail past Alert Bay. As we had time to kill for Seymour Narrows the pilots enjoyed the idea as well and off we went.

It was nice and dry until sunset and that helped with having a good view of the area. Even the sun poked its head out a little bit. All was well in the world for a great final afternoon at sea. This whole area here is shaded by Vancouver Island from the South and the towns are all in the lee of the islands so the north side takes all the wind. Only funnel winds coming out of Johnstone Strait can spoil the fun, but they normally loose velocity here as the distance between the mountain ranges gets wider and wider.

So instead of going the direct route north of Malcom Island, you go to the south side. This route is only three miles longer and if you have the time it does not matter to go the extra mile, and having to slow down (no wake) to let the people see something nice. It is a very scenic portion of the Inside Passage, starting with the lighthouse on Pulteney Point, followed by the village of Sointula. People who live here are mainly from Finnish Decent. When I stopped there as a 3rd officer in the 80’s with a tender to conduct a Medi-vac, I was pleasantly surprised to be suddenly surrounded by a whole gaggle of blond and blue eyed girls. Unfortunately they were chaperoned by a lot of very tall strong blond and blue eyed men. But they had never seen a Dutchman in close up so I provided the entertainment for the day. 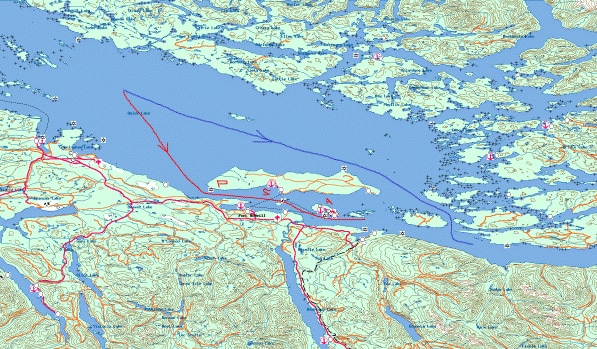 The blue line is the route we take when we are in a hurry or when there is no visibility. The Red line we take if we have time on our hands. It is three miles longer but also takes much more time as we have to go slow when passing Alert Bay.  The red letters: P = ligthouseat  Pulteney Point & S = Sointula both on Malcom Island,  A = Alert Bay on Comorrant Island.

Alert Bay is of course well-known for the tallest totem pole in the world and luckily it was still there when we came by. I had heard rumors that it was going to be taken down to have it built higher up as another town was also going to erect the tallest totem pole in the world but the pole was still on location. Our trumpeter was not on location. Maybe because we were coming by at 18.00 hrs. and that is of course cocktail time. Normally, if he sees a cruise ship appearing he comes out to serenade, trying to stand up and play in a fast moving speed boat. As that does not always go well, he brings a lot of entertainment to the ship. On the back of his boat is a sign with his website and some people who ordered the CD, said the music was very pleasant…………. when played on steady ground.
Tonight at 1 am. we are going through the slack tide at Seymour Narrows and then by 7.30 we should be docked at Vancouver – Canada Place. It has been an eventful cruise this time and the weather, apart from the Gulf of Alaska, which was much nicer than expected, has not been very good. Vancouver will join in with the final misery; Rain and squalls all day.