We are on day 3 of our crossing and the good weather is holding. There was a small increase in the “wobbliness” of the ship as we are facing a longer swell than yesterday. Still from the North West and hence on that 45o angle on the bow so that makes the ship move a little bit in both directions. Not much but just enough to feel that we are on a ship.  The only way you can really see it, is to find a vantage point higher up near the bridge and then look aft. Then you can see that the ships movement is made up of several components.  The ship goes up and down, it goes left and right, and sometimes it makes a small circular motion.

As you can see from the surf chart below, the very nasty storm to the north has developed some sort of tail and the 14 feet swell height boundary is now just touching the area we sail in and that gives a bit more movement. And nothing we can do about it as this sort of tail is hard to predict and thus the Captain cannot just start sailing south on the off chance that it might happen. But we still have wonderful weather so why should he? 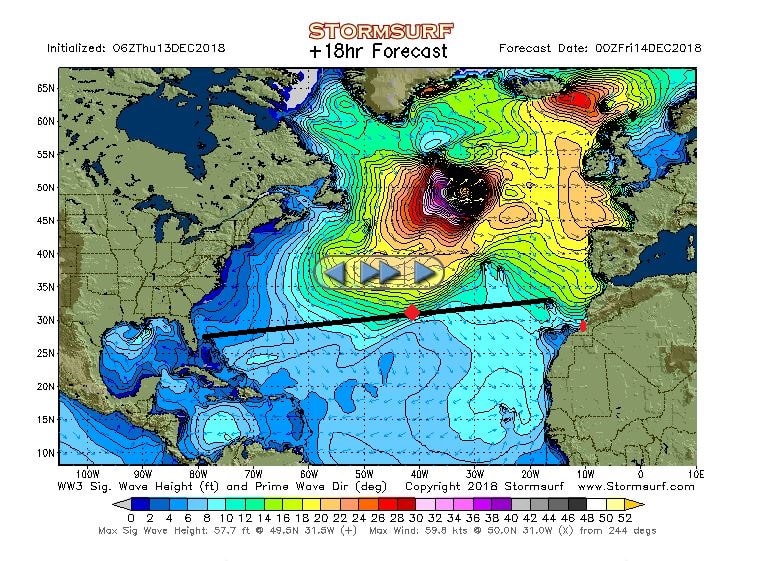 The North Atlantic Wave fields as expected around midnight. We are just on the edge and as it is a large area the boundary is not clearly set. Further up north is not a place to be with a ship. In the good old days when these weather charts where not out there, the Trans Atlantic Liners just ploughed through with scant regard for the “happiness” of those on board. (Diagram courtesy www.stormsurf.com)

Yesterday’s story about weight and buoyancy brings us to the next item: How big is the ship? Also about this topic there is a lot of confusion, especially when it comes to the word tonnage. Passenger ships are rated in tonnage and a lot of people think that the number given is the weight of the ship. It is not.

All these tonnages can cause confusion but a ship is measured in different ways to figure out various volumes and real weights as that has consequences for taxes or licenses or other regulatory requirements. Calculating these various tonnages is highly complicated so I will describe it a general way and might skirt the corners of the exact rulings a little bit to make it understandable.

When we talk about the size of a cruise ship, we mean the GRT, for the Nieuw Statendam that is 99,836 tons, so just under the 100,000. A measurement that is important for Venice as they have a cap on cruise ships over the 100,000. Thus Venice uses this measurement for their regulatory requirement. Gross Tonnage refers to all the enclosed spaces on board. This gives the strange situation that when we open the Magrodome, then this tonnage would change as the whole Lido Deck is now open to the outside. But the rules have foreseen this and ships with Magrodome are calculated with the Dome closed. 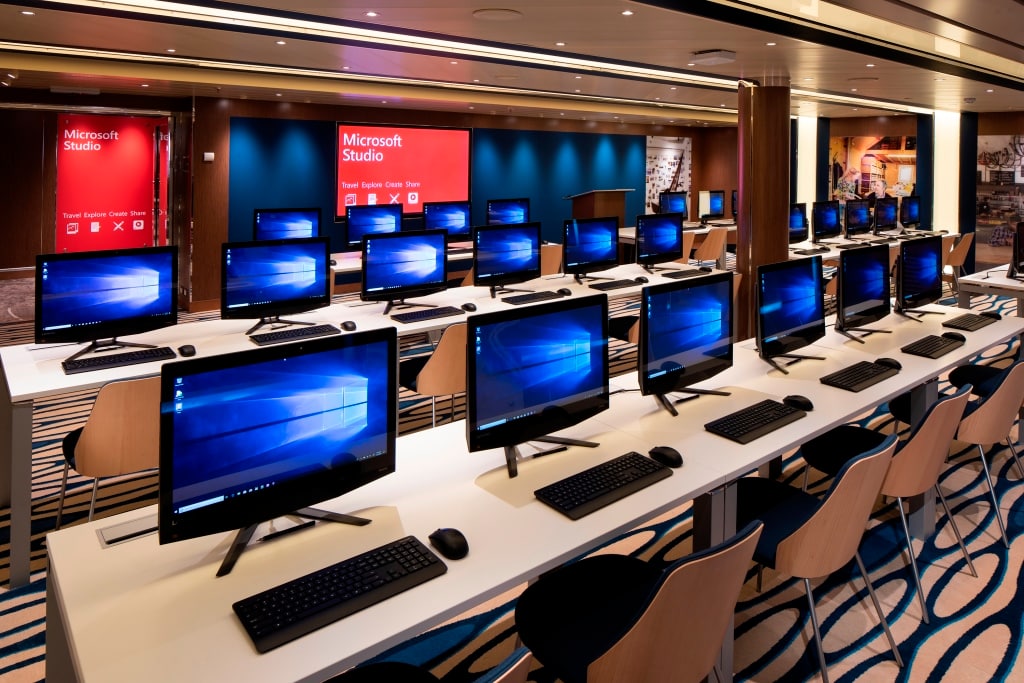 This is the Microsoft Workshop. In use for our cargo so part of the NRT. (Photo Courtesy Holland America Line)

Then the NRT or Netto tonnage. This is a calculation of all the cargo spaces on board. A cruise ship is not a cargo ship but our public areas generate revenue as “our cargo” enjoys themselves there. So roughly 2/3 of our ships volume is given over to our guests and anything in relation to that. The figure is derived at by subtracting all non cargo spaces (such as engine spaces, kitchens etc.) from the GRT.

Then we have DWT or Dead weight: this is what we carry as weight with us, such as oil, water, stores and supplies and also the weight of our guests and crew. As every person on board can have a different weight, an average of 75 kg. is used. 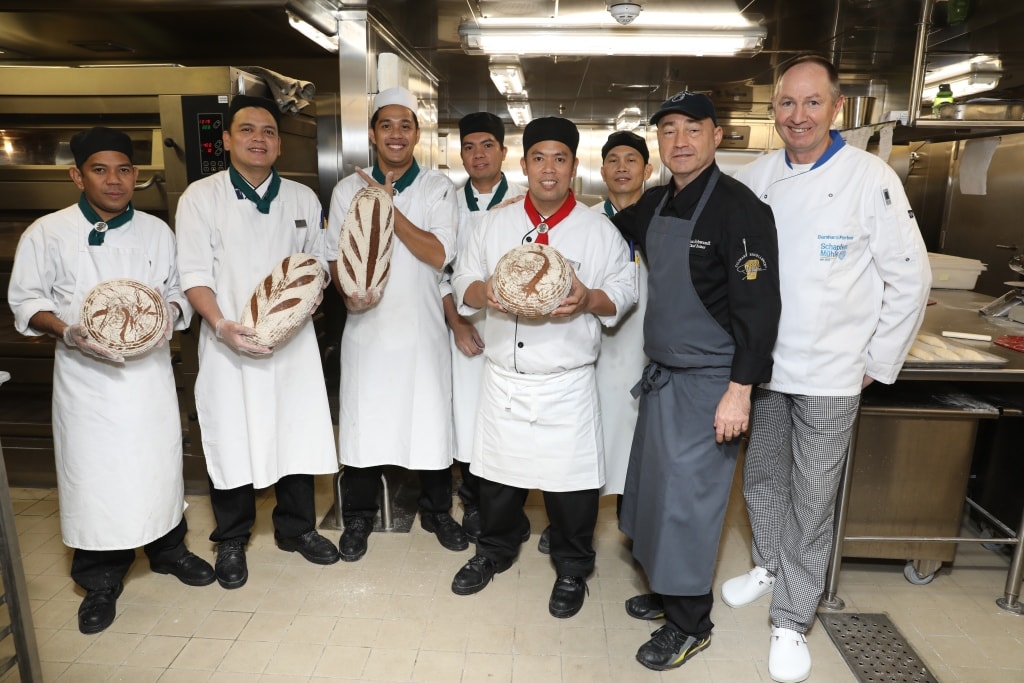 This the Bakery with the bakery team and two corporate trainers. Although the  guests enjoy the results of their labors, the bakery is not a cargo space and is thus part of the volume derived at when you subtract the NRT from the GRT. (Photo courtesy Holland America Line)

And then there is the displacement and that is the actual weight of the ship. This is always given in relation to a draught or draft. Why, because the ships weight pushes water away and seawater weighs more per ton than fresh water and brackish water is different again. Design draughts for a ship also vary as the ship sinks in less in seawater (seawater has more buoyancy) than fresh water and safety requirements might describe a different maximum draft in the summer as in the winter. (As we saw yesterday if ice would settle on a ship it would increase the weight and thus the draft)

I think this rather strange bulge in the tail of this nasty storm is caused by its intensity as it has black and white colors on the diagram. The wave heights are around 50 feet or more, caused by 60 knots of wind and all that energy has to go somewhere. Because of it, the weather is expected to change a little bit. The wind direction will follow this edge of the storm and will turn to the north and we might get the rainy tail of it all and thus some rain could fall. Not good for our guests who have been sitting in the sunshine in the past few days, but it will make the Bo ‘sun happy as it is an ideal help with getting the salt off the decks. We might have to keep the Magrodome closed tomorrow and increase our tonnage. 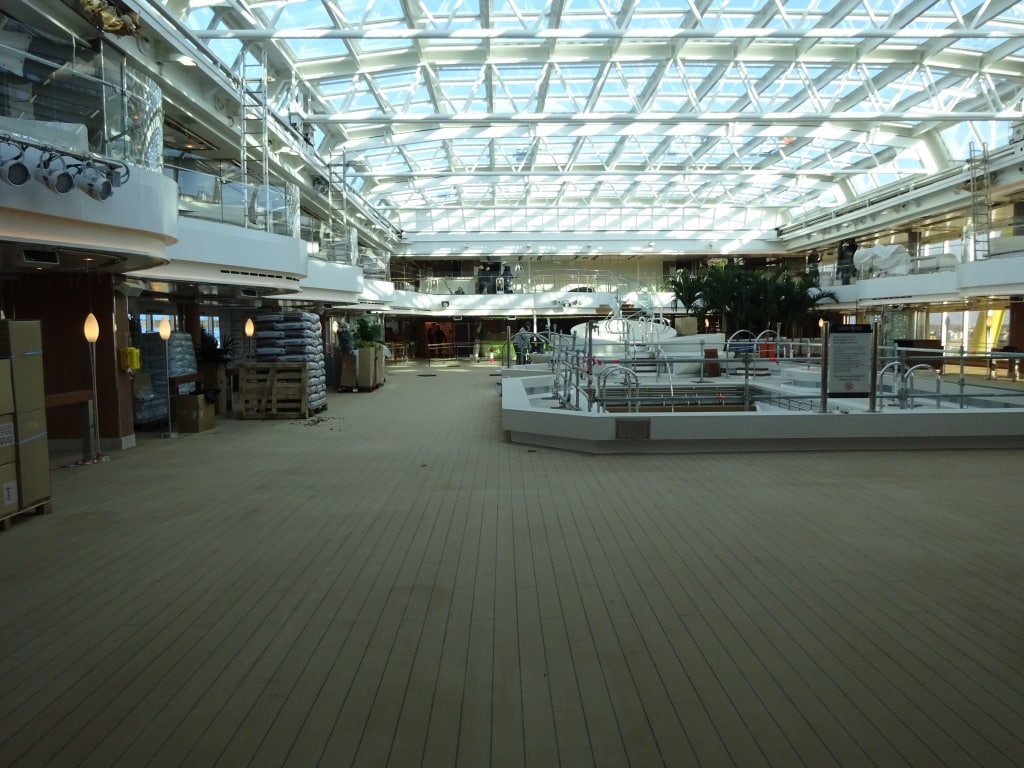 The ships Magrodome. The Close or Open option could greatly affect the measurements if the rules had not foreseen it. This photo was taken during the building period when they just had started loading the pots and plants. All that garden soil in those bags, does affect the displacement of the ship.