The wave field that I have been writing about that we would first miss and then not miss, intensified overnight and indeed came down to our track line. So by 11.00 the ship started to pitch considerably. Luckily the past two days have been very quiet and the current reasonably good, so we had built up some plus in the speed –to-maintain and thus I could reduce from 19 knots to 16 knots. That made the ship ride the waves much more comfortable but it was still a very bouncy affair.  I felt really sorry for the people on the Zaandam who are in the middle of it and had this weather all the way over from Hawaii.  But we also had to live with this wave field which lasted for the remainder of the day. Current projections are that it will diminish in the early morning and then be gone around 13.00 tomorrow; not pleasant but after this long cruise most guests will have trained their sea legs and thus it should not affect them too much.  At least I did not notice anything as my Hal History lecture drew a full house as unusual.

We have done great activities for the guests in the last few days, Village Fair, King Neptune, Show buffet and thus it was a more tranquil day for the guests, which worked out nicely in conjunction with the wobbly weather. Still the daily program was full from early morning to late evening.  My day was filled with clearing up paperwork, writing my handover notes for my relief and seeing to a whole pile of emails that always seem to pop up near the end of one’s contract.

For public functions, there was the 2nd Mariners luncheon to address, the captain’s table to host and then the Black and Gold Officers Ball.  This cruise we have to do 3 mariners luncheons. Normally there is only one or two but this time nearly all the guests are Mariners and thus we had to split them up in three groups. The lower dining room can only take 420 in one go. Tomorrow there will be the last luncheon. 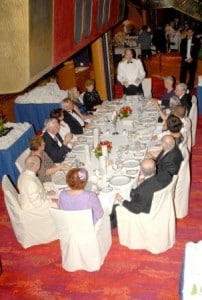 Captains table, created by connecting two small tables with a bridge in the middle.

Throughout the cruise I have been hosting captain’s tables. With six formal nights on this cruise, I went for the system of inviting the guests with the highest number of sailing days. So we started with the President Club members (nearly 1500 days) and worked down the 1000, 700, 500 and 250 day holders. Normally the captain’s table can hold 8 guests, the captain and a hostess but for this cruise I needed more seats and so I had a larger table constructed that held 12 guests and two extra hosts. By having four officers at the table, it would be possible for each guest to have somebody to talk to, or “to break the ice”.

The routine is then to invite the guests for cocktails at 18.30 until 19.00 then take them all for a photo on the Atrium staircase and have everybody seated by 19.15.  The whole dinner then lasts until 21.30. 6 stewards, an asst. DRM and the DRM are in attendance and the whole procedure goes forward accordingly to a strictly timed protocol, although that is something the guests do not notice. It has more to do with making sure that the kitchen sticks to a schedule.  The table has a special menu and quite often the Exe. Chef grabs the chance to try out something new. 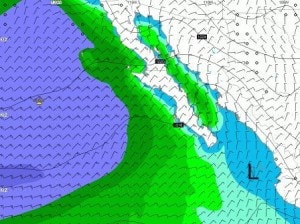 The Statendam in the middle of the wave field. Grey is 9 to 12 feet and Green is 3 to 6 feet. Tomorrow we should be in the green again.

Also this time it was finished by 21.30 and that gave me 40 minutes to get to the bridge and to see if we were still in the wave field and if there was an update about when it would finish. Predictions were still the same, tomorrow by lunch time.  That meant that we would have a bit of movement on the dance floor and that might scare some guests away.

By the time all the officers lines at at 22.10 for the meet and greet, there were less guests coming in than normal, but those who were there were all dancing, including our oldest guest on board of 94 years old and an a spritely couple of 65 years of marriage.  Thus for an hour the Showroom at Sea harkened back to the days of the North Atlantic, to what that they used to call “The Sway of the Grand Saloon”.

Tonight the ship will continue to move about a bit but by tomorrow morning things should settle down again.  Due to this weather system from the North it should be a much cooler day with temperatures just touching the 70oF or 21oF.