When I was on the Zuiderdam I blogged about the ships movement when going from Aruba to Cartagena and from Cartagena to Panama. The strong Trade Wind pushing in the back and the subsequent waves & swell caused a corkscrew motion of the ship. All with the stabilizers doing their best but limited in their success. On this run we are going the other way. So we do not have following seas which catch the square stern and lift it up; now the sea movement hits the pointy bow and lifts it up. The result in a similar movement but at the same time different.

A landlubber would call both movements lurching but for the professional it is different. While the corkscrew motion via the stern is a sort of regular rotational sway with the occasional interruption, the movement on the bow does not have this pattern. The sea hits the bow and often the bow just cuts the wave in two.  Then once in a while there is a slightly larger wave and then the bow gets lifted up and pushed down again. Then the waves are lower again and they just cause he ship to roll, something the stabilizers then try to prevent. Stabilizers work the best with a regular pattern so the gyroscope which controls them can give a regular signal to the stabilizers. That regular signal is erratically interrupted when the bow is being lifted up. Not enough to really pitch (when the bow starts to slam on the water) but just enough vertical movement. The end result is a lift of the bow and a wobble. Then for a short time nothing. Then a sway followed by a wobble and a lift. (A wobble is not really sailors speak but I use it to indicate an unbalancing movement). We kept that sort of movement until early this morning when we changed to an easterly course heading straight for the Boca Chica Pilot station.

The captain had decided to arrive an hour earlier. Keeping up the speed for a full speed run, does not cost that much more fuel; as normally one saves more if you can switch off more of the engines in port. Thus we were docked around 11.00 hrs. instead of 12.00 hrs. At the same time he also decided to give everybody an hour more in port which benefits the Guests and also the ship, as with a 1700 hrs. departure everybody comes back at the last minute and we sail at 18.00 hrs. due to the delayed boarding. But if we set departure at 18.00 hrs. Guests start coming back more gradually, aiming for their perfect moment for dinner or happy hour, and we still sail at 18.00 hrs. as nobody wants to stay ashore after sunset. So the result is the same but the approach is a bit more service orientated.

While Costa Rica was mainly Eco tours, Cartagena has a lot of history to offer as well so we have boat and bus tours that go to the old forts, city tours with shopping or without shopping (which still has a little bit of shopping to avoid people having withdrawal system if they cannot buy the final T shirt) and bird and emerald tours. 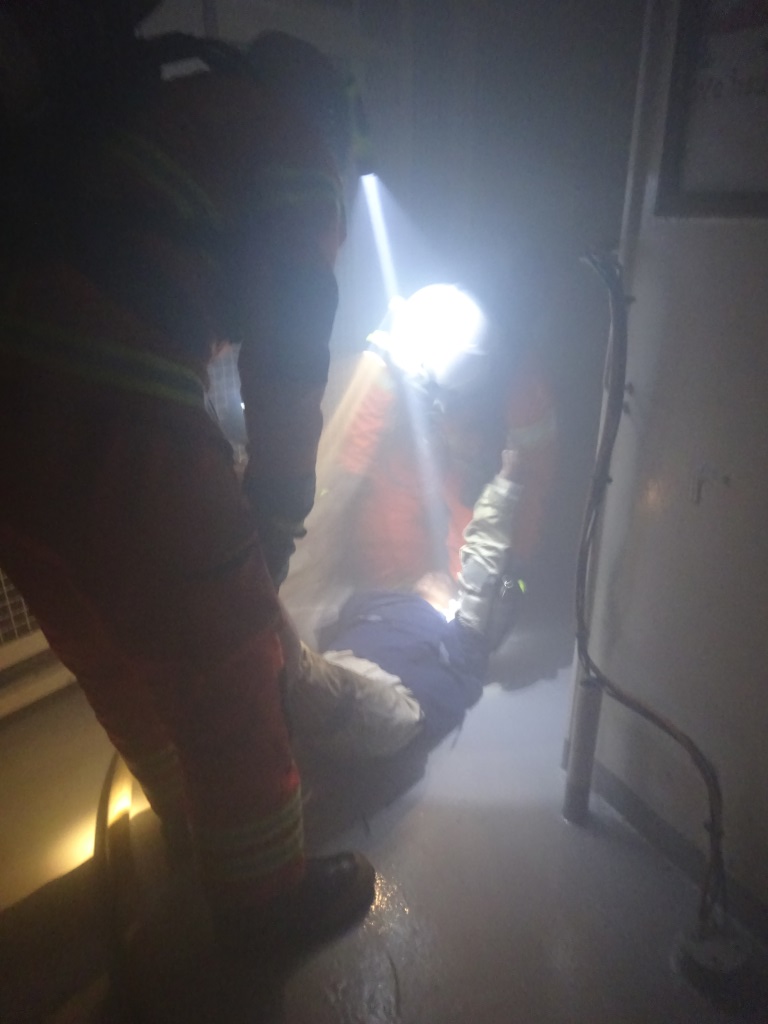 In a pitch dark bo’sun store with smoke drifting around the fire team searches for a casualty.

Today we had the full cycle of three stages in one drill and all 700 crew involved.

Escalation to Crew alert = Captain requires ALL crew to assemble and report for their specific duties.

Escalation to General emergency Alarm = Assembly for eventual abandonment of the ship if needed. 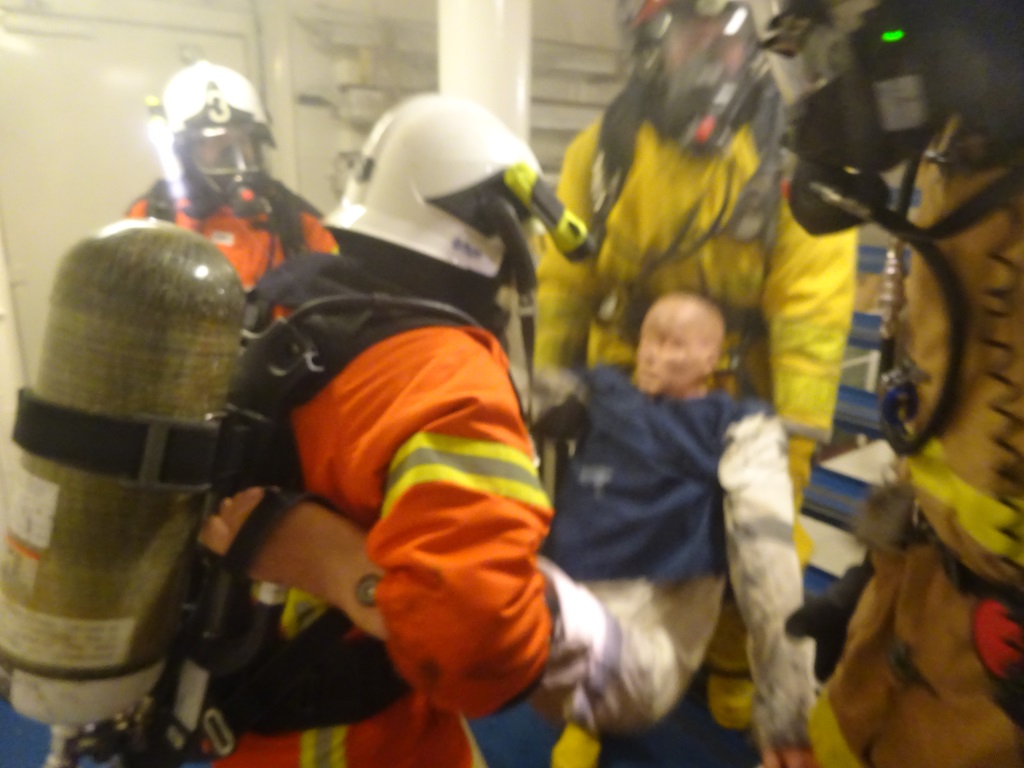 Meet Mr. D Ummy our most abused team member. He is sent into raging fires, thrown overboard or down staircases or like here manhandled up the stairs out of the fire zone, to where medical is waiting to try and keep him alive. They always do so as he will be volunteering again for the  next nasty idea that I come up with.

Today it rolled from fire into standby and then into abandonment, while at the same time we had a casualty in the fire but also a guest (a star role by one of the cadets) who fell from the stairs so the Medical team had to split into two and juggle a team of five over three locations. (Two casualty locations and the infirmary)

We will now have two days at sea before we come to Half Moon Cay, our last port of call, before the cruise ends in Ft. Lauderdale. The forecast is good, but I am a little bit concerned about a large weather front currently laying over the Barbados. Still far away but it might be pushing a lot of wind and waves ahead of it, 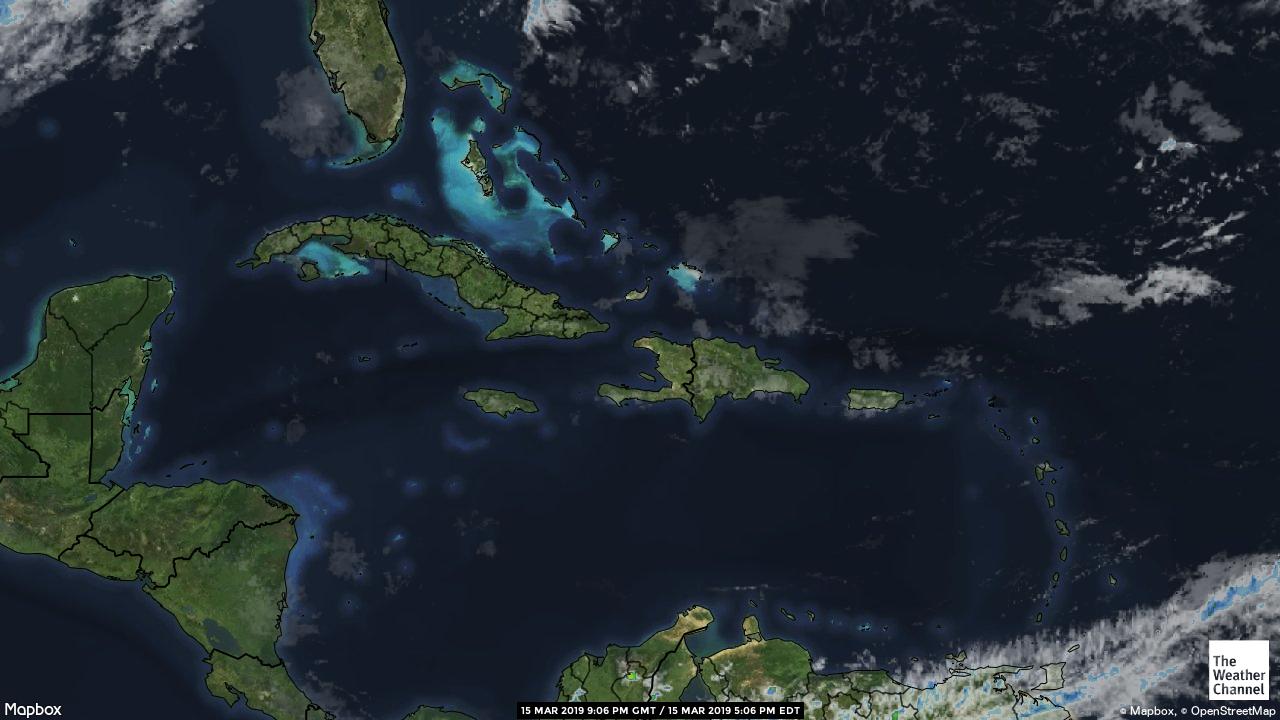 The Satellite picture for today. Mainly clear skies with some rain clouds north of Hispaniola. But to the South East there is a large band of rain moving in, and even if it does not get to us, it might still generate waves and wind.