As expected and scheduled we arrived at the Breakwater of Cristobal at 05.15. In the last half hour we were called by Cristobal Signal station not to be too late and of course when we arrived we had to slow down as the Island Princess, ahead of us, was held up by a late out coming ship. Some locals call that pattern the slogan of the Panama Canal “Hurry up to go slow”. About 20 minutes late we arrived at the pilot station but that did not matter much as the locks were only going to be ready in about 2 hrs from that moment, giving ample time to go through the ritual of ships agent, clearing agent, fumigator, canal technician, first pilot, photographers going off, steaming up slowly towards the locks, panama canal crew on board, 2 more pilots on board, man with stamps on board……….., and then we were ready to move through the canal. The dark clouds remained in the distance and we moved in tandem with the Island Princess through the locks under sunny skies. The last sun we would see for the remainder of the day. The I.P. is doing one of those cruises, where you go through the Gatun locks, enter the Gatun lake, drop anchor there, tender all your guests ashore for the excursions and then at 1800 hrs go out through the locks again. During our transit we saw several sightseeing boats full of Princess guests going through the canal taking photos of the Statendam, always nice. Our Zuiderdam does something similar as well on a 10 day cruise from Ft. Lauderdale. We were number 2 in the convoy and thus we did not have to anchor to wait to get into the convoy line up. Instead we sailed on a very slow speed through the canal. When coming out of the Gatun locks the pilot had handed me the conn back as he had to go to the toilet but when he came back he was quite happy to let me do the job. So for the first time in 30 years I sailed my own ship under my own orders through the Canal. Only when in the locks did the pilot do the locomotives while I helped with thrusters and main engines to keep the ship off the lock walls. That is often a challenge as sometimes the locomotive drivers are not very concentrated and forget to follow the pilots orders on time, and with only 30 centimeters to spare between the ship and the lock wall, it means that you make a bang. That does not give any damage, as you can only hit the lock side with the flat of the hull, but it creates an almighty shudder and “bang” sound through the ship. We had rain off and on during the day, but again in the second locks it cleared well enough to see the new locks under construction. 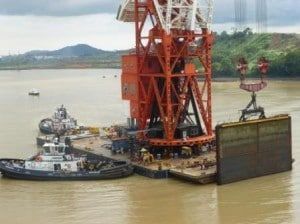 Here we had a more unusual encounter with the largest crane in the Canal, Hercules (a construction from Germany pre 2nd world war) which had lifted one of the gates out of the Miraflores locks. With the gate hanging in the crane and keeping it in the water so the buoyancy reduces the weigh, the crane has to go very slow and is difficult to maneuver. Thus I was asked to go around it. That was an interesting maneuver as the canal is not very wide here, and I basically had to go all the way to the red buoys, wait for the crane to pass and then come all the way back to the green side, as we were assigned to the West side locks. My logic would have been to let us go through the East lock which was also empty, avoiding this whole maneuver of going around the crane, but then I do not run the Canal.

By 1700 we were out and I was just planning to speed up, when the agent called in that they could not find the photographers. Their transport had not calculated in the fact that Panama City has one of the most creative traffic jams in the world and thus they were delayed by 30 minutes. By 1800 we were on our way and as Golfo Dulce is just around the corner, such a delay did not mean that much. For me very minute was important though, as I still had to clear up all the emails in the computer, accumulated after 14 hrs on the bridge.

Tomorrow afternoon we are in Golfo Dulce and I am keeping my fingers crossed for the weather. They say, if it rains in Panama, it pours in Costa Rica and today it rained in………………..