As was to be expected with three cruise ships in port, some our buses were delayed in returning from their tour and thus the ship patiently waited until everybody was safely back on board. That is of course one of the big advantageous of taking a ships operated tour; the ship will wait until you have returned. If you decide to organize something by yourself then it is important that you built in a good margin for delays as the ship will not wait. In my 38 year career with Holland America I have only seen or heard one occasion that the Captain (myself included) waited for an independent tour to return. Once when I was 2nd officer on the ss Rotterdam and an independent group on board had 8 buses out there, approx. 400 people. That was nearly half the ship and what do you do then? And once when I was Captain on the old Noordam and an independent tour had had an accident somewhere in the mountains of Jamaica and I thought it prudent to get them back on board to see the Doctor. And if they needed to go ashore for extensive medical attention then we could get them to a HAL recommended Hospital. With waiting I do not mean 5 or 10 minutes after sailing time, but a longer period which might affect the arrival time in the next port, or cost a lot of fuel to make up lost time. So normally we sail on time. 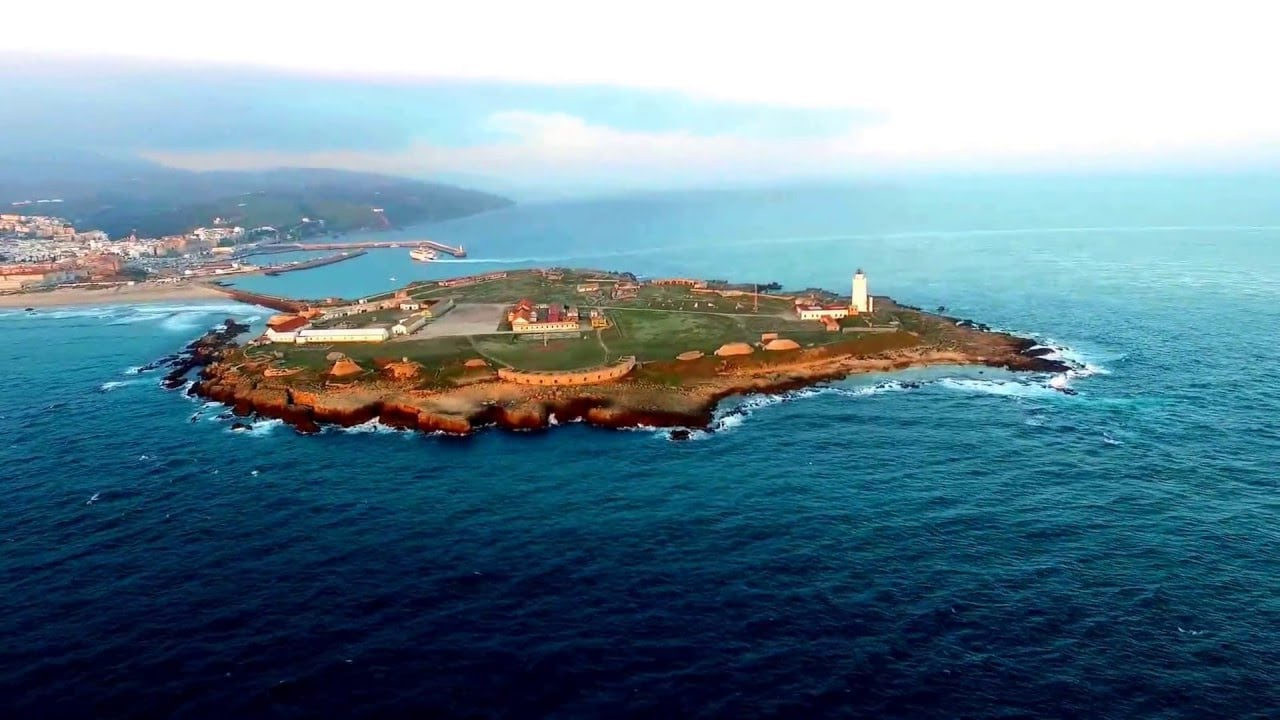 The island of Paloma. The town of Tarifa is to the left at the end of the causeway and the VTS Center is somewhere in one of buildings to the left of the Lighthouse.

Luckily the 30 minutes we stayed longer in Cadiz, sailing at 17.30 instead of 17.00 hrs. did not have much of an impact on the time between ports. Our next port is Barcelona and today is a day at sea and the ship can easily make it up. So we sailed down the coast of Spain, crossed over in front of the Gibraltar Straits to join the Eastbound Vessel Traffic Separation (VTS) lane at the African side and then followed the flow of ships back into the Mediterranean. And this all under the watchful eye of Tarifa Traffic. Located on the most southern tip of Spain. The more complicated or busier  VTS systems have a shore side monitoring center which ensures that all the ships are following the rules and for dangerous cargo ships that they also know what is being carried in case two ships are deciding to have a collision. These VTS centers are normally named after the town in which they are located and hence we have Tarifa Traffic, Dover Traffic (Dover Channel) and Tofino Traffic (Entrance Juan de Fuca Strait) and Vancouver Traffic when sailing the B.C Inside Passage. And there are a few hundred more, most of them operated by the local Coast Guard. (Note Tarifa is reason we now have the word Tariff in most languages. In the old days this was the port where they levied taxes on incoming goods.)

Most VTS’s are in narrows passage area’s such as the Dover Straits, Gibraltar Straits or Singapore Straits or where ships go in and out of a port. A more unusual one is the one we followed this morning. Around 08.00 hours we entered the VTS south of Almeria. This is a more unusual one as it is located so far out in the open sea. It was put in place as there were a high number of collisions between ships that bumped into each other while going around the corner at this S.E point of Spain. As the Spanish Authorities did not like that very much, they did two things:  A. moved all the traffic much further out to the open sea, B. installed a Vessel Control Center to keep an eye on the ships to ensure that they follow the new VTS system and do not try to cut the corner; but also that they do not do anything stupid while in the system. Both things still happen on occasion and then we hear some very upset Spanish voices on the VHF advising a sinner to correct his behavior. Sometimes such a ship does not react and then they are visited in the next port by Port State Control who will ask why and will also ask to see the chart or the navigation computer to ascertain what they were exactly doing on the bridge of that ship. Plus there might be a nasty fine as well.

In the olden days, ships would stay very close to the shore to save time and fuel, but if they could not always see each other then there would be a collision. Thus a VTS was established far out at sea, to protect the Spanish Coast but also the ships themselves.

It was indeed quite busy there with cargo ships going East West and/or North South and after we made the course change to North East in a safe way we headed up the coast towards Barcelona. Passing the island of Ibiza late this afternoon.

Tomorrow morning we should be at the pilot station at 07.00 hrs. and then be docked by 08.00 hrs. Barcelona has grown immensely as a cruise port. Going from using some spruced up cargo docks, to 3 dedicated (small) berths around the World Trade Center. Then was followed by a series of newly constructed cruise terminals which now stretch along the whole length of the inside southern breakwater. It will be a busy day in port with the Norwegian Epic, The Pacific Princess, the MSC Orchestra, the Koningsdam and the Symphony of the Seas are all expected. Also there will be six ferries present so it will be a busy day. For some unknown reason there is a ferry in port serving the Ibiza route which is listening to the very local name of “Bahama Mama”.

Weather for tomorrow: 23oC or 73oF, Gentle Breeze with a 60% chance of a local shower or thunder storm.

Note: for those who are interested, I just updated the Captains schedules for the coming year under the Tab on the right hand side of the blog, called Current Captains.