Last night after I finished my daily blog we had a little Dutch gathering to celebrate “Sinterklaas”. It is a feast from where Santa Claus originally came from. What is now standard for Christmas in North America was once imported in the 17th century from the Low Lands in Europe. It started in the ancient days when Nicolas of Smyrna (located in nowadays Turkey) became the patron saint of the sailors. There is a large St.Nicolaas church in Amsterdam which still recalls those days.  The same patron saint was also taken over by the Spanish and thus for most of the sailing community St.Nicolaas was somehow located in Spain.  Slowly but steadily this whole thing became a Children’s thing and involved getting presents. This tradition is still a very big thing in Holland, where on 21 November St. Nicolaas or Sinterklaas arrives by steamship from Spain. It is broadcast live on Dutch Television and the biggest presenters vie to narrate and present it. From the 21st. onwards the children are supposed to put their shoe next to the fire (or the Central Heating as this seem to work as well) with a little gift for the horse of St.Nicolaas. He rides a horse over the roofs and then comes down the chimney (or through the Central Heating pipe) to visit each house each night until December 5th. 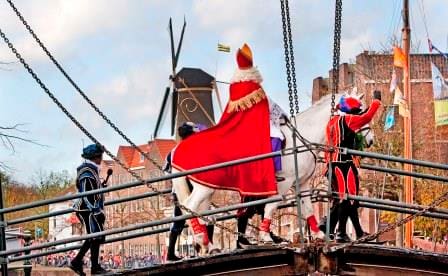 How more dutch can you go? Sinterklaas on a drawbridge with a windmill in the background. This was arrival in the town of Leiden.

The next morning there is then a small gift in return for the shoe owner; and the carrot or bit of hay are gone.  Slowly this builds up for the child until December 5th. which is the day before St.Nicolaas his official birthday. But as he is a holy man he does not expects gifts, he hands them out. On the 5th. there might be a chance that St.Nicolaas will visit your house.  If so, then it is a day of reckoning because if you have been bad you go in the bag and Black Peter, the Saints assistant, will take you back to Spain. If you have been good then there will be presents.  All around this core happening, there are songs, special cookies and chocolate.  The shop keepers normally have a grand time as the result of it. 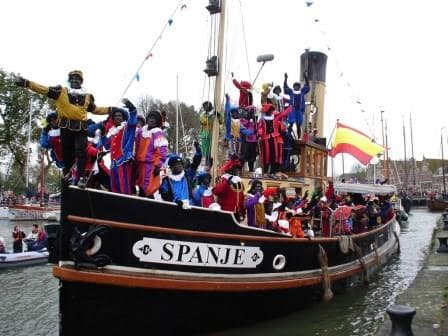 Big steamships are hard to find. Towns with canals normally have a restored steam tug or similar available. Here is the bow full of assistants called Black Peters.

The next day it is all over and the Saint disappears back to Spain. As far as we are concerned he then changes uniform, flies to the North Pole (at least for the North Americans, according to the Dutch he lives in Lapland) and remorfs into Santa Claus.  Then the shopkeepers have a 2nd bonanza as they try to convince the Dutch to give presents again for Christmas. For that purpose they have a legion of willing ambassadors; basically everybody under the age of 15 is firmly in favor of getting presents twice and as a result we have in Holland a sort of double shopping whammy.

For the grown-ups it is more of a party and the ones I like are the ones where we draw a name. Then we have to make a poem about something that happened in the previous year to the person’s whose name we drew, and buy a present which relates to the contents of the poem (Cost of the present is normally limited to about 5 dollars.) and then we have a hilarious evening when the “victims” recite their own mishaps and light embarrassments.

Here on the ship it was more of an impromptu affair with one crewmember dressed up as Sinterklaas and one as Black Peter and a group of Dutch speaking officers for a bit of laughter and fun. I did not stay that long as I cannot stand loud music but my class  enjoyed it and that is what it is all about.

Today we have a rainy day in Ft. Lauderdale. A very rainy and very windy day and one has to hope that it will get better when we go south. We had the K-9 dogs on the pier today, to sniff all the provisions and even they looked miserable. This is not the Florida that we see on postcards.

The good ship Westerdam will sail the same route again, Grand Turk, San Juan, Charlotte Amalie and Half Moon Cay. It is also the last week for the school class. Next time Ft. Lauderdale they will go home or they will join their first ship. One has already an assignment for the Amsterdam and the 2nd one might stay on the Westerdam. We will see. Exciting days for the team.