As scheduled I returned to the ship today after having flown into the port last night. The Prinsendam was not at her regular terminal due to the Eurodam being in as well and for the rest the port was full of the competition. Crown Princess, Oasis of the Seas, Navigator of the Seas, Seven Seas Navigator, Celebrity Celebration and the Carnival Freedom. All ships together bringing around 12,000 guests ashore and taking the same number out again. Together with crew coming and going it must have made for an interesting day at the airport. Not that my first day onboard was of less interest. Apart from the regular handover with my colleague, there was at once the question, will we sail on time? That is something that is not completely under my control as it mainly depends on the speed with which the longshoremen can load the stores and provisions; and the amount to be loaded. Going on a Grand Voyage means that we store much heavier than for a regular cruise as we had to take all the normal supplies with us for the full two months. During this cruise we will stack up on Food supplies and other perishables locally, but the rest, coming from American suppliers we load as much as possible in the home port. As a result you see a sudden increase in the amount of toilet paper being loaded, just to give an example. 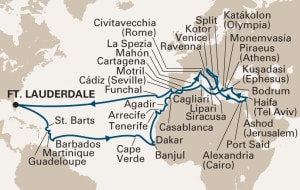 With the political unrest in the Middle East, my next question was of course; where are we going? Our head office had been monitoring the situation carefully on a day to day basis and had kept in close contact with the US State Department. The first thought is of course always; can we keep the cruise, as is, without endangering the safety of our guests? The guests book a certain cruise with certain ports and that is what you have to try to deliver. At the same time, you cannot wait too long with making a decision as it makes it much more difficult to substitute the cancelled ports with other ones. So while I was happily flying towards the USA, the head office reviewed the situation once more and made the decision to cancel the calls at Egypt. (Alexandria and Port Said) These will be replaced with a call at Dubrovnik and an overnight stay in Ashdod Israel. Not so nice for those who were hoping to see King Tut and the Pyramids but the local situation is far from stable and thus not the place to be. If things go well in Egypt we should be back in the autumn. So for the time being, those are the only changes to our 62 day African and Mediterranean Grand voyage. We will be back in Fort Lauderdale May 13 after which the ship will turn around once more and head back to Europe for the summer season.

In the end we sailed one and a half hour late but we had all our toilet paper on board. It won’t affect our arrival time in Gustavia St. Barts as we have sufficient lee in the schedule. In the end it was not so bad sailing later, as we now had the chance to see, with the sun in the back, all the other cruise ships leaving. I announced this accordingly to our guests and indeed many remained on deck to see one “Apartment building” after the other setting sail for open sea. With the port being quite compact, we were really sitting first row. Being the first one to arrive this morning, we were now the last one to sail out this evening while enjoying a beautiful sunset and dusk coming over Florida. The coming two days we are at sea and then we will come to our first port of call Gustavia. The weather looks good, a gentle breeze and only a low ocean swell while we sail North of the Bahamas towards the Caribbean.