We were the only ship docking at the Mahogany Bay Pier today, courtesy of the fact that this dock was constructed by Carnival Corporation. Therefore our poor competitors, in this case RCI, had to do with docking at Coxen Hole a little bit more to the west. There is another cruise terminal but with some fewer facilities on the dock for guests who do not want to go too far. And a lot of guests had one look at the weather: dark clouds gathering overhead causing the occasional downpour and decided to stay on board or were back quite quickly. Main reason was they had already been here before, so why get wet during a repeat visit? We have a larger number of guests on board who are just taking a “quick Holland America cruise” in between. They are here for the ship and the service and could “not care less about the coconuts” as one guest expressed his reason to stay on board.

Hence the High Tea was having a full house and all the bridge tables were occupied as well. Always nice to see the public rooms being in use at other times than just when there is entertainment or happy hour.

Apart from all the activities on board, Holland America has also made it a standard of its product of giving the guests something to look at. All the ships have a lot of antiques on board which can bring many hours of happy hunting and observing if you are so inclined to do so. With the Koningsdam what is on display is more contemporary but that is not bad for a change either.

So as part of my hobby (and hopefully for posterity as well) I photograph & document the complete interiors of all the ships; as one day also the Oosterdam will also be gone. Not all the art is on display where all the guests can get at it, some is hidden in the private offices on board. So today a few pieces of art to look at, which are hidden on deck 1 in the Hotel Offices. Senior hotel staff offices are gathered near the Atrium where we have on the portside the Security Officers Office, IT office, the Front Office (with inside the Pursers office) and the Cruise Directors office. 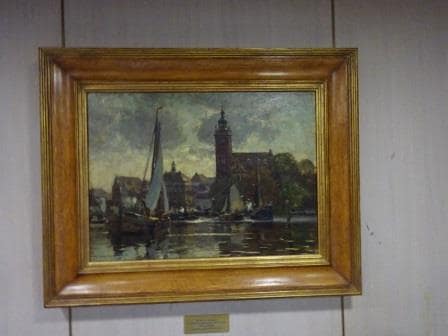 Boats in a Harbour by Heinrich Hermanns

From all those offices the Cruise Director has the nicest piece of art hanging on the wall. Made by a German painter Heinrich Hermanns who lived from 1862 to 1942 and the painting is called Boats in a Harbour.  Normally I am very critical of paintings with ships but this is a nice atmospheric piece. Sailors always look at shippy paintings with the eye……………… is it correct. And you can only let that go if there are no real details on it. One of the painters who is always very in depth and scrutinized by us, is the maritime painter Captain Stephen Card as we have his paintings hanging on each of our ships, mostly in the forward staircase. Luckily he is a sailor himself who carefully documents first what he is going to paint because if he gets it wrong, the old Holland America line employees are very vocal. 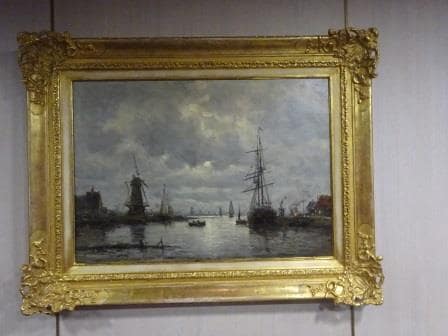 On starboard side we have the Controller’s office, shore excursion, Beverage department, Culinary Department, Hotel Directors Office and the Executive Housekeepers office.  The 2nd painting of my liking is hanging in the Executive Housekeepers office. Again a painting with a ship on it, this time by Nicholas Berthon 1839 – 1888 and called Dutch Harbor. Looking at the name it sounds like he is a French painter and this is the first time I see this name coming up in connection to something with boats.  Knowing how my company sources Art and also how much budget there is, plus the need to keep the art from “walking away” the price for these sorts of paintings lays normally in the area of 800 to 1500 dollars. Good enough quality to have on board for guests to enjoy, not expensive enough for somebody to be tempted to embrace it as a permanent souvenir. 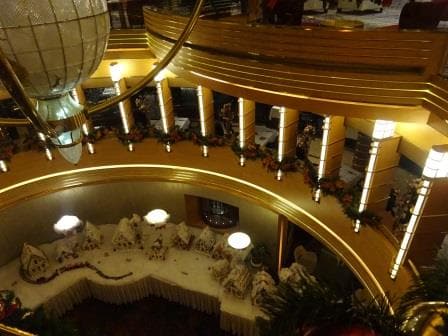 Not a painting but also art. A Christmas Village by the Oosterdam Culinary Department.

What I have forgotten to mention is that Christmas has fully arrived on the Oosterdam. During last cruise the decorations started to come out and by now everything is in place. Including the Christmas village in the Atrium. We have now Christmas Music played through the ship and to my utter amazement I have not heard White Christmas from Bing Crosby yet. All the other songs have all come by already including the missing two-front-teeth.

Tomorrow we are in Santo Tomas de Castilla in Guatemala which lays 142 miles to the west from here. And that means I am not going to predict the weather, as it might be the same as today; but it might just change as well, depending what pressure system wins the battle. The one to the south, the one to the north, or the one to the East.