St. Petersburg is a 3.5 hours travelling distance from the pilot station. Not because it is so far away but because the approach channels are so shallow that higher speeds cause too much squat and bow waves. Thus you travel the whole distance with speeds between 8 and 12 knots and then it takes time to get there. Hence we had to be at the pilot station at 04.00 to be near the dock at a good time. As all the cruise ships sail on similar schedules, it was to be expected that all of them would be at the pilot station around the same time. If you included the ships already docked, it was a real gathering of the cruise world. St. Thomas Virgin islands could be jealous of it. In the port was already the Queen Victoria (Cargo dock) the MSC Lirica (New passenger terminal) and the Seven Seas Mariner, Ocean Majesty, Seabourn Pride (Leutenant Smith embankment = inner harbor) To this fleet another four ships were going to be added.

The Silver Shadow led the way as she was going all the way in to the embankment and therefore picked up the pilot at 03.30. She was followed by the Costa Luminosa at 03.35. We were following the Luminosa at the sedate speed of 8 knots as the pilots had arranged to board the Costa Atlantica first at 03.55, followed by our good selves at 04.00. The Costa Atlantic had left Tallinn much later than we had and she had to race full speed all the way to St. Petersburg to get there in time. I had arrived on the bridge at 03.00 to be present for this spectacle at the pilot station. We kept the ship a bit to the north to give the Costa Atlantica sufficient space to come by and line up for the pilot. At the same time there were four cargo ships coming out and about 10 others at anchor; all in close proximity to the pilot boarding ground. A computer would get a headache trying to keep track of all that was going on. I always thought that Russians were reserved people and maybe they are, but definitely not when you give them a VHF to play with. Every channel was full of agitated chatter and other Russian noises. As the knowledge of my Russian is limited to “Spasiba” or thank you, I tried to ignore all of it while concentrating on the pilot boat and at the same time trying to avoid hitting the sea buoy. The wind had picked up during the night and the whole cruise community was nicely drifting all over the place.

With the pilot onboard, we joined the convoy and sailed towards St. Petersburg. We raced through Kronstadt with the phenomenal speed of 8 knots and an hour later entered the Commercial port as they call it, which is the cargo port. Here the Costa Luminosa was already docked and we had to sail around her to get to the berth. Why the pilots had not changed the arrival sequence so we could have docked first, a much easier and also safer option will forever remain one of the vagaries of Russian life. Thus I swung the ship around and backed up past the Luminosa to our dock. It is standard procedure here that the shore side does not agree with the place where the ship docks but in the end the dock master relented and I could park the Prinsendam at the best location for the gangway. We will be here for two days and we had some extra ropes brought out, as with lying along the canal, the ship tends to ride along the pier each time another ship comes by. 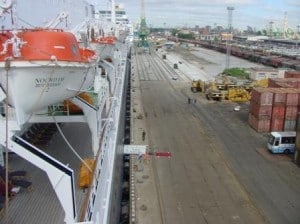 Photo of the cargo dock, taken in 2001 from the Bridge of the old Noordam. Not much has changed since then. Only where you can see the containers is now a wooden Immigration shed. Captain Albert Port Data base.

Tonight the Queen Victoria, The Seven Seas Mariner and the MSC Lirica will leave and replaced by The MSC Orchestra and the Mein Schiff tomorrow. It is going to be very very busy in the Winter Palace and the Hermitage.

I will happily stay onboard. I have more important things to do, namely to organize my wife’s birthday party. Today the weather was not that great, overcast with the occasional showers and tomorrow should be about the same.