As we are coming closer to the longest day of the year, it really does not get dark anymore. We do not reach the 66oNorth, e.g. the land of the midnight sun, but we are nearly touching the 60oN. The period of darkness is very small and because twilight lasts so long and there is the reflection of the snow capped mountains, dark is not the dark you would expect during the night. The fact that there is still so much snow on the mountains does help with keeping it lighter although this snow should have gone already. We are 11 days away from summer and we have not seen summer yet. Also today it was a mixed bag. The weather forecast was off on the wind; prediction wind still at the dock and it was blowing 20 knots and the only thing that made it good was that it hardly rained. Thus a reasonable day for disembarkation and embarkation. We had 1312 guests going off and 1276 coming on. Courtesy of more families leaving than joining. As I had parked the ship at the time required by the agent, the whole process went like clockwork and by 06.30 the guests were exchanging their floating hotel for a train carriage and were on the way to Anchorage. Then in the afternoon the trains and coaches make the return journey and by 1900 hrs. everybody is on board for the southbound journey.

Sewards docks from the air. The coal dock is behind the ship on that long narrow coal conveyor belt that is clearly visibile. If there is a coal ship docked before we come in, then it is really a tight fit for getting alongside.  (Photo courtesy Jim Somerville from his railroad site)

When you sail towards Seward you enter Resurrection Bay, which is a sort of Boomerang shaped bay with Seward at its very end. Once the whole bay was filled with a glacier and near the dock there is still a river ending in the bay that streams through the old path of the glacier. This is also the reason that this part of the Bay is really shallow as this is where all the sediment settled down. On low tides, the mud flats are exposed for nearly a mile. It also means that occasional dredging takes place around the dock and for the coal dock to our portside, a complete ships –hull-shaped hole has been dug out for a bulk carrier to sit in, so that it does not touch bottom on the low tide when fully laden. A full bulk carrier can only leave on the high tide, when the water fits the hull about 15 feet up.

When you enter the Bay, the first thing that you see, are the floodlights of the State Prison of Alaska. It is about as  remote a place to put a prison as you can think of. So remote in fact, that there is a story going around about two prisoners who escaped from this prison but who were found waiting outside the Gate again the next morning. They found out, that it was better inside than outside. Since that time no escapes have been reported. Because the bay is sheltered there is a lot of sport fishing going on and that brings its share of six-pack navigators and WAFI’s with them. At the moment it is not that bad yet but in July there is the Salmon Derby and then the place will be full of them. All totally focused on catching the largest fish and being totally oblivious to the world around them. This is one of the biggest headaches for the pilots here. Not so much when they are on a cruise ship but when they have to take the coal ships in and out. These ships are much less maneuverable than a cruise ship and also take a much longer time to slow down in speed. Plus the fact that the bridge is located at the stern and when looking forward there is a much larger blind spot than on ships that have the bridge more forward. That blind angle gives the nerve racking situation that when you think you have cleared a fishing boat, you are still not certain because you do not know what that boat might do while it is hidden by the bow.

While we were docked in Seward a nasty depression raged outside near Sitka. Only for a short while but when we came outside it had been enough to send a nice swell this way. It made the ship pitch a bit but as we are on a slow schedule for the run to Glacier Bay, the movement will not be too bad. 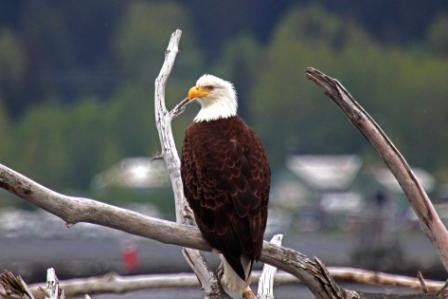