I was amazed about the internet last night. When I verified the weather for today, I typed in Half Moon Cay instead of Little San Salvador Island (which is the official name) and Low and Behold the weather forecast popped up. So the Weather Guru’s must have decided that HMC was an official enough name to add it to their database. Holland America is going up in the world…………. And they were right with the weather. The sun was there, the clouds were not there, there was just a bit more wind than anticipated. 30+ knots on arrival. Lessening to 20 knots during the day. If we would have been there with the Prinsendam it would have been complicated but the Nieuw Statendam has so much power that staying in position was still a doddle and we had a very good day.

The good ship Nieuw Statendam is now one year old and life on board has really settled down and things are running on a nice routine. The guest ratings are high, even so good that HAL was chosen by the Australian Members of Cruise Critic as having the best Entertainment out there. No doubt due to the Music Walk around which the whole Pinnacle Class has been designed.

The American side was more focused on food, and there they liked the various concepts that all the ships have, although not all the ships have a Tamarind or a Sel de Mer. Still we have a Pinnacle Restaurant on every ship and that one was singled out as well.  Our Itineraries were appreciated as well and if I understand the write up correctly it is a direct reference to what our Maasdam is doing with visiting all sorts of ports in the Pacific which are more off the beaten track. If you want to do long, very long cruises, then this is the ship to be on. Past winter season it was possible to do 195 days without repeating a port.

One thing I was disappointed about is that we did not get an especially high rating for our Lido operation. I mentioned a few days ago that in my opinion the HAL Lido operation stands on a very high level as well. So hereby the “Captain Albert Reward” for Lido Food, variation, quality, presentation, taste and service. My wife and I sailed with 4 competitors in the last year and none could beat our Lido.

Due to specific tastes it will be hard to please everybody and one of those things is that we do not have is kettles in the cabins. (Which to the eternal horror of my very British Wife I call it a Water Cooker) This is a typically British obsession that one shall have a cup of tea before anything else happens. There is room service but that is obviously not the same. All the British I talked to, they all love Holland America and in the next sentence the lament comes up: No kettle in the cabin. But it is only done by ships who sail for the British Market and companies who relocate to the States for the winter take the kettles out again. Why, because it has been observed that those who do not know what that kettle is for, use it for cooking noodles and boiling Chocolate Milk. And that is against the British Constitution. One shall only use a kettle for boiling water.

We area sailing this cruise with a full house again and with even a few more guests than last cruise as there are more families on board. That means that the bunk beds and sofas in the cabins are now in use. The larger number of families, younger families, also translated in the speed with which they “evacuated” the ship and joined our Shore side landing craft for “invading” the island. Security had their hands full with directing everybody to the correct gangway.

This photo was taken during a previous call. But two HMC tenders alongside waiting for the ship to be cleared.

When we arrive at Half Moon Cay we have for a brief moment 3 shell doors open. One for the arrival of the Bahamian Customs Officers who do an initial clearance of the ship. (Checks the Health Protocols) That that gangway is supervised by one of them to allow the working crew (about 80 to a 100) to go ashore to prepare the island. Then that shell door is closed again while the Guest clearance is in progress. The 2nd tender, for the guests, is allowed alongside but nobody can board this tender until the clearance is completed. The 3rd shell door is for the Half Moon Clipper to load all the Food and Beverages for the island. Nobody except the ship’s crew can get to that shell door so Customs has no issue with that. But this morning the eager beach go-ers had seen three boats coming alongside at the same time and then descended via every possible staircase they could find, to get towards those boats. But Security was in position and they all had to wait until the final Clearance stamp had been placed.

Tomorrow we have a sea day as we are heading towards Falmouth, Jamaica. The weather tomorrow will be good although for the portside cabins it will be very windy, as they will have the Trade Winds full on the balconies. The Trade wind which are back to their normal 20 knots of velocity and most likely a bit more later in the day. For the wobbly part we should be ok as we are sailing south into the Caribbean Sea, we will be protected by the Bahamian Banks and later by Hispaniola. And at the moment it is only very nasty on the west side of Europe anyway. 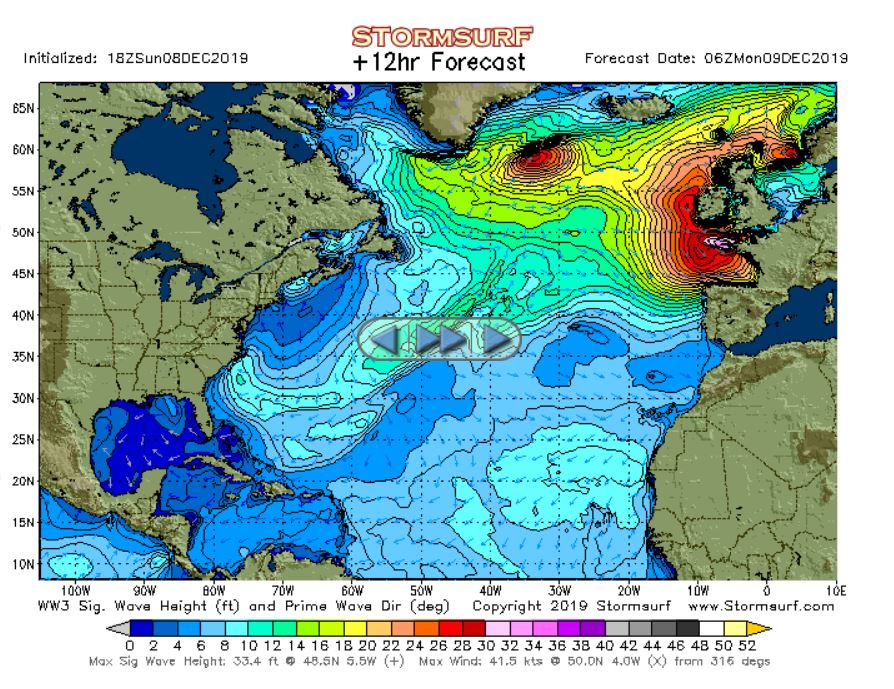 At the moment the North Atlantic is not so bad. At least not close to the Caribbean. We are heading south towards Cuba and we are in the blue all the way.