As was forecast it was a windy morning with about 25 to 30 knots blowing from the North East, while the Ocean Liner parade was lining up at the pilot station. Everybody was nicely on time and with a 15 minute sequence one cruise ship after another slipped into the port. While this lining up takes place, there are a number of more or less unusual routines carried out. First there is the rule to adhere to, not to come within 2 miles of the sea buoy before the pilot is on board. By doing that the pilot boarding and approach area is nicely kept clean of all sort of drifting ships that otherwise might parked themselves there. The second ritual is doing an astern test. This is a USCG requirement but more meant for ships where the engine has to stop and then reverse. It happens occasionally that such an engine does not do that and then you can have a serious problem when you want to slow down. After a long ocean voyage where the engine has been on full ahead all the time, this testing before coming into port then ensures that it still works. We are diesel electric with pitch and that means that we can only pull the handles astern and see if the pitch setting follows. We do that every time when we enter an American port. The third part of the ritual is to call the Night Auditing Officer and advise him at what time we pass the 3 mile boundary from land. When we are in Florida waters we have to pay Florida taxes over what is sold on board and thus he has to know at what magical moment he has to push the red button. Then the Florida Sales tax is automatically applied to each purchase on board. When we go out of the port, we do the same thing again and the sales tax stops. As you can see it is not all just about getting the pilot safely on board and then racing into the port. 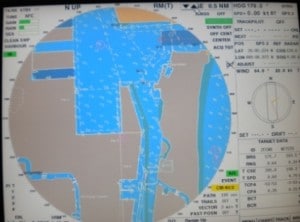 Happily alongside Berth 21. Berths 25 and 26 are to the right on the radar.

Even with the pilot on board, there is not much of a race as the ships have to keep equal distance while coming in. The first one, the Island Princess, swings in the port and then goes astern to berth 1 which is the regular Princess dock. The Seabourn Quest opted for docking nose in, so did not need to swing, she simply passed by the Seabourn Spirit at berth 25 and docked at 26. This is the regular Holland America Line terminal but for operational reasons it was handier to have the two Seabourn’s next to each other and thus the Statendam was relegated to Pier 21. Not that I minded as this is a much easier pier to dock at. You swing into the wide central basin instead of having to back up into the Intra Coastal Seaway. When there is a ship at berth 25, then you have even less room and with having a windy day today, it is always nice if you can keep things simple.

That brought us to the end of our cruise and the start of the next one. Both cruises are/were sold out and thus we had a full turn over, but our provisions were hampered today by the inclement weather that lasted until lunch time. The forecast had been that by 0800 the rains and winds would ease but the weather was delayed in complying with that schedule and thus it took until 1300 hrs before the skies broke. Rain has a direct effect on the loading as the forklifts have to drive slower to avoid skidding on the concrete. Also the longshoremen do not like to get wet and thus very little happens when it rains. Still when it dried up, they increased their pace a little bit and that resulted not in being delayed in sailing. 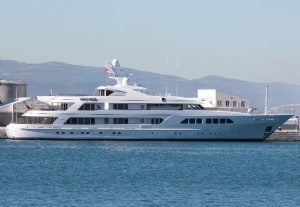 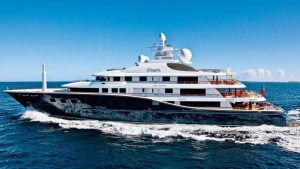 Majestic to the left.  Cake Walk below. Photo courtesy: unknown sources on the internet.

Apart from the four cruise ships we also had two yachts in port; the Majestic and the second one called Cake Walk. The first one for loading provisions, the second one for some engine maintenance. I do not know about the first one but the second one is available for charter for $150,000 a week. Very nice for a birthday bash if you have the spare change. I personally prefer the Majestic as it has a closed stern which is better for sailing bad weather with a following sea. Although with those yachts that seldom happens as they are meant to cruise in elegance with sunny skies and aquamarine colored flat seas while sipping something colorful. A totally different world to ours; we provide elegance, whatever the weather.

We left right on time and by 1800 hrs we were well on our way bucking the Gulf Stream. That will last until about 2100 hrs then we enter the Santaren Channel where the current falls away and we only have the opposing wind to deal with. We will keep strong winds at least for the next 24 hrs due to an Easterly flow lying north of the Caribbean Sea. For the rest it will be nice.