Last night we did our next “zig” back across the Irish Sea towards Belfast in Northern Island. Located at the North Eastern tip of the island it is the part of Ireland that stayed with the United Kingdom. For years there were the “troubles” which had as one of the side effects that no cruise ships were calling there. Since peace has returned to the area, the cruise ships have returned as well and Belfast is now a regular port on the cruise agenda of the Prinsendam. Together with Dublin we visit the port every year once. Although the high pressure system over the UK is slowly moving away, it still had enough power to ensure that we had a very quiet, if rainy day. Wind still on arrival and wind still on departure. Sunshine on arrival followed by overcast and then rain in the afternoon. Also we docked at another pier than usual. Although Belfast does not have a dedicated cruise terminal, yet, we normally dock at a re developed cargo pier called Stormont pier. However as this pier had already been occupied by containerships on a regular schedule, we were relocated to the other side of the harbour. 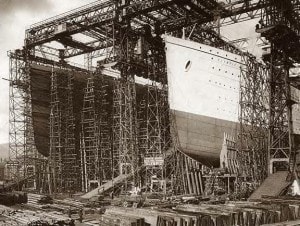 The Olympic (white) and her sister the Titanic (left) on the stocks at Harland & Wolff. They were the biggest ships in the world when constructed at the shipyard whose main location was right behind where we docked.

This was the area where the famous Harland and Wolff shipyard once stood. Builders of many legendary passenger ships which also included some Holland America Liners such as the Nieuw Amsterdam of 1906, the Rotterdam of 1908, the Statendam/Justicia of 1915 and the Statendam (Casco) of 1921/1929. These ships fade ofcourse in importance compared to that one other ship: Titanic. Together with her sisters the Olympic and Britannic, she was built here in 1911/1912 for the White Star Line, who had all their ships built at H&W. The yard is gone now but some remnants still survive including the graving dock especially constructed for these three ships and some buildings adjacent to that dry dock.

We were docked at the part of this huge complex that is still in use as a repair yard. And therefore we were docked at the ship repair quay. The road that led to the repair quay was called the Workman road and thus it all had a very shipyard feeling over it. Inclusive the steel recycling centre opposite which was processing steel left over’s for transport to a melting furnace. There is the intention to turn this part of the shipyard, which is not in use anymore, into a cruise terminal in the future but there are no definite plans as of yet. Still it was a good dock, so I was quite happy to park the Prinsendam alongside it.

Belfast is the main access port for Northern Island and has therefore all the ferry terminals. Both for cargo and for passenger traffic. The biggest operator here is Stena Line which also maintains regular services between Holyhead and Dublin and many other places in Europe. As a result this company is also the major supplier of pilots in these ports. Yesterday in Holyhead the pilot was a Stena man and today it was the same again. Not unusual ofcourse; when officers start thinking of raising family’s, they want to be home more often. Then firstly ferry work is selected over deep sea sailing. You go from 4 months away to two weeks away. Choosing for a pilot’s job reduces these times even more. Many pilots work on a rota of 5 to 7 days on standby and then the same period off. Even when on standby, you still sleep at home and thus you are still involved in family life every day. So going from the ferries to Pilotage is a natural progression.

Holland America is “suffering” from something similar. Many First and 2nd officers officers, disappear into the Dutch Pilotage every time when there is a new intake. Good for the Pilotage and good for the officers themselves but hard for the company. Most of the officers who leave are just getting close to promotion up the staff ranks and now that regular promotion pattern developed by the company is falling apart due to so many officers leaving. Next year there is a Pilotage intake again and I am already bracing myself for the next drain of experienced officers from our ships. I am already training up young officers as fast as I can to be able to fill the gaps if and when they occur next year.

We sailed out of Belfast at 22.30 which was the deadline before the tide was getting to low for our draft. It was wind still and the proverbial “silence before the storm”. Gale warnings were announced on every VHF channel that we tuned into. Tonight we “zag” back across the Irish Sea to Peel on the Isle of Man. The forecast is SE winds force 7, but if the wind is really SE, then we might stand a chance of making the port and running a safe tender service.